The media giant experiences a rare dip in domestic park attendance and an even more problematic slide in the segment's operating margin.

Disney (DIS 3.30%) investors were thrown for a loop this week. The media giant posted mixed financial results, stunning the market by revealing that attendance had declined at its domestic theme parks. Challenges at Disney World were expected. Ticket prices have soared over the past year, the weather has been brutally hot, and the Florida resort hasn't opened a major new ride this year.

Everything should change later this month when Star Wars: Galaxy's Edge officially opens. It's Disney World's most anticipated opening in 21 years, but the same 14-acre expansion opened at Disneyland in late May -- and it obviously wasn't enough to juice up turnstile clicks at the original California resort. Things will be different on the East Coast. Let's go over why Florida's version of the Star Wars-themed land will be a bigger deal to Disney's top and bottom line. 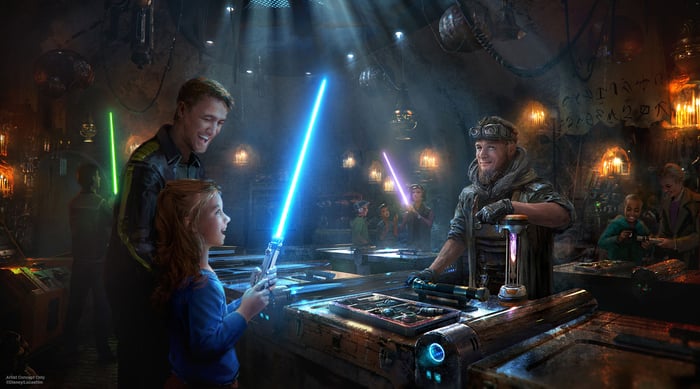 If Disneyland took on Disney World for a game of Monopoly it wouldn't be a fair fight. Disneyland has three on-site hotels, offering a little more than 2,200 rooms. They're not cheap, and even the value-priced option starts at $459 a night this summer.

It's a different story at Disney World, where there are more than 30,000 rooms across more than than two dozen on-site options. This matters, because Disney loves a captive audience. It has a fleet of shuttle buses at Disney World, picking up guests at Orlando International Airport at no additional charge. It then provides a growing number of complimentary transportation options to get around the massive resort, including advance access to expedited FastPass queue reservations a month before everybody else. The longer the stay, the lower the per-day ticket prices are, too. In short, Disney World has a much larger built-in audience, and it knows how to pull the levers to keep guests close.

Disneyland and Disney World offer their hotel guests access to select parks an hour before day guests are allowed into the gated attractions. Disney World also offers guests a few hours of access after select parks close. Disney World is giving early risers a special treat that Disneyland did not -- three hours of early morning access to Star Wars: Galaxy's Edge. For the first two months of operation after the mad flurry of the expansion's debut weekend, guests staying at one of Disney World's on-site properties will be able to get into Disney's Hollywood Studio at 6 a.m., experiencing Star Wars: Galaxy's Edge for three hours before everyone else can check it out. Disneyland didn't open its Star Wars-themed land until the official park opening.

This is a savvy move. Obviously it's going to fuel hotel reservations through September and October as folks try to get an early jump on day guests in checking out Star Wars: Galaxy's Edge, a big deal since this is typically the sleepy season for the resort. The early opening also means that the Star Wars: Galaxy's Edge will be open for at least 16 hours a day.

Disney World attracts far more visitors than Disneyland, and not just because it has twice as many theme parks, two water parks, and far more available land and lodging options. Disney World's Magic Kingdom is the most-visited theme park on the planet.

Let's serve up a very fresh example. Disneyland's Haunted Mansion celebrated its 50th anniversary on Friday, and there were themed festivities on both coasts. One would also expect that the ghostly attraction would be a hot ticket at both parks, and at 3 p.m. in the afternoon, Florida's Haunted Mansion had an 80 minute wait. At the same time -- noon at Disneyland, but still peak visiting hours -- the wait time was just 35 minutes. Even for the meaty milestone for a Disneyland attraction there is more interest for Disney World's model that came several years later.

Disneyland tripped itself up by limiting visits to a reservation system to visit Star Wars: Galaxy's Edge, something that Disney World could never do with its massive overnight audience clamoring for access. I saw the light crowds at Disneyland with my own eyes last week. I am fairly confident that I will see an entirely different scene play out in Florida in the coming weeks and months.