Forget smartwatches, heads-up displays in eyeglasses, or Elon Musk's planned Neuralink implant to connect the human brain directly to computers. Diapers are becoming the next frontier in wearable technology.

Both Kimberly-Clark (NYSE:KMB) and Procter & Gamble (NYSE:PG) have developed connected diapers for their respective Huggies and Pampers brands that tell parents via a smartphone app when Junior's butt-hugger needs changing.

And while knowing when a diaper is wet can be helpful in preventing rashes or infections, the technology is going even further to monitor pee and poo habits, sleeping patterns, and diaper consumption. How did we all make it out of infancy without this? 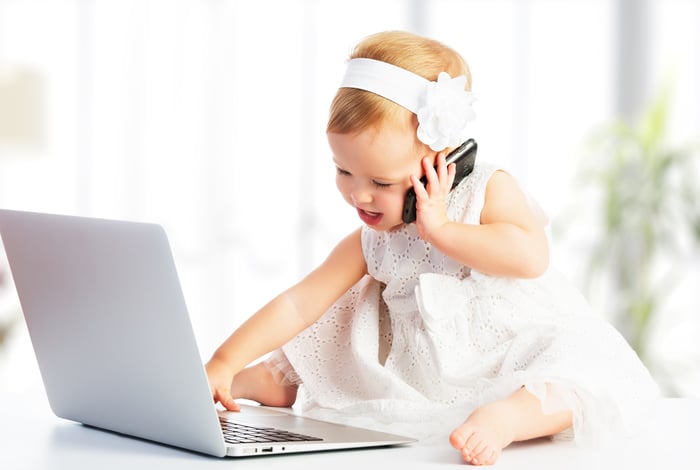 A dearth of babies

Necessity may be the mother of invention, but it's not likely there were many consumers clamoring with a need for a connected diaper. Instead, it was probably more a desire to find a new hook to keep market share amid declining birth rates that drove this latest technological advance.

The Centers for Disease Control and Prevention says the U.S. rate has fallen 16% below what is considered the replacement rate for the population, a situation Kimberly-Clark has acknowledged is difficult to overcome. CEO Thomas Falk told analysts last year, "You can't encourage moms to use more diapers in a developed market where the babies aren't being born in those markets."

But for new parents who grew up connected to their smartphone, luring them in with a technologically enhanced diaper just might do the trick. You could have a big seller and maintain market share in a way that designer diapers or denim ones never could.

Plugging in to diaper changes

Kimberly-Clark partnered with South Korean outfit Monit to pair the latter's Bluetooth sensor with the diaper. The sensor attaches to the outside and can tell when the diaper has been soiled, while also cataloging diaper use and the baby's sleep patterns. Monit also makes baby monitors and carriers.

Huggies tested a very similar device several years ago called TweetPee that also used an attached monitor to sense when the diaper was soiled and then send the parent a tweet advising of it. It never got out of the testing stage, though.

Procter & Gamble looks to be going Kimberly-Clark one better by combining a sensor with a Logitech (NASDAQ:LOGI) video baby monitor and a smartphone app for both Android and iOS and selling it as a package. The Lumi diaper from Pampers tracks not only sleep patterns and diapering history, but also feeding times while offering video monitoring from wherever you are.

The risk to both diaper companies is that the sensors are not exclusive to the brands. Once the sensor is purchased (along with the ancillary gear from P&G), it can then be used on any diaper, including cheaper private-label ones. (Kimberly-Clark noted in its most recent earnings conference call that private-label diapers didn't follow its lead when it raised prices.)

The lack of exclusivity could lead to lost sales and market share if parents buy the sensor and switch to a cheaper brand of diaper. Other baby-monitor makers like Arlo Technologies might also be able to extend their baby monitor brand by partnering with someone to add diaper sensors.

Of course, by continuing to use the Huggies or Pampers app necessary to receive the alerts and updates, the manufacturers can gain useful consumer insights on diaper use.

The nose has long been the best technology to let you know when a diaper has to be changed, and as connected as millennials are, even they might feel they don't need a special gadget to alert them.

By tapping into a baby's bowel movements and sending the resulting information out over the internet, Kimberly-Clark and Procter & Gamble are conditioning literal cradle-to-grave acceptance of always being plugged in, which is perhaps something only Elon Musk can truly appreciate.