Please ensure Javascript is enabled for purposes of website accessibility
Log In Help Join The Motley Fool
Free Article Join Over 1 Million Premium Members And Get More In-Depth Stock Guidance and Research
By Luis Sanchez CFA – Aug 10, 2019 at 9:58AM

It seems like every new IPO is a technology company, but investors are finally being served up something new. Kura Sushi USA (KRUS 2.75%) went public on July 31 and is only the second restaurant IPO of 2019 after Luckin Coffee debuted in May. Should investors take a bite?

Sushi on a conveyor belt

Kura Sushi USA is the American subsidiary of Kura Japan, a conveyor belt sushi chain in Japan with over 400 restaurants. The subsidiary was established in 2008 to bring this unique sushi restaurant to Americans and has ambitions to be a national chain.

The company describes itself as a technology-enabled restaurant where guests order food on digital displays at their table and items are delivered to them via a conveyor belt. This format is quite popular in Japan but is a novelty in the U.S., and that could drive store traffic to the extent that Americans are interested in something new. The highly automated system also reduces the number of servers needed, resulting in cost savings. 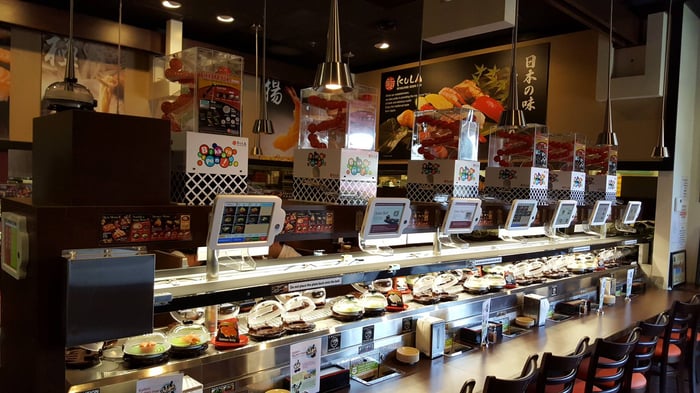 Kura Sushi USA uses midrange pricing. Most items are sold in small portions for under $3 on the conveyor belt, and a guest needs to order several dishes to fill up. In 2018, the average bill at its US-based restaurants was $18.37 per guest, or roughly six items. The menu features over 140 freshly prepared items, which leaves a lot of room for exploration and encourages repeat visits.

The Kura Sushi experience combines an authentic Japanese culinary adventure with the fun of the conveyor belt and ordering system. Every time a guest accumulates five dishes, the order screen plays a short anime video. Every 15 dishes results in a collectible Japanese toy being awarded to the guest.

For some reason, there are no nationally recognized sushi chains in the United States. With just 22 locations as of its IPO, Kura Sushi USA is already one of the largest by location count. The company plans to grow its restaurant count by 20% per year over the next five years and believes it can ultimately open over 290 locations in the United States -- over 10 times its current size.

Kura is growing rapidly, but it is starting from a small base. The company is adding several new restaurants each year, and the average revenue per store is around $2.7 million. But this is tough to measure at this point because new stores bring down the average. However, $2.7 million in annual sales per store is high compared with most quick-service and fast-casual restaurants in the U.S.

It is also impressive that Kura Sushi USA is profitable despite its rapid growth. Opening a new location is expensive as the company must invest up front in fixtures, staff, and marketing. The chain notes that its restaurant-level contribution margin was 20.1% in 2018. This means that restaurants have healthy profits at the unit level, before accounting for corporate overhead. But the company is still profitable after taking that overhead into account.

Perhaps it's profitable because it doesn't have to hire as many staff compared with other restaurants, or maybe sushi is a high-margin food. Regardless, the company is showing early signs that it can be very profitable at scale.

Is Kura Sushi USA worth investing in?

The restaurant industry is tough to invest in. It's an extremely competitive field plagued by low profit margins where a number of things can go wrong. But there is a lot to like about Kura Sushi USA. For one, its conveyor belt concept is highly different from other American restaurants. Second, it capitalizes on America's growing interest in Asian food. Third, the restaurants are already profitable and there is a clear plan for growth.

Kura Sushi USA went public at $14 per share after pricing at the low end of its $14 to $16 IPO range. The stock had a strong debut and now trades for over $20 and carries a market capitalization of around $200 million. If the company can grow to 200 locations in the next 10 years and each location produces $3 million in annual sales, then the market capitalization can swell to $600 million if the market values the stock at one times revenue -- roughly where restaurants trade. This could be wishful thinking, but it would be a decent investment if it came to pass.

Investors should monitor the company's growth in the coming years to see if it can maintain momentum. If it can execute well on its strategy, Kura Sushi USA could be a good long-term growth investment.

Why Is Everyone Talking About Kura Sushi USA Stock?

Why Kura Sushi USA Was Such a Tasty Stock Today