Shares of Spirit Airlines (NYSE:SAVE) plummeted 24% on the day after the fast-growing budget carrier reported its second-quarter results in late July. As I described at the time, this was an overreaction to the company's poor Q3 guidance. While Spirit's profit margin is set to contract this quarter, most of the damage can be traced to short-term cost headwinds and easily addressed tactical missteps.

In the roughly two weeks since the earnings report, Spirit Airlines stock has fallen even further, as part of a broader market sell-off sparked primarily by trade war fears. This has made the stock even more attractive for long-term investors. 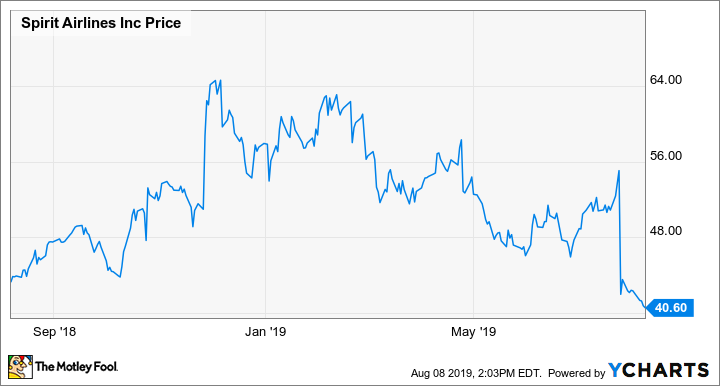 Spirit Airlines knows what it needs to fix

In the eight years that it has been a public company, Spirit Airlines has developed a solid track record for cost control, despite occasional slip-ups. In 2011 -- the year of its initial public offering (IPO) -- Spirit's adjusted nonfuel unit costs came in at 5.72 cents. By 2018, adjusted nonfuel unit costs had fallen to 5.3 cents. Most other airlines reported big unit cost increases over that time period.

Nevertheless, unit cost growth is the main problem plaguing Spirit Airlines right now. The carrier expects nonfuel unit costs to surge 7% to 8% year over year in the third quarter, whereas it had initially projected a tame 1% to 2% increase for this quarter.

This spike in unit costs is being driven by two main factors. First, Spirit Airlines has incurred additional costs to minimize the impact to customers of runway construction in Fort Lauderdale (the carrier's biggest hub). Second, the implementation of an aggressive schedule designed to boost aircraft utilization during peak periods has caused a sharp increase in weather-related flight cancellations this year, driving up unit costs in various ways. On the bright side for shareholders, the Fort Lauderdale runway construction is a one-time issue, and Spirit Airlines won't make the same mistake about aircraft scheduling again. As a result, Spirit should be able to gradually widen its unit cost advantage relative to peers in 2020 and beyond -- just as it has in the past. There's no reason to fear that soaring costs will crimp the company's margins in the years ahead.

2 reasons why the market panic could help Spirit Airlines

Spirit Airlines stock has declined along with the rest of the market this month. However, rising trade tensions with China will have little or no impact on the carrier, as it doesn't fly to China (or anywhere else outside the Western Hemisphere). Even a full-blown recession might not hurt much. In that scenario, Spirit's rock-bottom fares could become more attractive to consumers looking to save money, offsetting the impact of lower demand for air travel overall.

Meanwhile, the recent market turmoil could actually help the company in two important ways. First, oil prices have fallen by more than $5 per barrel since Spirit's earnings report came out. That will reduce jet fuel prices by about $0.10 to $0.15 per gallon. If prices were to hold at this level -- which isn't guaranteed, of course -- it would boost Spirit Airlines' pre-tax margin by up to 2 percentage points.

Second, interest rates have fallen sharply. The rate on 10-year Treasuries now sits at less than 1.8%, down from 2.1% just a few weeks ago and more than 3% last fall. This should help Spirit Airlines get cheaper financing for the dozens of new planes it is set to receive in 2020 and 2021. The carrier could also capitalize on low interest rates by buying some of the jets it currently leases, thereby reducing its future aircraft rent expense.

Considering that Spirit Airlines is still a relatively small player in the U.S. airline industry and has lots of room for growth, EPS could continue rising at a double-digit annual rate -- albeit with some year-to-year volatility -- for the foreseeable future.

Nevertheless, Spirit Airlines stock trades for less than eight times earnings. That represents a discount of more than 50% to the broader market's earnings multiple. It's also much cheaper than the valuation it has carried for most of Spirit's time as a public company. This makes Spirit Airlines stock seem like an enticing bargain for long-term investors right now.