Please ensure Javascript is enabled for purposes of website accessibility
Log In Help Join The Motley Fool
Free Article Join Over 1 Million Premium Members And Get More In-Depth Stock Guidance and Research
By John Ballard – Aug 10, 2019 at 11:05AM

The home goods seller is in a tug-of-war between investors who are looking for more profitability in the short term and a management team that is investing for long-term growth.

It was a typical quarter for the online seller of home goods. Once again, Wayfair (W 5.35%) posted impressive revenue growth, but more spending on new warehouse facilities and marketing took its toll on the bottom line. While revenue has soared to $8 billion on a trailing-12-month basis, the loss on the bottom line widened to $677 million over the past year.

The second-quarter earnings results were in line with expectations, but the stock has performed poorly since the report, declining about 4%. Is this a buying opportunity? 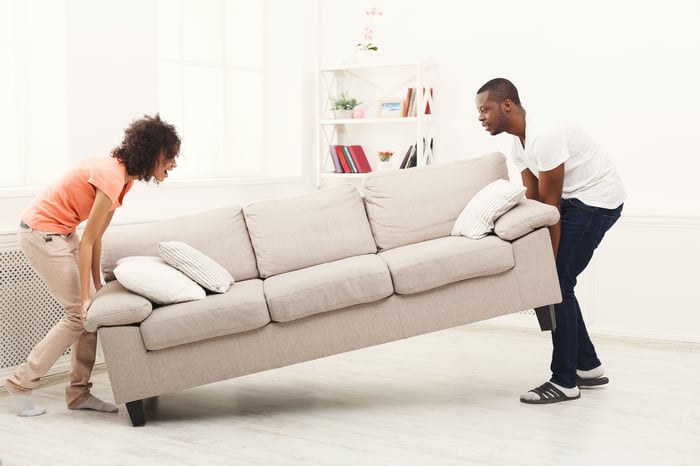 Standing out from the crowd

There's no better evidence of Wayfair's long-term opportunity than looking at its impressive top-line momentum. The company has consistently grown revenue by more than 40%, and the second quarter showed this trend continuing, with direct retail net revenue up by 42% year over year.

What's more, Wayfair continues to see more purchases from repeat customers. In the last quarter, repeat customers placed 67.8% of total orders, up from 66% in the year-ago quarter. Customers are also spending more per order, with net revenue per active customer up 1.6% year over year. These metrics are evidence that Wayfair is competing very effectively for wallet share in the highly fragmented home goods market.

Wayfair is distinguishing itself based on user-friendliness, technology that helps customers decide which items will look best in their home, and proper packaging of items for safe and fast delivery. These are things that even the mighty Amazon.com can't match right now, which explains why Wayfair is growing so fast even though about 30% of the U.S. population has an Amazon Prime membership.

Growth is getting expensive

The knock against Wayfair is that it doesn't report a profit. In the second quarter, the net loss widened, reflecting aggressive spending in advertising and new CastleGate warehouse facilities to drive growth. The company reported a net loss of $181.9 million, while free cash flow was a negative $91.5 million.

Management guided for even higher spending in advertising and capital expenditures in the third quarter, while calling for revenue growth to decelerate into the mid-30s percentage range. Some on Wall Street may think the company's spending is out of control, but another way to look at it is that management is expanding its distribution capability to meet the soaring demand and satisfy customers with fast delivery.

The company is starting to expand internationally in Canada, the U.K., and Germany, and the growth in those markets is just as strong as it is in the U.S. Management forecasts international revenue to be up more than 40% in the third quarter.

The cost to build massive distribution centers is very high but should have a huge payoff. A wider distribution footprint means that Wayfair can expand its selection into high-end luxury goods (e.g., the Perigold brand), expanding its addressable market in the process, and deliver orders to customers faster -- something that is already helping the company win in the marketplace.

Also, it's important to remember that management doesn't run the business for Wall Street, but for long-term investors. The profitability of the U.S. business has been hovering around breakeven recently, which suggests that management is being mindful about spending, contrary to the belief that the company is reckless with its money. In the last quarter, adjusted EBITDA (earnings before interest, taxes, depreciation, and amortization) came in at a loss of $342,000 for the U.S. segment, compared to a profit of $7.2 million in the year-ago quarter.

During the second-quarter call, CFO Michael Fleisher said, "We continue to believe we are on the path to sustained adjusted EBITDA profitability for the U.S. business, but repeat, that it will not be a straight line."

The outlook calls for the U.S. business to swing to a deeper loss in the third quarter as management spends more on marketing and infrastructure. In addition, the company is spending more on cloud migration of its data, which management expects will save the company a lot of money over time.

Wayfair is partnering with an unnamed cloud service provider to handle more of the company's data. This transition will cost the company between $10 million to $15 million in operating costs in the third quarter but will allow the company to significantly reduce future capital spending, thus boosting free cash flow.

The investment in the cloud is an example of how some of the costs Wayfair is incurring right now is to lay the groundwork for eventual profitability. Once that foundation is built, it will be enormously difficult (and expensive) for competitors to catch up.

During the call, Fleisher noted the benefits that are already coming from these investments, while also reminding investors of management's focus on the long term:

Based on management's long-term approach, the impressive momentum happening right now, and the huge potential in international markets, I think the drop in the stock price is a buying opportunity.