Management outlined a number of catalysts that will drive future growth for this inbound-marketing software specialist.

HubSpot reported revenue of $163.3 million, a gain of 33% year over year -- and up 36% in constant currency -- sailing past analysts' consensus estimates of $157 million and management's guidance range, which topped out at $157.5 million. The bottom-line results were similarly robust, with adjusted earnings per share of $0.37, more than double the $0.18 it generated in the prior-year quarter and well beyond the $0.24 to $0.25 range predicted by management. HubSpot also raised its full-year guidance on the strength of its quarter.

HubSpot's management provided a wealth of valuable information to shareholders on the conference call to discuss the results. Here are three important takeaways from that call. 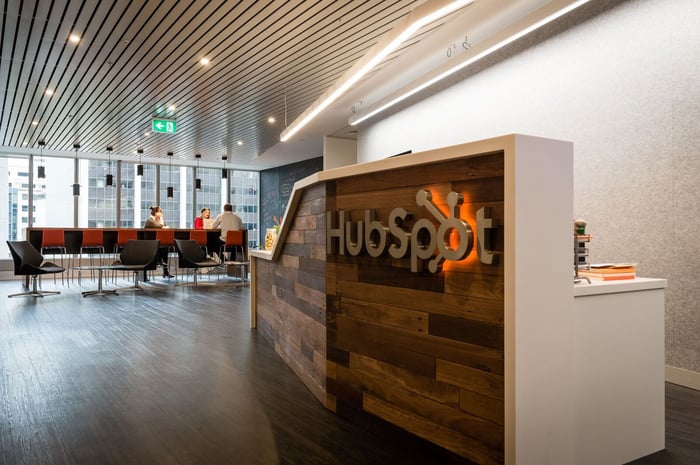 HubSpot has been investing heavily in its international efforts, and that strategy is paying off. Over the previous five years, the company has opened offices in Ireland, Australia, Japan, Singapore, and Columbia and recently opened its ninth international office, this time in Paris. The company is now doing business in more than 100 countries, and the success of its investments can be seen in the results.

International revenue grew 50% year over year in constant currency and grew to 40% of total revenue in the second quarter. This continues the trend the company reported previously, as revenue has grown by 50% or more year over year in each of the past four quarters.

The international market isn't the only big opportunity out there. HubSpot has been introducing new products at a frantic pace, according to CEO Brian Halligan: "Over the last year, we've rolled out the biggest expansion to our product footprint in [our] history with the introduction of a slew of new products and tiers that have filled in the gaps across our entire HubSpot suite. As we've done so, we've seen terrific cross-platform adoption."

The ability to get customers to adopt additional products makes the platform even stickier, part of the reason HubSpot has a customer retention rate near 100%. Halligan went on to say that the company reached nearly 25,000 multiproduct customers during Q2, and its most recent product, the service hub, has surpassed 5,000 paying customers.

HubSpot is increasing not only the functionality of its own suite of software tools but also the list of products that customers can use with them. HubSpot now has more than 300 apps that integrate with its existing platform, providing users with a growing range of functionality. The average customer now integrates more than five different third-party applications with HubSpot.

HubSpot's strong second-quarter results illustrate that the company's strategy is paying dividends. Each of the prospects outlined above makes it clear that HubSpot still has a long runway for growth. Its efforts will likely continue to gain converts and keep its market share growing in the months and years to come.