Blue Apron (NYSE:APRN) reported a narrower loss in the second quarter than Wall Street expected, and the market responded by sending its stock 8% higher.

Because it also recorded higher per-customer metrics, even as it lost another 101,000 of them since the first quarter, an 18% sequential drop, investors are hopeful the meal-kit maker's plan to focus only on its core customer will eventually payoff in a profitable business.

It is certainly possible that will occur, and it is already reporting profits on an adjusted basis, but then Blue Apron investors will ultimately have to be happy with their company remaining a small, niche business with little growth opportunity ahead of it. 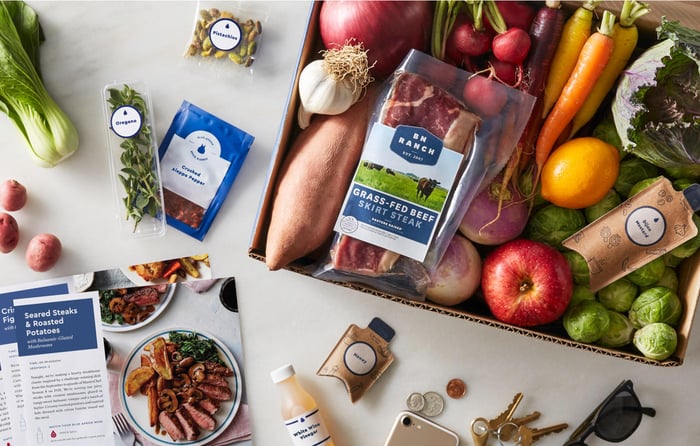 The drop in Blue Apron customers is a purposeful outcome from its decision to no longer pursue new business, but rather cater to the needs of its best existing customers. In the past, it found it needed to continuously spend significant amounts of money just to attract more people to the business to make up for all of the ones who ended their subscription after the trial period was over.

Its eyes are still bigger than its stomach

But it's also evident from Blue Apron moving the goalposts on whom it recognizes as its target demographic. New CEO Linda Kozlowski said the meal-kit company hadn't updated its total addressable market since its IPO in 2017, which at the time it saw as the entire $1.3 trillion grocery and restaurant market. While such grandiose, eye-bleeding numbers proved completely unattainable in the two years since going public, Blue Apron has narrowed its field of vision, though to people who view the meal-kit operator as a declining business, not a growing one, the goals still seem lofty.

Koslowski said Blue Apron was now focused on some 50 million households, primarily singles and empty nesters who it says are its best customers, but who have also bought some groceries online. That gives it a total addressable market now of $40 billion to $45 billion, though it thinks the serviceable market is closer to $9 billion.

So, don't think of Blue Apron as a company that is still hemorrhaging customers and recording losses. Instead, consider it a business worth $122 million that so far has only reached just 1% of its target market. It's still got a huge, huge runway.

Going back to where it began

What's worrisome is that the meal-kit company is abandoning its outreach efforts through different channels. The Costco test run is not coming back, and Blue Apron is also killing its experiment on Walmart's Jet.com. However, it will still remain partners with Weight Watchers.

Blue Apron will now return to its roots of engaging with customers through its own in-house efforts. It will be upgrading its e-commerce capabilities and open its menu to more choice and new ingredients. The expense, though, will make the second half of the year less profitable than the first.

This seems like a mistake as it was the failure of selling meal-kit subscriptions that led Blue Apron to try these different avenues in the first place. But it seems the company is happy to remain a bit player in a much larger market, which investors will need to decide if that's how they saw their investment going.