Please ensure Javascript is enabled for purposes of website accessibility
Log In Help Join The Motley Fool
Free Article Join Over 1 Million Premium Members And Get More In-Depth Stock Guidance and Research
By Daniel B. Kline – Updated Aug 12, 2019 at 5:56PM

The "big box" retailer's expanded partnership with Levi's seems like a perfect fit.

Target (TGT -0.35%) has built its apparel business around owned and operated brands, as well as partnerships to distribute mass-market, generally lower-end brands. It's a strategy that has the company partnering with Hanesbrands to sell Champion (a deal that's being winded down) rather than carry Nike or UnderArmour.

Essentially, the retailer has offered low-cost, high-value clothing, whether from its own brands or through partners. That's how the chain has worked with Levi Strauss & Co. (LEVI): For about 10 years, Target has sold DENIZEN, a value jeans brand made by Levi Strauss.

That deal made sense, as it allowed Target to offer reasonable-quality jeans from a respectable, albeit not-that-trendy manufacturer at an appealing price. Now, however, Target is expanding its relationship with the jeans maker to sell its Levi's Red Tab label, which includes the company's higher-end, better-known lines. 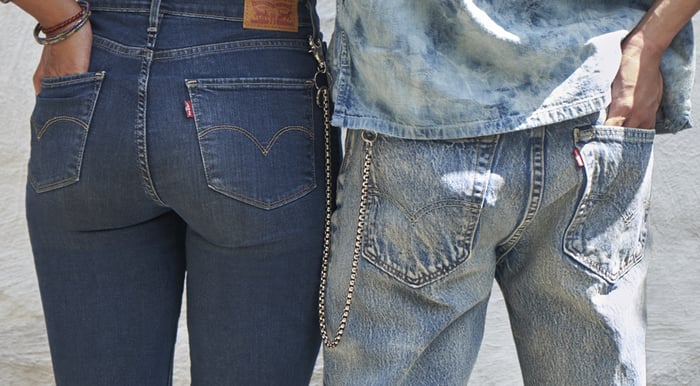 The retail chain has decided to step into a void left by the closure of so many department stores, including most of the Sears chain. Levi's had traditionally viewed Target as a "big box" store, and it has preferred to sell its signature jeans in traditional department stores.

Target, however, has thrived even while traditional department stores have struggled. The retail chain has also improved the look of its stores and has focused more on fashion, including some celebrity partnerships. That has raised the chain's cachet with clothing consumers and likely made it more attractive for Levi's.

The two companies tested part of the men's Red Tab line in 20 stores last spring. That went well, and as of August 11 "Target will offer a curated assortment of men's -- and now women's -- Red Tab products in more than 50 stores across the country near college campuses and highly trafficked urban locations," according to a press release. The offering, which will be available nationally at Target.com, will include jeans, tops, and jackets.

"This partnership is a great example of how Target continues to offer a curated assortment of highly relevant and premier national brands like Levi's, while also differentiating ourselves by offering only at-Target brands that we create just for our guests," explained Target Chief Marketing Officer Mark Tritton in the press release.

While Levi's Red Tab line is a step up for Target, it's still a relatively modest-priced line. Offering it gives the retailer's customers more choice, and lets them buy a brand that does not scream "I got this at Target," which might be important to fashion-conscious shoppers.

This deal seems like a very good fit for both companies. Target gets to look a little bit upscale with a product line that complements what it already sells, while Levi Strauss gets some much-needed retail and digital distribution.