Apple doesn't disclose unit volumes anymore, but it did recently report a fairly modest 2% drop in Europe revenue in the second quarter. The growing services and wearables segments are helping to offset declining iPhone sales across the world, but the iPhone is still the company's most important product. The bad news is that iPhone unit volumes fell an estimated 17% in the second quarter. 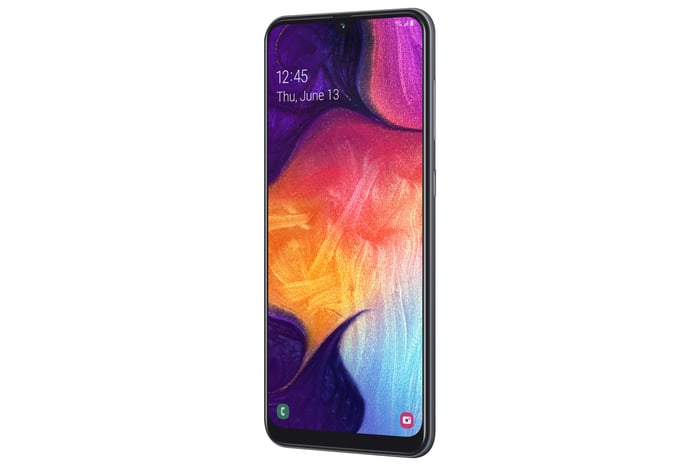 The Samsung Galaxy A50 was the top-selling smartphone in Europe in the second quarter. Image source: Samsung.

Market researcher Canalys today released fresh estimates on the European smartphone market, which show Samsung shipments jumping 20% and retaining their top position in the region thanks to strong sales of the company's midrange A Series of handsets like the Galaxy A50 and Galaxy A40. Apple saw its unit volumes fall by 17%. The Mac maker was the No. 3 vendor during the quarter.

Huawei continues to grapple with the impacts of the U.S. ban, which has ripple effects across the pond due to its reliance on Android. "Samsung has been quick to capitalize on Huawei's US Entity List problems, working behind the scenes to position itself as a stable alternative in conversations with important retailers and operators," Canalys senior analyst Ben Stanton said in the release. The South Korean conglomerate has also shifted back to prioritizing growing market share after years of emphasizing operating profits, Stanton added.

Xiaomi has been able to gain traction with affordable devices like its Redmi Note 7, which shipped an estimated 2 million units during the quarter. "Xiaomi is now a major force in Europe," analyst Mo Jia said. "Its core strength remains price-sensitive countries across Europe, in online and open market channels, but it is increasingly being trusted and ranged by important mobile operators."

Apple's iPhone XR was the No. 5 handset, shipping 1.8 million units. CEO Tim Cook noted last month that Apple Pay is now available across the entire European Union, while the company is still rolling out its ECG app on Apple Watch in the region. While iPhone units may have fallen, Mac revenue in Europe hit a new record for the second quarter.

At 22% of total revenue last quarter, Europe is an important market for Apple. It's the company's second-largest geographical segment behind North America.