Netflix (NASDAQ:NFLX) is really going after the mass market in India. The video streaming giant has launched a budget plan to woo the country's growing population of smartphone users and take advantage of the surging demand for video-on-demand services.

Netflix's mobile-only monthly plan for 199 Indian rupee (INR) (roughly $2.88 per month given the exchange rate at the time of writing) is quite affordable.

Netflix used to cost anywhere from $7.20 to $11.50 every month, but that meant that the platform was able to attract only niche customers in India, as Amazon Prime and Disney's Hotstar had much more affordable plans. 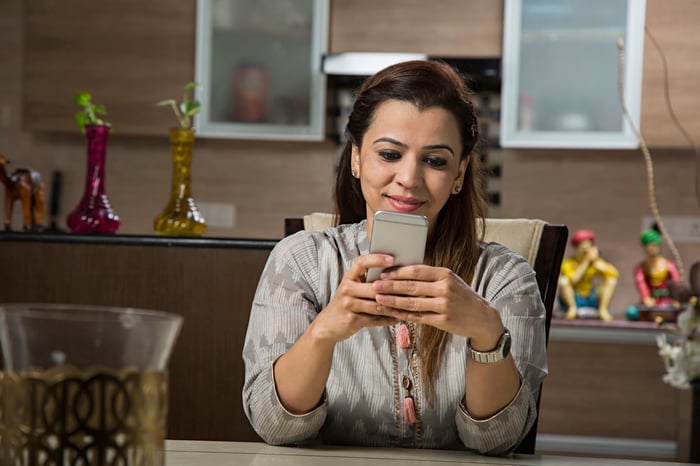 For instance, a monthly Amazon Prime subscription in India costs INR 129 a month (roughly $1.87) and INR 999 a year (or $14.48). The subscription gives users access not only to videos, but also free two-day shipping, music, and exclusive deals. What's more, half of the Indians taking up an Amazon Prime membership do so for the video, according to one estimate.

So Amazon has hit the sweet spot as far as pricing is concerned. More importantly, an Amazon Prime subscription in India will allow you to stream your videos across devices -- and in high definition.

Netflix now has a more price-competitive plan, but if you're opting for the cheapest Netflix plan, you can only stream videos on your tablet or smartphone, and only in standard definition.

Moreover, the mobile-only user will be allowed to stream video to just one screen, and they cannot cast the content onto a bigger television screen. So, Amazon is giving users a richer experience with Prime at a much lower price, particularly if they pay per year.

Similarly, a Hotstar premium membership goes for INR 299 a month ($4.34), while the annual subscription can be bought for INR 999, the same as an Amazon Prime annual subscription. Hotstar can only be streamed on one device at a time, but its huge content library gives it an advantage over Netflix.

So it remains to be seen if Netflix's latest move actually helps it gain access to more subscribers given the benefits the competition delivers. However, there's a chance that Netflix's latest ploy might work, for a couple of reasons.

The biggest reason why Netflix has launched a mobile-only plan is that most of the people in India use smartphones to consume content.

According to an estimate from 2018, Indians spend an average of 1.1 hours a day consuming digital content on their smartphones. India's data usage per smartphone is the highest in the world at 9.8 gigabytes a month.

Given that India's smartphone population is expected to increase from 373 million at present to 442 million in 2022, according to estimates cited by Variety, Netflix seems to have made the right move. Moreover, the company has been betting big on India-centric content, commissioning 22 local-language films along with 12 originals for India.

A combination of relatively affordable smartphone plan pricing and the arrival of new content could prove to be tailwinds for Netflix in India. And Netflix desperately needs this ploy to work, because subscriber growth seems to be drying up in other markets.