Which tech giant is the better value stock?

Technology is no doubt a very hot sector, but it's not without its dangers. Rapid disruption is the name of the game, so it's impressive when a big tech company can stand the test of time. Two such blue chip tech brands are Apple (AAPL 1.37%) and International Business Machines (IBM -0.04%).

While Apple is mostly a consumer company and IBM is an enterprise company, they share similar attributes. Both are very large, with well-entrenched franchises, and each generates ample cash flows, which both companies use to pay investors in the form of dividends and share repurchases.

However, both companies have generated investor skepticism of late, and each displays a price-to-earnings ratio well below the market averages, meaning both stocks could be compelling values. So which is the better bet today? 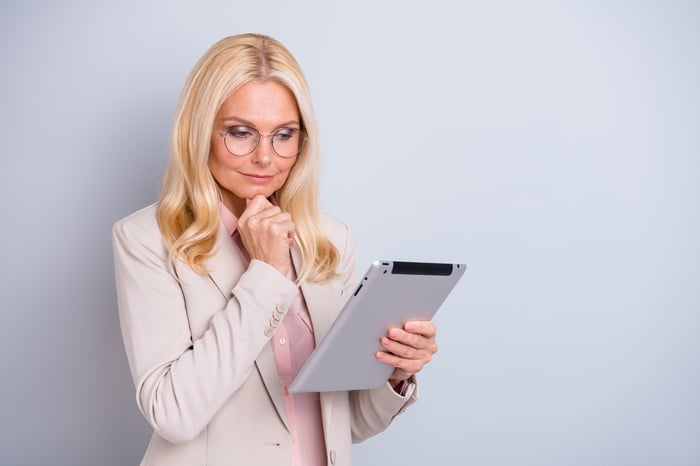 Apple was actually ranked by Forbes magazine as the world's most valuable brand in 2019. That should say a lot right there, but consider this: Despite only garnering 15.8% of global smartphone unit market share in 2018, Apple earned 73% of global smartphone profits. That speaks to Apple's dominance of the premium smartphone market and the intense love consumers have for Apple's brand.

So why does Apple garner a PE ratio of just 17.1, compared with a 21.7 PE ratio for the S&P 500? Mainly, Apple is a victim of its own success. The company's biggest hit, the iPhone, has matured, and people are holding onto their phones for longer periods of time. While the above market share numbers are impressive, both Apple's unit and profit market shares declined from 2017, leading some to believe the company will be hard pressed for growth in the years ahead. Additionally, despite recent progress toward a resolution, the current trade war with China has caused fear for Apple's supply chain, which currently runs through China, and/or a patriotic Chinese ban on iPhones.

However, bulls like me (and a certain Oracle from Omaha), to use an Apple catchphrase, "think different."

After the China swoon of the past few quarters, Apple pivoted to more promotions, trade-in offers, and other sales initiatives, which seems to indicate pricing and economics -- not a widespread boycott -- were the culprits of the slowdown. Apple also continues its strong developer relationships in China and announced a new card partnership with ride-hailing giant Didi Chuxing.

The iPhone issue is also likely overblown. Though units sold have been declining, it's not because people are fleeing to other brands. In fact, the iPhone installed base continues to grow, reaching an all-time high in every single one of Apple's top 20 markets last quarter. That's important, as the iPhone is the platform upon which Apple grows its services segment, which grew 18% in constant currency last quarter and reached 420 million subscriptions, with more services on the way later this year.

And remember, Apple could be poised for a huge iPhone replacement cycle once its 5G phones hit the market, which, according to at least one analyst, should occur in late 2020.

Like Apple, IBM has been pigeonholed as a business in decline, but to an even greater degree. In fact, IBM posted overall revenue declines for 22 straight quarters, until the fourth quarter of 2017, when it eked out a 4% gain. However, IBM once again reverted to revenue declines in the fourth quarter of 2018, when the boost from its Z mainframe cycle wore off. That's a big part of the reason IBM trades at just 10 times next year's earnings estimates.

However, things may be turning around for IBM -- or at least, turning for the better versus investors' rock-bottom expectations.

While IBM once again reported revenue declines last quarter, this is largely due to lapping the mainframe up-cycle last year. The company's important strategic imperatives mostly showed decent mid-single-digit growth, powered by next-gen cloud and cognitive software and services. The cloud portion of all IBM segments grew 5%, with the company's as-a-service recurring revenue up 7%.

IBM should also get a boost from its recent $34 billion acquisition of Red Hat, which just closed. IBM believes that it can greatly increase Red Hat's growth in international markets while also bundling Red Hat's leading open-source software with IBM's hybrid cloud and middleware services.

IBM expects Red Hat to boost its overall revenue growth to the mid-single digits by 2020-2021, with expanding margins leading to high-single-digit operating income growth and robust free cash flow generation. That's not too shabby at all for a stock trading at IBM's bargain-basement valuation.

However, when taking into account Apple's massive cash pile, IBM's debt load, and Apple's enormous share repurchases, their valuations are closer than you might think. When combining dividends with share repurchases, Apple's total shareholder payout yield comes to a whopping 9% over the past 12 months, actually higher than IBM's 8% total shareholder payout. 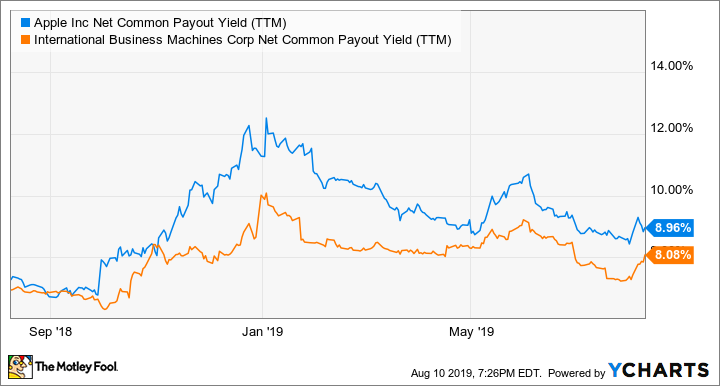 And when factoring in cash and debt, Apple's enterprise value-to-EBITDA ratio falls to just 10.5 times versus IBM's 8.6. That's a lot closer.

Given that perspective, I would lean toward Apple. IBM could become a nice turnaround story, but its future is a bit more uncertain than that of perhaps the best brand in the world. Apple's generous shareholder returns, better balance sheet, and 5G catalyst make it the better buy today.