Please ensure Javascript is enabled for purposes of website accessibility
Log In Help Join The Motley Fool
Free Article Join Over 1 Million Premium Members And Get More In-Depth Stock Guidance and Research
By Luis Sanchez CFA - Aug 13, 2019 at 9:58AM

Is the Pop! toys maker's business success an indication of a fad or the start of a trend?

You may not have heard of Funko (FNKO -5.39%), but there's a good chance you have seen its collectible toys. Funko is the maker of the Pop! toys featuring pop culture icons from TV and movies in cute toy form on small pedestals.

Funko's sales have taken off, and its stock price has swelled since it went public in November 2017. The company's financial momentum shows no near-term signs of exhaustion, but can Funko translate its hit toy into a lasting brand?

Funko's business involves licensing popular intellectual property from TV, movies, video games, and pop culture and translating those cultural icons into cute toys. While the company sells a variety of products including apparel, plush toys, and handbags, its most popular item by far is its Pop! toy series. In 2018, the Pop! brand accounted for 76% of Funko's sales, up from 70% in 2017. 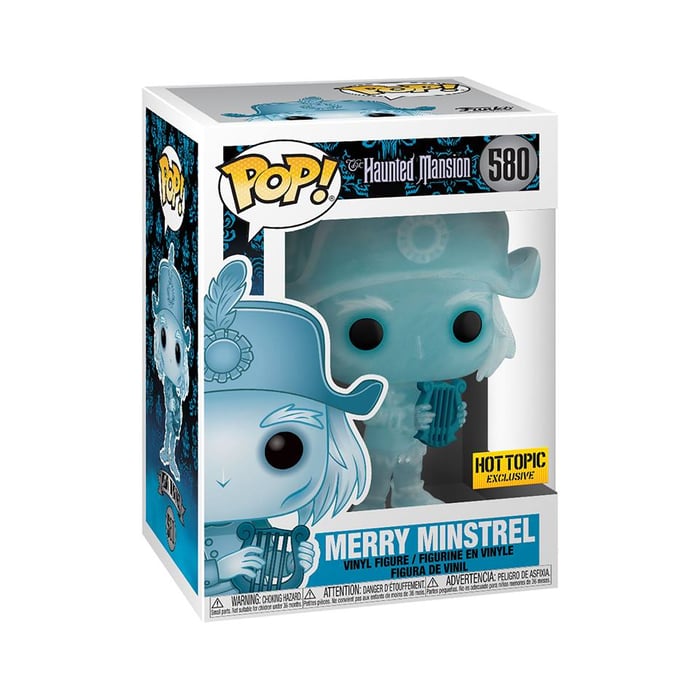 The company's strategy is to create items drawing from a mix of different pop culture categories. It categorizes its items into four buckets: classic evergreen, movie release, current TV, and current video game. For example, a classic evergreen item uses cultural icons that transcend generations, such as Star Wars or Disney characters. Funko also works with content creators to promote the release of new characters, as when it released a limited edition Guardians of the Galaxy 2 series corresponding with the release of the movie.

Because Funko is using characters owned by other companies, it strikes licensing deals and pays royalties of around 16% of sales. Funko has diversified its license base with over 200 content providers covering over 600 active licensed properties. It has struck licensing agreements with many big brand names including Disney, HBO (owned by AT&T), the National Football League, and Activision Blizzard, just to name a few. The licensing deals typically last two to three years and are often renewed.

To sell its products, Funko has partnered with retailers including GameStop, Amazon, Hot Topic, and Walmart in the United States. It also sells with international retailers, but U.S. sales are currently the lion's share of its business. Funko has produced thousands of individual items over the years, and any single store can't stock all of the items. This creates a treasure hunt shopping experience, which drives customers to frequently visit stores in search of rare items. Funko will utilize social media to introduce new items and create customer interest, but the company does limited traditional brand advertising.

Putting the pieces together, Funko has an intriguing product creation model and distribution strategy. Although Funko primarily derives its business from the Pop! collectible toy, it doesn't rely on any single intellectual property owner or retailer.

Strong growth on both top and bottom lines

Funko recently reported its second-quarter 2019 financial numbers, which demonstrated accelerating revenue growth and expanding profit margins -- suggesting that things are just heating up for the toymaker. 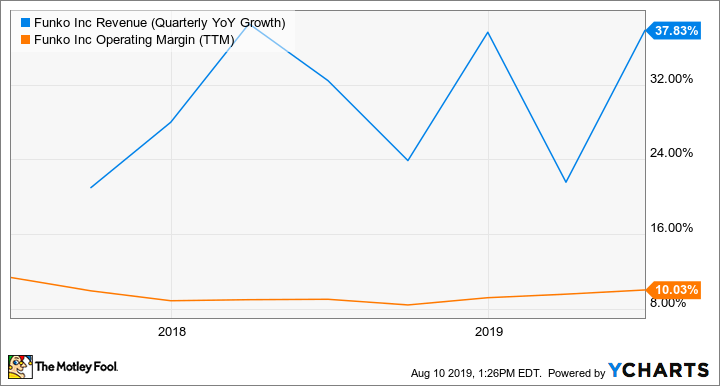 The company's pricing strategy is to keep most items under $10, making it easy for the consumer to make repeat purchases and build a collection. The strong sales growth likely reflects a mix of repeat customers and a growing customer base.

The financial model does call for paying a 16% royalty to content owners, but Funko can achieve greater profitability as it scales up by leveraging its low fixed overhead, which is basically its office headquarters. Surely, there is room to expand the operating margin from its current 10%.

One thing to be slightly concerned about, however, is that Funko manufactures its items using factories in China and Vietnam. On its Q2 2019 earnings call, the company noted that it has moved much of its production out of China in response to the recent U.S. tariffs, but management also cautioned that gross margins in the fourth quarter could be adversely affected by 0.5% if the announced tariffs go into effect. 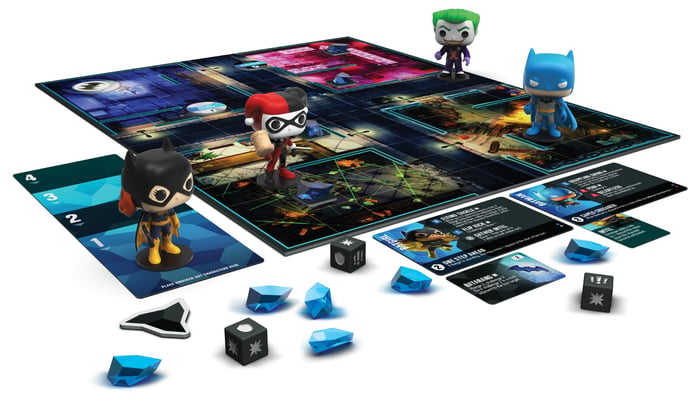 Funko is working to expand its product line and introduced a new series of board games, including one with a Batman theme, at San Diego's Comic-Con in July 2019. Image Source: Funko

The biggest question on investors' minds is whether Funko's business model is merely the short-term beneficiary of a fad product or the makings of a bigger brand in the future. An analogy that detractors make is that Funko is this generation's Beanie Babies, which saw massive popularity 20 years ago but have since fallen into obscurity.

The ultimate test will be if Funko can gain traction in other product categories such as apparel or other types of toys. However, Funko's ability to monetize its brand will be limited by the fact that it doesn't actually own its products' intellectual property.

Of course, Funko's current product line is still showing strong signs of growth. If this trend continues, the company's financial success won't be ignored by the stock market.