Wall Street had a celebration on Tuesday morning after news of a breakthrough in the trade negotiations between the U.S. and China raised hopes that the two countries would be able to resolve their issues and find a more comprehensive solution. As of 11 a.m. EDT, the Dow Jones Industrial Average (DJINDICES:^DJI) was up 439 points to 26,337. The S&P 500 (SNPINDEX:^GSPC) rose 45 points to 2,928, and the Nasdaq Composite (NASDAQINDEX:^IXIC) climbed 156 points to 8,019.

Trade has been a thorn in the side of hundreds of major companies, but a few have far more exposure to China than others. That's a key reason why mobile device giant Apple (NASDAQ:AAPL) and apparel retailer Gap (NYSE:GPS) are standout winners early in Tuesday's trading session. Investors hope that further progress on the trade front will allow the market to focus on their fundamental prospects for future growth.

Apple sees a brighter future ahead

Shares of Apple were up more than 4% as investors celebrated the potential positive impacts of more cordial trade relations between the U.S. and China. In particular, the White House said it would delay the implementation of the latest round of tariffs for several months, including key Apple products like cellphones and laptops. 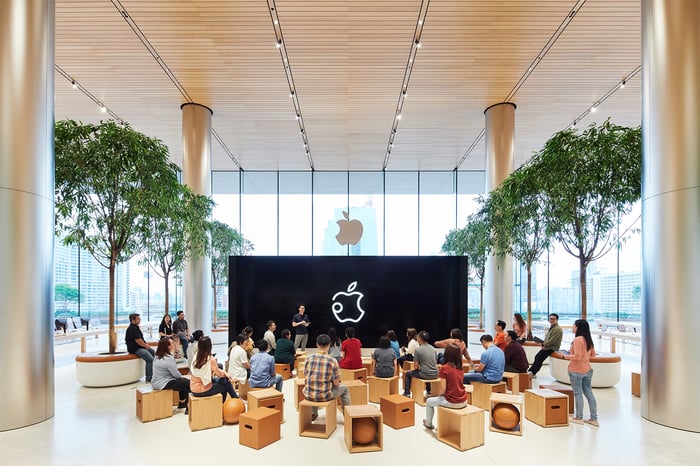 Apple has been nervous about tariffs for a long time. For several months now, CEO Tim Cook and his management team have warned the Trump administration about the potential damage that implementing more tariffs on imports from China would do to key parts of the U.S. economy. One primary argument has been that while the purpose of the tariffs is arguably to return manufacturing and other economic activity to the U.S., tariffs could end up having the opposite effect for companies like Apple that have sophisticated international supply chains.

Avoiding further tariffs won't solve all of Apple's problems. Chinese competition has been an issue for the tech titan in emerging markets, where the iPhone maker has to cater to consumers who can't necessarily afford its highest-end premium products.

Yet investors have high hopes that China will be a growing market for Apple over the long run, and the political fallout among Chinese consumers from the tariffs has been considerable. Apple hopes that if the trade disputes end, it can market its products more effectively and get back some of its growth.

Shares of Gap also did well, rising 5% in response to the tariff news. For apparel manufacturers, significant imports of materials make trade conditions especially important, and the current low-margin retail business environment makes it hard to pass through those tariff costs to consumers.

Gap's stock has been under considerable pressure in recent months as trade tensions ratcheted up. In particular, retaliatory tariffs that China imposed in response to the Trump administration's multiple rounds of import taxes put pressure on Gap's plans to expand throughout the Chinese consumer market.

To be fair, Gap can't blame all its problems on China. Comparable sales for its various retail concepts have fallen lately, with even previously healthy store chains like Old Navy seeing difficulty. Changing consumer tastes and the move among many shoppers toward e-commerce retail channels have presented special challenges for Gap, which has traditionally had a heavy presence in shopping malls.

Yet if Gap's future success relies on international markets, getting trade issues resolved will be a positive for the retailer. That's what shareholders of Gap and many other individual companies are banking on from the latest news on the trade front.