But BP and Royal Dutch Shell (NYSE:RDS.A) (NYSE:RDS.B) do make investments in renewable energy. However, those investments usually don't receive a lot of attention. That's why it's so surprising that BP CEO Bob Dudley put the company's renewable efforts front and center in BP's Q2 earnings call.

Here's what he said and why it's so remarkable. 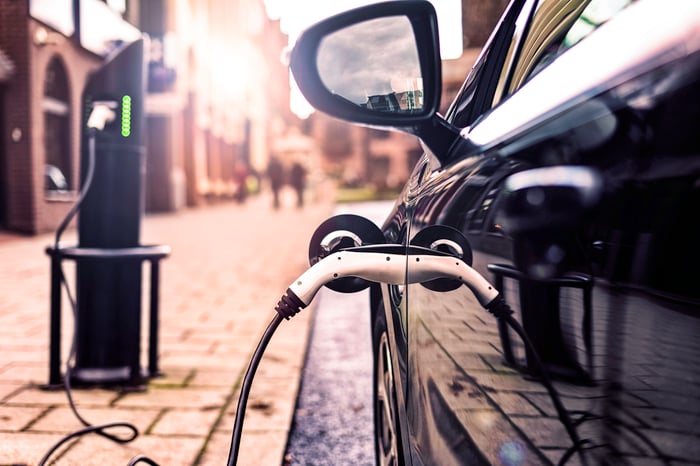 Right at the top of his prepared remarks, Dudley let the analysts know he was going to talk about the company's renewable energy efforts, saying, "I also want to talk about the focus we're giving to the energy transition and our low-carbon agenda."

And talk about them he did. In fact, Dudley spent more time discussing BP's green energy initiatives than he did talking about the entire rest of BP's business. I can't quote the entire thing here without turning this into a 2,000-word monstrosity. If you're interested, though, you can read a full transcript of the remarks here.

But here's one portion of his summary of the company's green initiatives:

We have a lot going on, both in terms of existing renewable energy businesses as well as our investment in new low-carbon activity. ... This year, we will invest more than $500 million of capital, which is more than the total annual capital expenditure for each of the companies in the lower half of the FTSE 100.

Our activity spans a number of renewable energy businesses -- renewable fuels, renewable products, wind energy, solar energy, and biopower, including in biofuels and in biopower through the joint venture with Bunge, ... in wind energy, where we have a leading portfolio in the U.S. onshore sector and, as mentioned, in solar, where our investment in Lightsource BP is growing rapidly with the ambition of reaching 8 gigawatts of installed solar capacity by 2022, enough to power more than 2 million homes.

Beyond our renewable energy businesses, we are also actively developing low-carbon businesses and customer offers across our five focus areas. We are participating in a number of ways through direct equity investments to supporting start-ups or developing our own projects.

Dudley is right: Half a billion dollars of capital in a year toward green projects is nothing to sneeze at. And those investments include a number of major projects like:

On an earnings call, it's unusual for a big oil CEO to talk more about green energy investments than about the company's main oil and gas business. For example, Shell CEO Ben Van Beurden spent about a minute in his most recent earnings call discussing his attendance at the Vatican Climate Summit in June and the company's commitment to preventing climate change. ExxonMobil's management didn't mention it at all in the prepared remarks section of its most recent earnings call. In fact, I can't find a single instance in the past two years' worth of earnings calls in which a Big Oil CEO besides Dudley devoted more than a couple of paragraphs to green initiatives or carbon footprint reduction.

Dudley, though, is different. During two prior earnings calls in the last two years -- Q2 2018 and Q4 2018 -- Dudley spent a few minutes discussing, as he puts it, "the dual energy challenge" of providing more energy with less emissions. But even Dudley has never come close to spending a majority of his speaking time on green energy... until now. This quarter, though, he had good reason to thoroughly discuss his company's green energy efforts.

Why he said it

In May, at BP's annual meeting, shareholders almost unanimously passed a resolution drafted by a group called Climate Action 100+. The group is a coalition of some of the biggest investors in the world, with more than $32 trillion in assets under management. The resolution called on BP to "include in its Strategic Report and/or other corporate reports ... a description of its strategy which the Board considers, in good faith, to be consistent with the ... Paris Agreement." This reporting will need to include a list of capital expenditures, metrics and targets, progress toward goals, and methodology.

BP's board supported the resolution, perhaps in part because a competing resolution that would have imposed hard emissions caps was also on the table. That second resolution -- which would have attempted to force BP to impose hard caps on its customers' emissions as well -- failed with just 8% of the vote. Still, many shareholders were disappointed that the company wasn't taking as aggressive an approach as Shell, which has announced target reductions in its net carbon footprint, with a goal of essentially cutting its carbon footprint in half by 2050.

So BP's management is clearly anxious to pacify climate-conscious investors, which explains Dudley's focus on climate issues in his first earnings call since the vote. Meanwhile, Exxon isn't facing the same sort of pressure. Its shareholders voted down comparatively modest measures proposing a special board committee on climate change and a report on the risks of climate change to Exxon's U.S. Gulf Coast chemical plants.

The good news for investors is that it appears BP management is taking their overwhelming desire for greater climate consciousness seriously. Long-term, this should also benefit investors as renewable energy accounts for a greater and greater share of global energy consumption. By making strategic investments now, BP will be better poised to navigate a changing energy landscape.

Dudley himself claims this is good for the company, saying: "As well as being in the world's best interests, we believe it is in the best interests of BP and all its stakeholders. It means less uncertainty in planning our business and greater clarity about how we can help meet society's needs for more energy with lower greenhouse gas emissions with good returns for our shareholders."

From a cynical viewpoint, greater emphasis on these modest efforts by BP now may help to stave off a potentially more draconian shareholder proposal that would impose strict caps or strategies that would have a negative impact on the bottom line.

All in all, while the amount of time Dudley spent talking about green initiatives during the earnings call may initially seem surprising, it makes sense given recent events, and investors should welcome it.