Shares of three well-known clothing retailers -- Ralph Lauren (NYSE:RL), Urban Outfitters (NASDAQ:URBN), and Gap (NYSE:GPS) -- all jumped at least 5% higher Tuesday morning after it was revealed that the U.S. would put off 10% China tariffs on certain products.

For investors of many consumer goods companies, delaying China tariffs until Dec. 15 is welcome news. By postponing tariffs on popular items such as phones, computers, and clothing, among many others, companies will be given a window to avoid tariffs during such important times as back-to-school and holiday shopping, and that's huge. The delay also buys time for the U.S. and China to de-escalate trade tensions -- a call between the two nations is scheduled in two weeks. 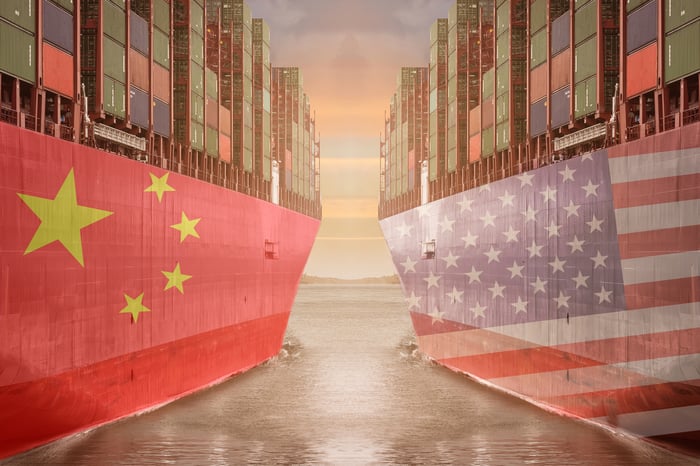 Investors might be tired of hearing about trade tensions, but that doesn't make these developments any less important. Consider that the International Monetary Fund noted trade tensions as one of the most serious risks to global economic growth when it downgraded its full-year forecast, and Goldman Sachs warned that a trade war could trigger a U.S. recession.

The announcement regarding delayed tariffs is a positive step for both countries and investors. However, when it comes to investors and what they can control, trade tensions and tariffs are largely out of our hands and serve as good reminders that the most important factor when investing should be a company's core business and bull thesis. Trade tensions will send many stocks higher or lower in the short term, but if you believe in the core company you're invested in, you can take those swings in price with a grain of salt and buckle up for the long term.