Clean Energy Fuels (NASDAQ:CLNE) reported second-quarter results on Aug. 8, delivering solid double-digit growth in fuel deliveries and strong cash flows. Fuel volume increased 11% from last year, and nearly 5% higher than the first quarter; operating cash flows were $17 million, helping the company end the first half of the year with a stronger balance sheet than it started with.

Mr. Market didn't respond happily to the company's results, however. The share price fell more than 10% the first day after earnings and are down nearly 25% since as of this writing, joining many other energy-related stocks that have taken a pummeling over the past week on global trade and recession fears. 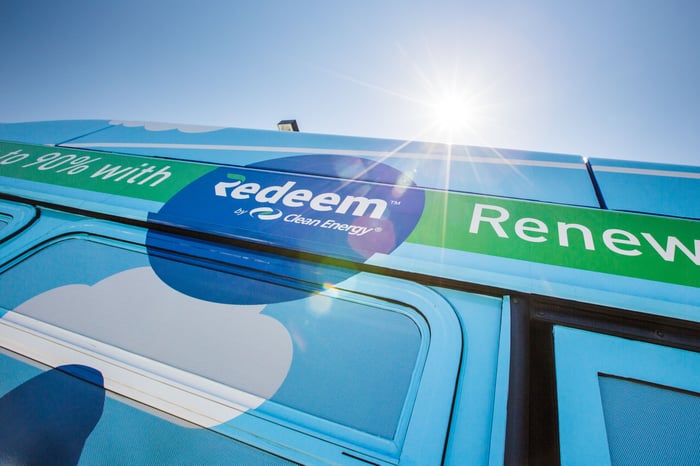 Let's take a closer look at Clean Energy's financial and operating results. Despite the market's reaction, the company's operating results and growth offer more than just a glimmer of optimism.

A look at some key metrics from the quarter

From the second quarter:

On the surface, none of those metrics, with the exception of fuel volume growth, looks very good. Revenue was up a very small amount, and the company continues to generate a loss going by generally accepted accounting principles.

Let's add a little context to these results, starting with revenue. Clean Energy sells natural gas, and fluctuations in commodity prices have an impact on the company's revenue result that don't translate to its cash flows. For instance, natural gas prices were 14% lower in the second quarter than in the year-ago period. But as CFO Bob Vreeland pointed out on the second-quarter earnings call, the company sees lower costs when natural gas prices fall. That's why volume increased 11% but revenue was up just under 3%.

As for the continued losses, there's additional context related to big depreciation expenses the company takes each quarter. Last quarter, Clean Energy took $12.6 million in depreciation and amortization expense, related to a three-year period when it spent hundreds of millions in capital to aggressively build a public refueling network. The good news is this expense is non-cash, and management has been adamant that the assets it is depreciating will far outlive their depreciation schedule, while also supporting substantial growth in fuel volume sales with minimal additional spending necessary.

That leads us to cash flows: Though still solidly positive, operating cash flows fell significantly from last year. The biggest reason for the decline was timing related to some cash expenses, and not a deterioration in its operating results.

Key takeaways from the earnings call

The company's recent seven-year deal with UPS (NYSE:UPS) for 170 million gallons of Redeem highlights the growing demand for the fuel, which it says is far cleaner than diesel or gasoline, while being superior to electric vehicles since it's available today, while few EV options for medium- and heavy-duty transit even exist, and it's far cheaper than the ones commercially available.

Management also says profitability remains strong. Gross margin per gallon was $0.246 per gallon, down from $0.257 per gallon in the first quarter and $0.265 per gallon last year. However, last year's result included $1.4 million in federal alternative fuel tax credits, which have since expired, and the recent result remains still within management's guidance, if at the low end. Says CFO Bob Vreeland, from the earnings call:

Based on its results in the quarter, as well as ongoing conversations with trucking, solid waste, and other transportation fleets, the company expects to continue seeing strong uptake of Redeem renewable natural gas, and a steady, if slow, shift away from diesel to natural gas in the trucking sector.

Looking at the full year, management is now anticipating it will see a small increase in capital expenditures and debt in the second half of the year, directly tied to contracted volume growth related to its "Zero-Now" heavy trucking program and expansion at its NG Advantage "virtual pipeline" subsidiary.

The company doesn't offer specific guidance on volume or other financial results, but it's certainly in a much stronger financial and operating position than it's been in for a number of years, even if Mr. Market's treatment of its stock doesn't make it seem like it.