Please ensure Javascript is enabled for purposes of website accessibility
Log In Help Join The Motley Fool
Free Article Join Over 1 Million Premium Members And Get More In-Depth Stock Guidance and Research
By Daniel Miller - Aug 14, 2019 at 9:19AM

Carvana's second quarter was impressive in many ways, but here's what drove the excellent quarter and what investors should watch down the road.

Carvana (CVNA 2.10%) is no stranger to blockbuster financial results and high-flying top-line growth during many of its quarterly reports. And investors who were savvy enough to scoop up shares during its April 2017 IPO have witnessed the company's near 600% stock price increase over its time as a publicly traded company. The stock price's most recent pop came from another strong second-quarter result that included a significant milestone for the company and its investors.

Let's dig in to what drove Carvana's blockbuster second quarter.

No matter how you break it down, Carvana's growth figures during the second quarter were nothing short of impressive. In fact, the second quarter marked the 22nd straight quarter of triple-digit revenue growth as revenue checked in with a 108% increase to just over $986 million, topping analysts' estimates that called for $921 million. Retail units jumped 95% to 44,000 units, and adjusted net loss per share was $0.40, a better result than analysts' estimates of a $0.43 loss per share. 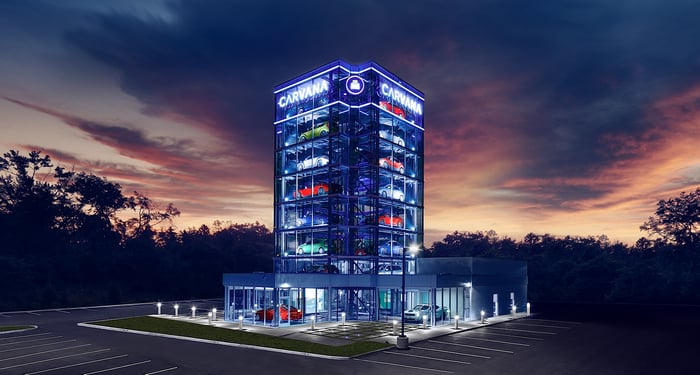 Carvana's top- and bottom-line results beat estimates, but what really drove the stock price and investor excitement higher was gross profit per unit (GPU). Total GPU, excluding stock gifts, jumped a massive $1,002 up to $3,175 during the second quarter, compared to the prior year. That is a massive improvement, and it also crossed management's mid-term target set at $3,000 GPU. Carvana's $3,175 GPU will be difficult to sustain during the back half of 2019, but the results should easily top the first quarter's $2,429 GPU. Management expects full-year 2019 GPU in the range of $2,650 to $2,850, well above 2018's $2,133 GPU -- a fantastic improvement.

If you're wondering what drove the surge in GPU, it wasn't one specific development. Carvana recorded a significant jump in retail GPU, wholesale GPU, and other GPU thanks to a reduction in average days to sale, from 66 down to 61 days, incremental shipping revenue, an increase in the number of customer-sourced vehicles, and improved loan monetization. The second-quarter's impressive GPU is just the latest improvement in the metric over the past five years of consistent growth. 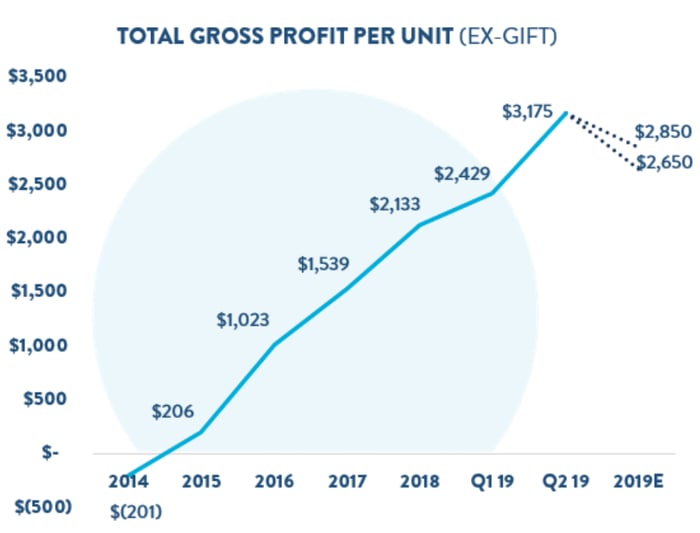 What will drive Carvana's future?

The good news is, Carvana is doing extremely well in expanding its retail and reach. In fact, Carvana's 44,000 retail units during the second quarter almost matched the 44,252 total retail units during all of 2017. Further, Carvana continues to add markets served, which has driven its total U.S. population coverage from 19.7% during 2016 to 67% by the end of 2019. 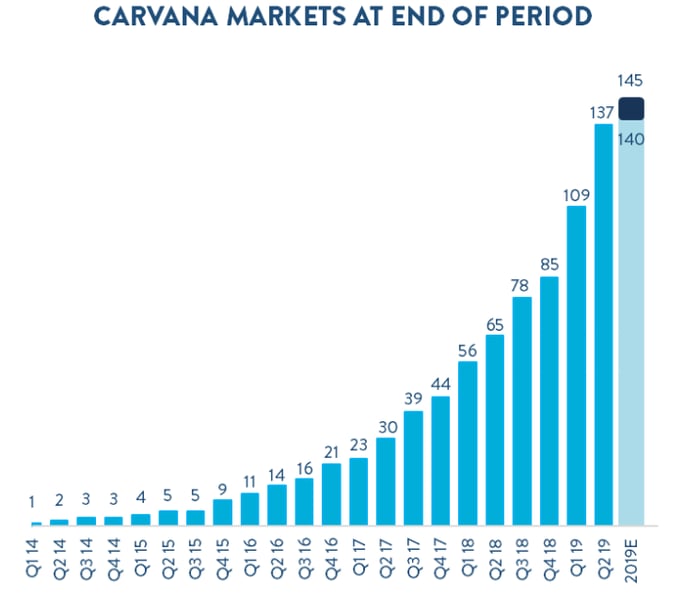 Carvana turned in an impressive second quarter highlighted with growth in a slew of important metrics. The company isn't slowing down and continues to improve GPU while also expanding its reach and improving its market penetration. One day, Carvana's hardly believable stretch of quarters with triple-digit revenue growth will come to an end, but if management keeps improving its business the way it has, that day could also bring investors much closer to profitability. Unless Carvana hits a speed bump on its road to growth, don't be surprised if it continues to release blockbuster quarterly results.

Why Carvana Stock Lost 21% in March

2 Cheap Stocks That Are Doubling Revenues