But going against the grain could help Snap Spectacles 3 establish a toehold in the smartglasses market.

Three years ago Snap (SNAP -3.63%) launched Spectacles, a pair of augmented reality (AR) glasses that sent photos and videos straight to its Snapchat. The device initially generated lots of interest thanks to a clever marketing campaign with vanishing vending machines, but the hype quickly faded.

Snap took a $40 million writedown on unsold Spectacles in 2017, and it seemed like the device was dead. But last year Snap launched a second version that was lighter, didn't have a bright yellow ring around the camera, and came in more colors, with the added option of mirrored lenses.

However, Snap subsequently lowered the production run to about 35,000 units, and Spectacles chief Mark Randall resigned. Once again, Snap's Spectacles seemed destined to be phased out. But last November, reports surfaced that Snap was developing a third version of Spectacles. 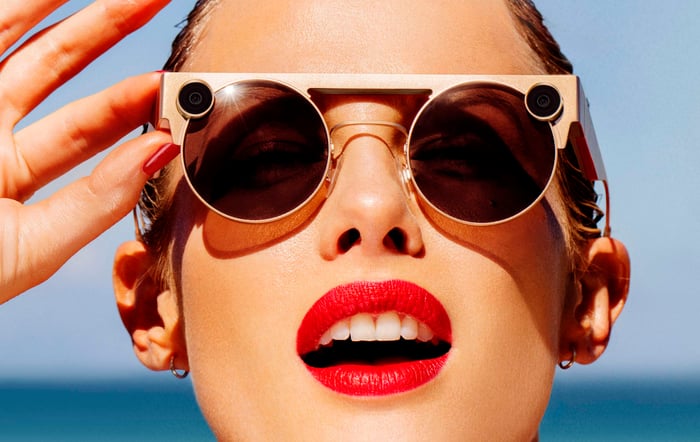 Snap recently confirmed those rumors and introduced Spectacles 3, which will use dual cameras for 3D photos and augmented reality effects. The device will come in two colors and cost $380 when it launches in late October.

For comparison, the first Spectacles cost $130, and the second version cost $150. Does Snap's strategy of selling pricier Spectacles make sense, especially when the first two iterations failed to move the needle?

Will the third time be the charm?

The third version of Spectacles won't require a massive investment from Snap. Its initial run will only be in the "low tens of thousands," according to The Information's Alex Heath, indicating that it doesn't expect the device to be a mainstream hit.

For comparison, Snap claimed that sales of the first version of Spectacles hit 150,000 sales in its first year, but The Information subsequently claimed that "hundreds of thousands" of Spectacles were still in its warehouses. Snap's failure to clear out those inventories resulted in its big writedown in 2017.

Producing a limited quantity of Spectacles 3 is a smart move -- it keeps production costs low while generating plenty of buzz in the media. Snap can always produce more Spectacles if it runs out, and that scarcity might boost demand. 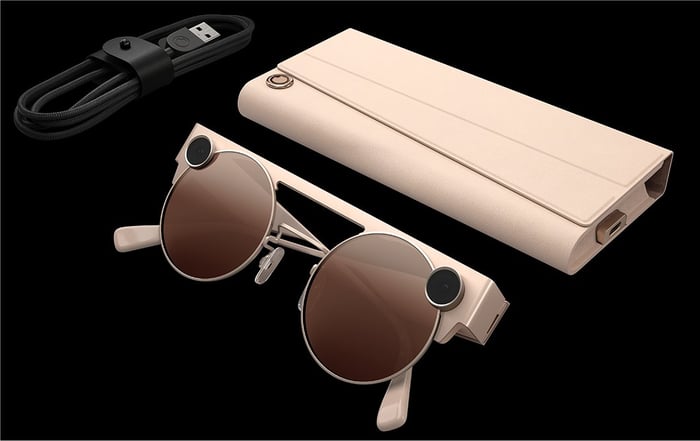 It's an extension of its augmented reality ecosystem

Snap likely believes that its new AR features in Snapchat, which include games and animated lenses, could boost demand for the new Spectacles, which showcases those features with its dual cameras.

During last quarter's conference call, CEO Evan Spiegel stated that AR was "a daily behavior for the vast majority of our community because Snapchat opens into the camera." Spiegel also stated that Snap's strategy was to "continue driving innovation in fundamental AR technology while building a platform for creators and partners to power augmented reality experiences for our community."

Spiegel stated that over 200 million people -- which matched its daily active user (DAU) count of 203 million -- were playing with Snapchat's new AR lenses within the first two weeks. Snap clearly hopes to capitalize on that interest to sell more Spectacles, which could give it a foothold in the hardware market and diversify its core business away from ads.

But it will probably remain a niche device

Several companies have tried to crack the market for AR glasses before, but none have succeeded. Alphabet's (GOOG -1.98%) (GOOGL -1.82%) Google Glass was once hailed as a game-changer, but privacy concerns and the device's awkward appearance doomed its initial run. Google is marketing the second version of Glass as an enterprise device, but it's only attracted a handful of partners.

Apple recently scrapped its plans for an AR/VR headset, although it might still be developing a pair of slimmer smartglasses, and Microsoft's HoloLens remains aimed at developers. Intel was previously developing "socially acceptable" AR glasses, but eventually abandoned the device and exited the wearables market.

Snap likely believes that there's an untapped niche of Snapchat users who will buy a pricey pair of AR-powered Spectacles. If it's wrong, it won't incur another big writedown because its initial run will be limited. But if it's right, that toehold might become a foothold in the nascent market of stylish smart glasses. If that happens, it could help Snap straddle the software and hardware markets and widen its moat against Facebook's Instagram.