Concerns about new tariffs on Chinese goods went on the back burner on Tuesday, but the market found another reason to worry today. Yields on 10-year Treasury bonds fell below two-year maturities, a development generally considered a signal of a coming recession. The Dow Jones Industrial Average (DJINDICES:^DJI) and the S&P 500 (SNPINDEX:^GSPC) plunged 3%.

As for individual stocks, a big earnings miss by Macy's (NYSE:M) sent shockwaves through the retail industry, and Tilray's (NASDAQ:TLRY) quarterly report triggered a swoon in marijuana names. 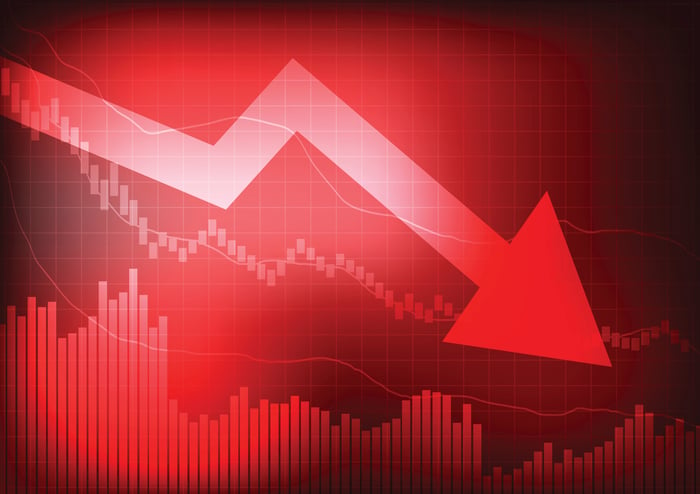 Macy's shocked investors with a huge decline in profit and the market wasn't buying management's attempt to reassure analysts about its readiness for the fall season, sending shares down 13.2%. Net sales dropped 0.5% to $5.55 billion, in line with expectations, but a 47% plunge in earnings per share to $0.28 was well below the analyst consensus estimate of $0.45.

Comparable sales grew 0.3%, but weak demand and a high inventory position forced Macy's to mark down merchandise and take lower profit margins. The company blamed a "fashion miss" on women's sportswear, slow selling of warm-weather apparel, and declining international tourism for the rising inventory levels. Gross margin fell 1.6 percentage points, with a full point of that coming from markdowns.

Company officials on the conference call tried to make the case that inventory levels are better now and that consumer spending is healthy, maintaining sales guidance for the full year. But analysts were concerned about sales if consumer spending softens, and about the potential impact of new tariffs at a time when price increases would not be accepted by shoppers.

Canadian marijuana producer Tilray reported second-quarter revenue that beat expectations, but also a big loss, and shares fell 15.2%. Revenue was $45.9 million, compared with $23 million last quarter and the $41.1 million analysts were expecting. The company's adjusted losses amounted to $31.2 million, or $0.32 per share, compared with the analyst consensus forecast of a $0.25-per-share loss.

Tilray's big increase in revenue was due in part from sales of adult-use marijuana that nearly doubled from last quarter to $15 million and $19.9 million in new revenue from food products thanks to the acquisition of natural foods company Manitoba Products. Average net selling price excluding excise taxes fell from $5.28 per gram in Q1 to $3.92 this quarter, mainly because higher-priced extract products formed a smaller percentage of sales.

CEO Brendan Kennedy said on the conference call that supply constraints have eased in the last three months, but that there is a "severe distribution constraint" in Canada with new stores opening more slowly than expected.