Individual retirement accounts (IRAs) are an excellent tool for investors to grow their retirement savings. You can watch your stocks compound in value over time and not have to worry about paying taxes on dividends or capital gains until you take withdrawals from the account. With a Roth IRA, you often don't have to worry about tax consequences at all.

While some investors like to fill their IRA with dividend stocks to take advantage of the tax savings on income, an IRA is just as useful for growth stocks, giving you years of holding a compounding machine.

Whether you're looking for growth or income -- or perhaps both -- you might want to consider Berkshire Hathaway (NYSE:BRK.A) (NYSE:BRK.B), Take-Two Interactive (NASDAQ:TTWO), and Charles Schwab (NYSE:SCHW). 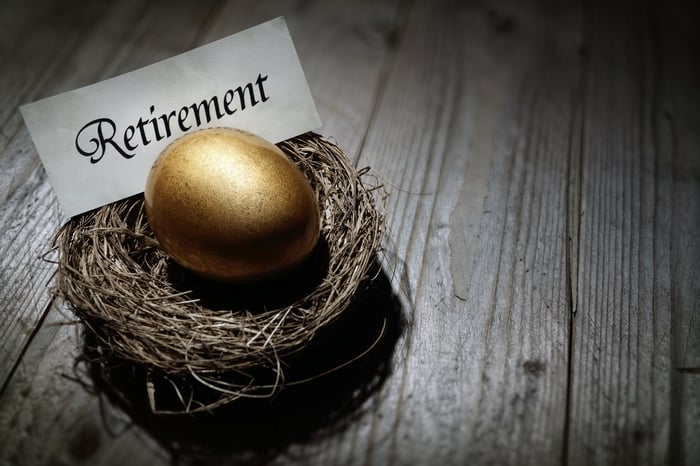 Long-term investing at its finest

When thinking of an anchor holding for your IRA, I can't think of a better stock than Berkshire Hathaway. It's a large business, so you're not going to hit a home run, but Berkshire checks off everything you ideally want in a core holding: It owns a diversified group of businesses that provide essential services and products, and you get Warren Buffett and a roster of talented business managers as your stewards.

It also owns $200 billion worth of stocks, including large stakes in American Express, Apple, Coca-Cola, and Wells Fargo. Apple was just added in the last few years, but some of these stocks Berkshire has owned for more than 20 years.

Last year, all of Berkshire's operating businesses and investment income brought in $37.4 billion in cash from operating activities, and it currently has over $100 billion in cash on the balance sheet waiting for the legendary investor to put to work. That's plenty of ammunition the Oracle of Omaha can use to go elephant hunting if the markets pull back.

Invest where the next generation is spending time

The video game industry is growing faster than traditional media, and is a ripe field to go looking for stocks that can juice your returns over the next decade and beyond. The industry is expected to grow at 9% per year thanks to more people playing games, growth in mobile game revenue, and emerging new ways to play like cloud subscription services.

Take-Two is not the most diversified game maker, but it's been outperforming its larger peers like Activision Blizzard and Electronic Arts lately, and I believe that is likely to continue. One reason it may outperform is that Take-Two is only half the size of Activision and EA revenue-wise, so it has the advantage of growing off a small base. If Take-Two were to release a new franchise that turned into a monster hit, it could have a more significant impact on the company's bottom line than at its peers.

Take-Two's Rockstar game studio has gained the reputation of being one of the best game makers in the industry. Grand Theft Auto (GTA), the company's flagship franchise, is one of the best-selling series of all time. GTA V has sold 110 million copies since its release in 2013, and Rockstar's latest release, Red Dead Redemption 2, has already sold 25 million copies following its launch in October 2018.

This year is projected to be a down year for the company in terms of sales growth, but management is currently investing in several initiatives, including esports and a deep pipeline of games.

The stock has already tripled over the last three years, but with trailing-12-month revenue of just $2.8 billion, there is plenty of room to grow in an industry that could reach $300 billion in the next decade.

The brokerage industry has been ripe for disruption in recent years, as several upstarts attempt to undercut the traditional full-service firms like Charles Schwab with zero-commission trades. But Schwab has continued to attract billions in client assets every year. Since 2010, client assets have climbed from $1.57 trillion to $3.7 trillion. Even more important is that 53% of Schwab's new account adds are coming from millennials -- the most tech-savvy bunch of all. What is the company's secret sauce?

Schwab basically touts one advantage: It puts the customer first. The firm has also made great use of technology to make its website easy to use and has successfully built a sticky offering with its Schwab One account service. The combination of award-winning customer service, transparency, and a robust set of investment offerings has been enough for Schwab to take market share away from the big Wall Street firms, such as Merrill Lynch and Morgan Stanley.

The stock has drifted lower this year based on the concerns that lower interest rates might make it more difficult for Schwab to grow revenue. Interest rate cycles come and go, but the constant that determines Schwab's long-term value to investors is growth in client assets, and there's a tremendous amount of assets the company can still bring in.

More client assets mean more ways for Schwab to make money from interest income, commissions, and other fees. The company has less than a 10% share of the estimated $45 trillion in total investable wealth, which provides a long runway of growth. The stock has a forward P/E of 13.9 and currently sports a dividend yield of 1.84%.