J.C. Penney's second-quarter earnings report was far from perfect, but an improvement in adjusted EBITDA should give management some breathing room to implement a turnaround strategy.

After posting flattish comparable-store sales in the first half of fiscal 2018, comp sales began to decline sharply at J.C. Penney (JCPN.Q) in the second half of last year. On Thursday morning, the struggling department store icon reported that this downward trend continued in the second quarter of fiscal 2019.

However, this time, the big sales decline was accompanied by a substantial improvement in J.C. Penney's profitability. While management clearly has a tough task ahead of it, the company's margin expansion last quarter at least provided a ray of hope for investors.

J.C. Penney's comparable-store sales plunged 9% year over year last quarter, which was one of its worst results since the disastrous Ron Johnson era. About 3 percentage points of the Q2 comp sales decline came from J.C. Penney exiting the appliance business and discontinuing its in-store furniture departments earlier this year. On average, analysts had expected a more moderate 5.3% comp sales decline.

The good news for investors was that profitability improved significantly. Since soon after new CEO Jill Soltau took the reins last fall, management has been highlighting opportunities to boost gross margin by improving inventory management and reducing "shrink," the industry term for lost and stolen merchandise. J.C. Penney's efforts in this regard are finally starting to pay off.

Gross margin increased by more than 3 percentage points last quarter, reaching 36.8%, up from 33.7% a year earlier. This, along with the big jump in credit income, more than offset the impact of lower total sales, enabling J.C. Penney to post slightly positive operating income in Q2.

Consequently, J.C. Penney's adjusted net loss improved to $0.18 per share from $0.38 per share in the prior-year period. This easily beat the analyst consensus for a loss of $0.31 per share. Adjusted earnings before interest, taxes, depreciation, and amortization (EBITDA) jumped to $160 million, compared to $105 million in Q2 2018. For comparison, adjusted EBITDA had fallen by more than half in the first quarter.

In conjunction with the Q2 earnings report, management also provided full guidance for fiscal 2019 for the first time. (Previously, it had only said that free cash flow would be positive for the year.) First, J.C. Penney expects comp sales to fell 7% to 8% year over year, with 2 percentage points of the drop driven by exiting the appliance and in-store furniture businesses. This implies sales trends consistent with the first half of the year over the next two quarters, despite easier comparisons. 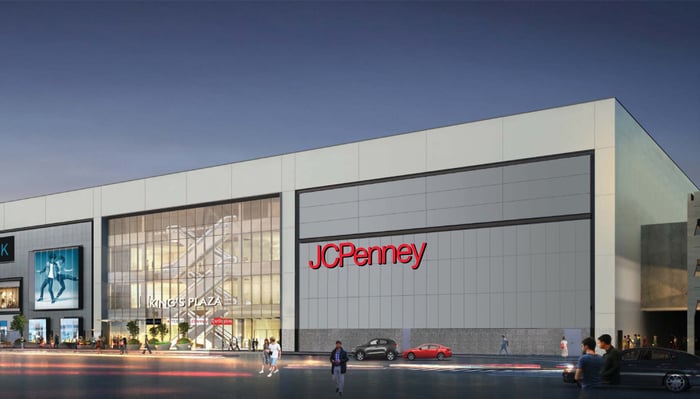 Second, J.C. Penney expects gross margin to improve by 1.5 to 2 percentage points. That would be a solid result, but it does mean that gross margin expansion will slow compared to the results achieved last quarter.

Third, full-year adjusted EBITDA is on track to come in between $440 million and $475 million, down from $568 million in fiscal 2018. This is perhaps the most disappointing aspect of the guidance.

That said, CFO Bill Wafford noted that it's not an apples-to-apples comparison. Factors such as 2018 leasehold buyouts and new accounting rules are responsible for the vast majority of the expected EBITDA decline. Additionally, management does not expect the recent surge in credit income to continue in the second half of fiscal 2019. Thus, the guidance is consistent with modest sequential improvement in the underlying retail business during the back half of the year.

New initiatives are coming -- will they be enough?

Last quarter, J.C. Penney took an important step toward stabilizing its business by delivering a significant improvement in gross margin. Yet it's also pretty clear that without an eventual return to sales growth, there's no path to sustainable profitability.

Soltau and her leadership team understand this, and J.C. Penney is testing various initiatives to boost the top line. On Thursday, it announced a partnership with thredUP to sell secondhand women's apparel and handbags in dedicated 500- to 1,000-square-foot shops in 30 stores.

During the earnings call, Soltau also a described a promising pilot initiative to upgrade fitting rooms in the women's apparel department, including the addition of a dedicated stylist who can provide personalized advice to customers. She said that this is just one of several initiatives being tested right now.

Notwithstanding management's optimism, it's too early for investors to be confident that these moves will ultimately revive J.C. Penney. But at least the company now has a fighting chance to survive, thanks to its better-than-feared second-quarter results.