Analyzing its prospects from a long-term perspective.

The old investment conundrum raises its head again: What do you do with a cheap-looking cyclical stock when you know it faces more near-term challenges and a possibility of more negative news? That's the question facing investors in Caterpillar (CAT 1.95%).

Let's start with what will attract a lot of value investors into the stock. As you can see in the chart below, Caterpillar's valuation is at levels comparable to those seen before previous slumps in its revenue -- the periods of 2009, 2013, and late 2015. Enterprise value (EV) is market cap plus net debt, and EBITDA is earnings before interest, tax, depreciation, and amortization. 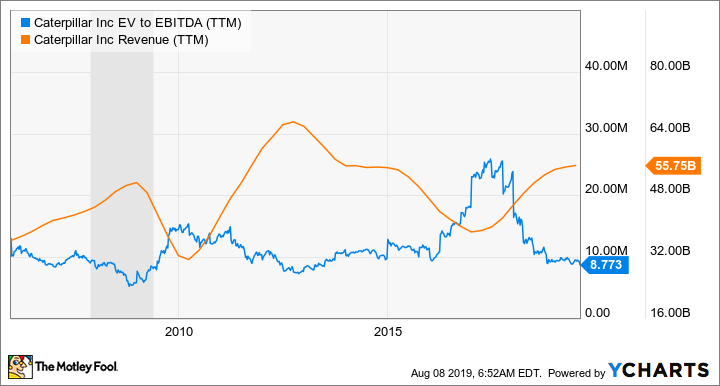 First, there's no guarantee that Caterpillar will experience a drop in near- to mid-term revenue -- and anyway, its long-term trend indicates growth. In fact, sales are expected to grow in 2019, and analysts only have a slight decline penciled in for 2020.

Second, even with no long-term growth -- or, say, low-single-digit earnings growth (tracking inflation) -- Caterpillar is a good value. After all, the stock currently trades at a P/E just 11, and a price-to-free-cash-flow multiple of just over 15 times. To put this into perspective, the free cash flow figure means Caterpillar is generating 6.6% of its market cap in free cash flow and could theoretically pay that as a dividend yield. Indeed, the stock's dividend yield is enticing enough at 3.25%.

All told, Caterpillar's valuation is compelling, and value investors would argue that it limits the downside of any minor disappointment in earnings expectations. The bullish case sees Caterpillar's current valuation as a good entry point for investors willing to ride out negative news in the coming year.

What about the downside?

The other side of the argument points out that Caterpillar's earnings guidance is under threat, as are the assumptions made over its growth potential in the medium term. Moreover, given the undeniable cyclicality of Caterpillar's revenue, the company's earnings and cash flow could collapse in the coming years -- meaning that the current price is actually expensive in terms of forward earnings.

The following chart shows the downtrend in Caterpillar's retail sales growth. And even though growth in the resource industries has been strong in 2019 -- management believes it's at the start of a multiyear upward cycle in mining-equipment capital spending -- it hasn't been enough to offset slowing growth in the construction industries and energy & transportation. 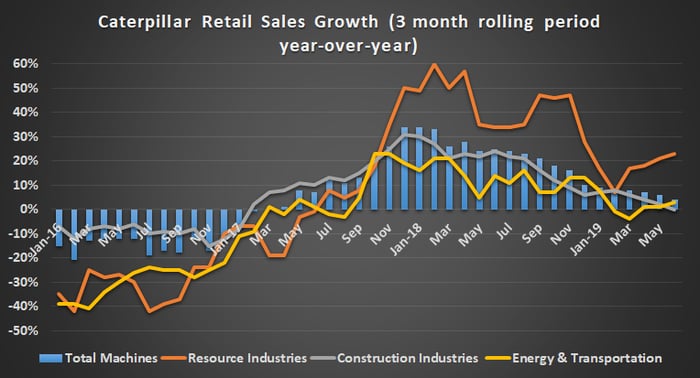 Moreover, there were some warning signs in the recent earnings report. The table below shows that the increase in profits for the resource and construction segments (more on that later) barely offset the decline in energy & transportation.

In fact, management lowered full-year expectations by telling investors to expect profit per share to come in at the low end of its (unchanged) guidance range of $12.06 to $13.06.

Digging into the details and the outlook, the construction industries sales growth of 5% was buoyed by "favorable impact of changes in dealer inventories" in the quarter in North America, but CFO Andrew Bonfield now believes, "Based on current inventory levels, we now expect that dealer inventories will increase for the full year by about $900 million, driven by construction industries and resource industries."

Clearly, that growth in inventory is not sustainable over the long term, and there's likely to be a correction in demand from North America. That's a concern because, within construction industries, North America sales rose $774 million in the quarter, but Latin America was flat; Europe, Africa, and the Middle East fell $63 million; and Asia/Pacific dropped $402 million partly due to very competitive pricing from local companies in China -- a warning sign identified in the previous quarter.

Management continues to expect a bounce in demand as takeaway capacity comes on line in the Permian Basin. Previously, Bonfield had indicated it would be a second-half story, but now it's been moved to an expectation for a pickup in growth in the fourth quarter.

However, management at process automation company Emerson Electric (EMR 2.08%) recently noted that its oil and gas end market didn't perform as expected in the last quarter, with its customers in the Permian Basin holding back investment.

There are also question marks around transportation sales (railroad locomotives), with the wide-scale adoption of precision scheduled railroading among Class I railroads seen as leading to productivity increases that will reduce demand for locomotives and rail cars over the long term.

What to do with Caterpillar stock?

As tempting as the stock is from a valuation perspective, some of the concerns over its earnings growth are actually longer-term in nature, and some of them (locomotives, competition in China) look stock-specific. All of which means that there are probably other ways to look for oversold cyclical stocks to buy in anticipation of a recovery in growth.