With talent and resources going into Teams, it's probably time to re-evaluate Skype's future.

Many of us were skeptical Microsoft would get what it wanted from the deal. As Fool analyst Rick Munarriz wrote when analyzing the purchase:

Mr. Softy already has plans for Skype. It will support Xbox gaming, allowing Xbox LIVE gamers to chat more effectively along with Kinect motion-based controls. Much to the dismay of wireless carriers, it will inevitably work its way into Windows Phone handsets. Skype will also dovetail nicely with Lync, Outlook, Messenger, Hotmail, and any other communications-based initiative at Microsoft.

See if you can count how many of those Microsoft products that Skype was supposed to make better still exist. The rationale for investing heavily in Skype is growing thinner by the day, and Microsoft knows it. Last month, the company announced end of life for Skype for Business and is instead investing in Microsoft Teams -- a Slack lookalike that's actually gaining traction. Where does that leave Skype? Ripe for a spinoff, I'd say. 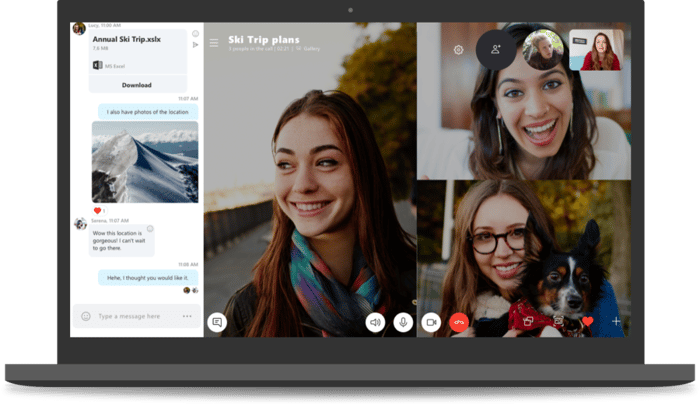 Skype is still widely used, even if it's no longer the strategic tool Microsoft once wanted it to be. Image source: Microsoft.

What to expect now

Microsoft could continue to get value from Skype. Go back to what Rick wrote. As a multinational communications platform with built-in translation, Skype is particularly useful for those who play team games against global opponents, or who use a Surface tablet PC for connecting with friends and family. There's a lot Skype can do for the more than 300 million people who use it. If only shareholders were getting the same benefits.

Skype is organized under Microsoft's Productivity and Business Processes segment, the same segment that sells Office 365 and the Dynamics business intelligence and analytics suite. That made sense when Skype for Business was a crucial part of Office 365. Now that it's closing down to make room for Teams, it's reasonable to expect the remaining Skype subscriptions (paying from $2.99 to $7.99 per month, per user) to provide -- at best -- an immaterial contribution to division revenue and profit.

Imagine what would happen if Skype were spun off, leaving Microsoft to reap the cash benefits of the ensuing IPO while keeping a minority interest in the business. An unleashed management team would have the freedom to build a better all-platforms product and revise its pricing to maximize revenue and profit while also delivering value for the hundreds of millions who use Skype monthly.

Maybe that's wishful thinking. Regardless, it's clear that Skype's relationship to Microsoft's product portfolio is changing. The strategy should change with it.