Let's stop pretending that the older co-working company is a real competitor for the rapidly growing disruptor.

The We Company filed to go public Wednesday, prompting a fresh round of media-bashing for the office-sharing juggernaut. Critics in particular balked at its corporate governance structure, raised questions about self-dealing by CEO Adam Neumann, and threw cold water on the company's $47 billion valuation.

One particular criticism kept coming up: That WeWork's valuation is much higher than that of IWG (International Workplace Group), a global co-working company that owns brands including Regus and Spaces, even though IWG has more revenue and many more locations than WeWork and is profitable. Here's a sampling of the critiques that landed on Twitter:

WeWork is trying to justify its $47B tech-company valuation, lest you wonder why it's not valued like IWG, its much less expensive, bigger (real estate) competitor https://t.co/hzMg683zNv pic.twitter.com/va0q3eYWkG

Oh, its a SaaS company.. (and no, they did not pioneer the concept, Regus has been around since 1989) $WE pic.twitter.com/THtPpPzMLc

Nothing in the above tweets is inaccurate, but they all ignore one crucial difference between the two companies: WeWork is growing at a torrid pace while IWG is barely outgrowing the global economy. In 2018, WeWork's revenue jumped 106%. IWG's only climbed 8%. In the first half of 2019, WeWork's revenue jumped 101%, compared to a 12% increase at IWG. If these two are competitors, it's only in the classic sense of the disruptor vs. the incumbent.

Remember that investors pay for growth above all else. What matters to Wall Street are a business's expected growth and future cash flows, not its current status. This explains why declining businesses often appear dirt cheap, while fast-growing start-ups look so expensive. If you're trying to understand why WeWork is valued at $47 billion while the London Stock Exchange-listed IWG has a market cap of $3.7 billion, the only metric you need to look at is growth rate. 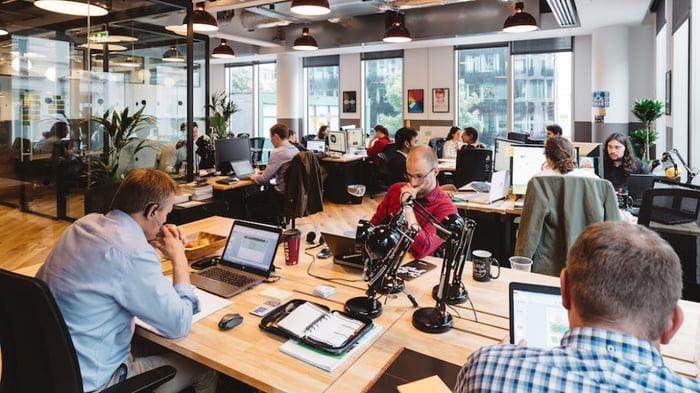 There's no perfect explanation for why WeWork has been able to double its sales every year while IWG has been stuck in neutral, but much of the difference between the two companies has to do with their brands and the experiences they're offering, or at least perceived to be offering. WeWork's brand has caught fire in the media and among the millennial workforce it caters to, and it's a known quantity among the greater public. That's just not true for IWG or any of its brands.

In other words, WeWork has dominant mindshare in its space: When you think of co-working companies, you think of WeWork, not IWG or any of its subsidiaries. WeWork dominates its arena in much the same way Amazon does in e-commerce or Netflix does in video streaming. These companies have competitors too, of course, but none are really in their league.

I've worked at a small independent co-working space near where I live in Brooklyn for several years. When I tell people I work at a co-working space, they almost always respond by saying something like, "Oh, like a WeWork?" or "You mean WeWork?"  In these conversations, no one has ever mentioned another co-working company to me. It appears to be the only company that people know in its business, at least in New York.

Beyond mindshare, the key difference between WeWork and IWG is that WeWork has that intangible "cool" factor that is hard to define and even harder to copy. Hipness can't be measured in the way that financial metrics can, but one decent proxy for a brand's popularity in this day and age is its number of Instagram followers. WeWork has 563,000 followers. Regus has just 24,000. (I couldn't find Instagram accounts for IWG or any of the company's other brands)

As at a bar or nightclub, the quality of the experience a client will have at a co-working space generally comes down to the physical space itself -- its design, aesthetic, energy, etc. -- and the other people there. WeWork, for whatever reason, seems to have the right combination of good workspaces and good people to network with. IWG does not. This also explains why IWG is desperately reorienting its business in a bid to become more like WeWork and capture some of its stardust.

There are plenty of valid reasons to be skeptical of the WeWork IPO, including its corporate structure, the CEO's apparent conflicts of interest, and its sizable losses. But its valuation relative to IWG, or the idea that WeWork's greatest competition is a company that's growing at one-tenth of its rate, are not among them. Ultimately, comparing these two is a distraction from understanding WeWork's business and determining what a reasonable valuation for the company should be.