Please ensure Javascript is enabled for purposes of website accessibility
Log In Help Join The Motley Fool
Free Article Join Over 1 Million Premium Members And Get More In-Depth Stock Guidance and Research
By Rich Smith – Aug 17, 2019 at 8:18AM

An important ally just weighed in on the Argentine presidential contest. Whoever might that be?

After their implosion on Monday and their remarkable rally from Tuesday to Thursday, it was anybody's guess which way Argentine stocks would go next. After the final trading day of the week, it appears we finally have an answer:

Friday morning, shares of Argentine banker Grupo Supervielle S.A. (SUPV 0.59%) briefly rallied as much as 14% before settling back to enjoy a 0.2% gain for the day. Electric utility Empresa Distribuidora y Comercializadora Norte (EDN -1.82%) performed similarly, up nearly 12% in early trading and still ended up 2.4% in the trading session.

On the other hand, just across the border in Brazil, telecom Oi S.A. (NYSE: OIBR.C) is looking like it might have caught "Argentine disease" and ended down 37% for the week. 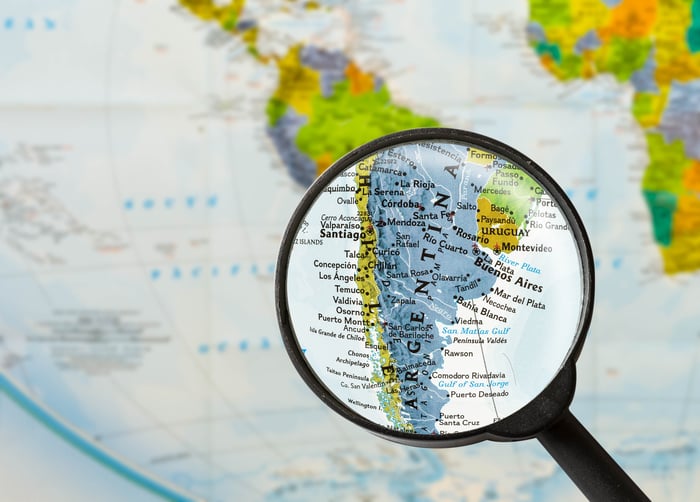 Is there any discernible pattern here? I think there is -- although the pattern isn't the whole story.

Earlier today, German paper DW reported that Brazil is threatening to pull out of the Mercosur trade bloc that it shares with Argentina, Uruguay, and Paraguay if October's elections in Argentina replace Mauricio Macri (an ally of Brazilian president Jair Bolsonaro) with Peronist candidate Alberto Fernandez in the "Pink House."

Although the Brazilian government didn't come right out and tell its smaller neighbor that it should reelect its president, the clear implication is that failing to do so could cost the country a valuable ally in the region and make things even tougher for the Argentine economy. Investors who bought Argentine stocks today may be betting that voters will succumb to the foreign pressure and vote in their economic interests come October -- rejecting Fernandez and staying the course with Macri.

Of course, there's also the very real possibility that Argentina will not vote the way Brazil's government seems to want it to and that Argentina's voters will put Fernandez in office regardless. In that case, and assuming Brazil follows through on its threat, strained economic ties with Argentina could result in a weaker economy for Brazil -- which would not be great news for Oi S.A.

Nor is this the end of worries for Oi investors. We learned yesterday that Oi has just reported even deeper losses in its fiscal second quarter 2019 than it suffered in Q2 2018 -- about $385 million worth of losses.

Brazil's biggest fixed-line telecom carrier is busy building out a fiber-to-the-home network for its customers, necessitating a 51% increase in capital spending that's weighing heavily on earnings. Additionally, local papers are now reporting that the Brazilian government may decide to "intervene" in Oi in order to prevent an interruption in telecom services -- possibly code for a government takeover of the company.

Should worse come to worst and that happens, the outcome of elections across the border would be the least of Oi investors' worries.

Why Argentine Stocks Are Hopping Today

Why Argentine Stocks Bounced Back on Thursday