Dillard's Q2 earnings report was far worse than that of Macy's, but Dillard's stock has held up relatively well -- so far.

Shares of Macy's (M 9.09%) plunged 18% last week, with most of the damage coming after the company reported a sharp drop in profit for the second quarter of fiscal 2019. While comparable-store sales inched up 0.3%, a 60% decline in earnings per share (excluding special items) caused many investors to worry that Macy's ambitious turnaround plan has failed.

By contrast, shares of regional department store chain Dillard's (DDS 12.43%) fell by only 10% last week. What's more, Dillard's stock fell just slightly on Friday, even though the company reported truly awful results for the second quarter after the market closed on Thursday. 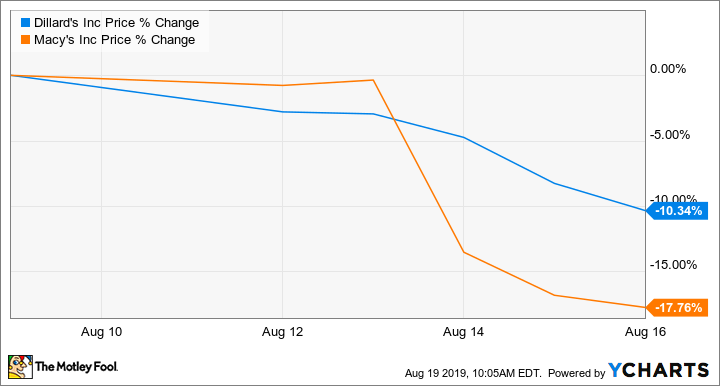 It's not clear why Dillard's stock fared so much better than Macy's shares last week. Perhaps it was because Dillard's earnings release garnered very little media attention compared to that of its larger rival. Regardless, the weak earnings report makes it clear that investors should steer clear of Dillard's.

Profitability has been sliding for years

Like Macy's and many other department store chains, Dillard's posted better results in fiscal 2018. Comp sales rose 2% last year, and Dillard's pre-tax margin stayed roughly steady at 3.2%. Adjusted EPS jumped to $6.12 from about $4.80 a year earlier, driven primarily by the reduction of the federal corporate tax rate and share buybacks.

However, Dillard's growth ground to a halt again in the first quarter of fiscal 2019. The company's flat comp sales performance lagged Macy's 0.7% increase for the same quarter. Furthermore, its retail gross margin fell by 1.4 percentage points, nearly twice as much as what Macy's experienced. The earnings trajectory takes a turn for the worse

Dillard's entered 2019 with too much inventory, and weak sales during Q1 meant that it exited the quarter with an equally problematic inventory glut. This set the stage for Dillard's dreadful financial performance last quarter.

As a result, Dillard's adjusted pre-tax margin fell to negative 3.9% last quarter, compared to negative 0.3% in the prior-year period. The department store operator's adjusted loss per share widened to $1.74 from $0.10 a year earlier. Analysts had been expecting a much smaller loss of about $0.70 per share.

On a year-to-date basis, adjusted EPS has plunged 61% to $1.09 at Dillard's. That was far worse than Macy's 40% adjusted EPS decline over the same period. The only decent news in Dillard's recent earnings report was that inventory was flat year over year by the end of the quarter. Even that is less impressive than it sounds, as Dillard's had far too much inventory at this time last year, leading to big markdowns and gross margin erosion in the third quarter of 2018.

It's possible that Dillard's performance will bounce back sometime in the next few quarters. But investors shouldn't count on it. Dillard's has typically limited capex to less than $150 million annually in recent years, about 2% of revenue. By contrast, Macy's has been spending about $1 billion a year, or roughly 4% of its annual revenue. In other words, while Macy's has been investing heavily in its stores and e-commerce business to drive better results, Dillard's has cut capex to the bone, preferring to put its cash toward share buybacks. 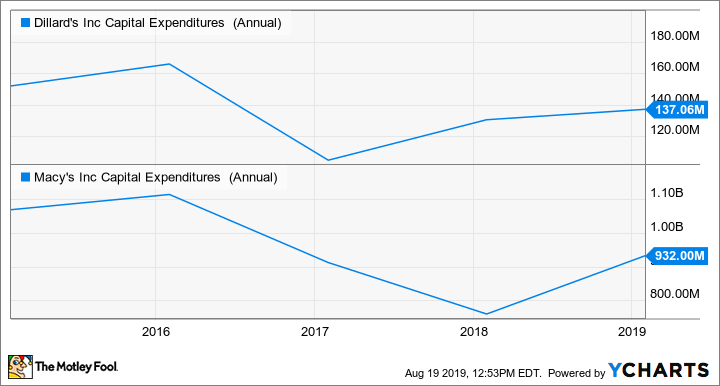 Capital expenditures for Dillard's and Macy's. Data by YCharts.

In the short run, these share buybacks -- along with high insider ownership and the company's substantial pool of real estate assets -- could keep Dillard's stock afloat. However, most of Dillard's real estate isn't worth very much. Moreover, the Dillard family's large stake in the retailer means that other shareholders have very little say in the company's decisions.

With the collapse in Dillard's profitability showing no signs of abating, investors should avoid Dillard's stock. Macy's has a much better chance of turning itself around, due to its greater scale, better real estate, and the growth investments that management has made over the past few years.