Editor's Note on October 1, 2019: After recent allegations published by The Wall Street Journal regarding CEO Mark Parker’s involvement in an experiment involving performance-enhancing drugs, the ESG team is re-evaluating Nike’s framework score. These allegations are one of a multitude of examples of mismanagement from the highest office in the company, and it is important that we consider holistic and genuine stakeholder treatment by Nike with this new information in mind.

Immediately after the incredible victory by the U.S. in the FIFA Women's World Cup, a commercial came on. It started with a call and response of "I believe that we" and led into a fast-paced crescendo of what women can achieve -- not just being the best women's soccer team but being the best team, period. Then it showed female faces carved into Mount Rushmore. It ended with a simple message: "This team wins. Everyone wins."

Who was responsible for this emotional and inspirational battle cry? Nike (NYSE:NKE), of course.

Nike is the largest seller of sports apparel and footwear in the world, operating in six key categories: Running, Nike Basketball, Jordan, Football (soccer), Training, and Sportswear. It generates revenue both internationally and domestically with the majority (59%) of sales achieved outside the U.S.

It's important to note two things. First, Nike has two fully owned subsidiaries in Hurley and Converse, and second, the Jordan brand is one of the most popular sneaker brands in the world. Nike is the 21st most valuable brand (and the first most valuable apparel brand) in the world, according to BrandZ. Its mission is "to bring inspiration and innovation to every athlete in the world."

Since its founding in 1964, Nike has had a tumultuous journey. It has evolved from a corporation synonymous with sweatshops in the 1990s to a leader in sustainability. After allegations of sweatshop labor in Nike factories, it was the first company to release a "Manufacturing Map." It has continued to make strides in supply-chain transparency in its annual sustainability report and by having a Corporate Responsibility, Sustainability & Governance Committee in its board.

According to Sustainalytics' ESG Risk Ratings framework, Nike is considered low risk, with a score of 16.0, putting Nike in the top 9% of global companies. It was recently on CR Magazine's list of 100 Best Corporate Citizens, was ranked No. 39 on the JUST Capital JUST 100 list, is on LinkedIn's Top Companies to Work For in 2019, and is a member of the Dow Jones Sustainability Index, among many other accolades.

Based in Beaverton, Oregon, Nike employs more than 76,700 employees worldwide, boasts a market cap of $130 billion, and generated more than $39 billion in sales in 2019. According to NPD Group, Nike has a 32.2% share of the global footwear market, with the Jordan brand owning a 9.2% share, and has a 13.9% market share of the activewear market. Phil Knight, one of its co-founders, continues to be involved as Chairman Emeritus, while Mark Parker serves as current CEO and Chairman of the Board. 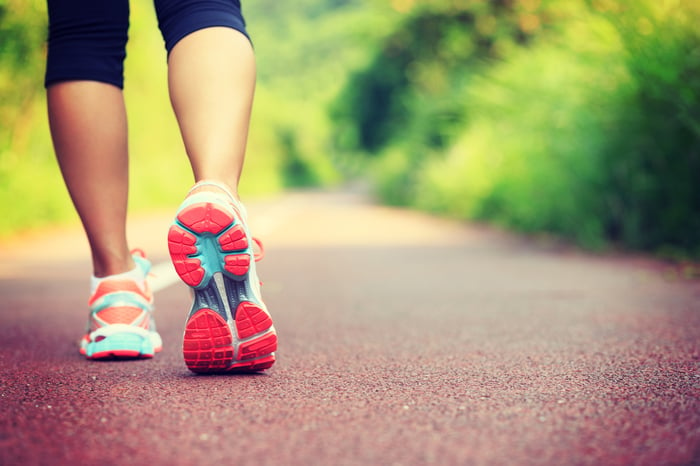 Nike possesses many of the qualities attributed to a high ranking on The Motley Fool's ESG Checklist, but its long history may raise some questions about its ESG scores. Let's analyze Nike using The Motley Fool's 10-question framework.

1. Does the company treat its employees well?

No. The CEO-to-median-worker-pay ratio for Nike is 379:1, which is higher than the national average. (The average employee/pay ratio is 287, according to Vox.) Additionally, the median employee at Nike makes $24,000, which is much lower than the national average of $60,336. Nike executives have unnecessary perks like flying in Nike's private jet, having their rent paid, and more benefits that don't align with a culture that promotes the happiness of their lower-ranking employees.

The pay of factory workers is not considered in the median worker ratio because these workers are employees of the distributors, not of Nike. However, their treatment is pivotal to the success of Nike, and an ESG leader would prioritize the experience of its workers globally. Nike has worked to comply with child labor laws (no factory worker is under the age of 16) and allows independent monitoring of working conditions at its factories. It's reported that all factory workers are required to earn the standard minimum wage in the country, as well as have one full 24-hour period off and not work more than 60 hours per week.

Areas for Improvement: While Nike has made improvements in its transparency about the treatment of employees, it's important that it continues to monitor the management of the factory workers and prioritize the health and wellness of employees at all levels.

Yes. Nike has a moonshot ambition of halving its impact while doubling its revenue. It releases a clear sustainability report that has transparent metrics by which it measures the progress toward its goals. Its candidness in admitting when goals aren't achieved as planned is admirable. As of 2018, 73% of its footwear and apparel used some recycled materials, and between 2010 and 2018, 6.4 billion plastic bottles were made into footwear or apparel.

It's also a member of the RE100 -- meaning it has committed to working toward using 100% renewable energy by 2025. Nike has such a large scale that as it continues to emphasize sustainability, it's poised to make a very strong impact.

Areas for improvement: While Nike's striving to decrease its carbon footprint, as of 2018, the carbon footprint per product has increased. It's testing ways to limit carbon impact with new shipping practices, and this is a metric that should be continually monitored.

No. In May of 2018, completed questionnaires were given to its CEO related to the treatment of women at Nike. These allegations ranged from business meetings at strip clubs to being forcibly kissed. In response to these claims, a total of 11 executives stepped down from Nike and a complete overhaul of its culture was implemented. Since then, Nike added three more members to the board (all from previously underrepresented groups).

Nike seems to be prioritizing diversity and inclusion in its workforce now: The representation of females in VP levels are up to 36% and there's a 1:1 pay ratio for all underrepresented groups. The company doesn't have a squeaky-clean track record in this area but deserves recognition for moving forward in an intentional and inclusive way.

If this intentionality and focus continue, ESG investors hope that Nike can potentially be included in the Thompson Reuters Diversity and Inclusion Index, the Bloomberg Gender Equality Index, or the Ethisphere's World's Most Ethical Companies list as a strong signal of the improvements it has made. Six of the 14-person board are from previously underrepresented populations, and 1 out of the 5 named executive officers is female. Due to the infancy of this diversity-and-inclusion initiative, the company hasn't yet reached a level of a yes. But there's hope that, as Nike continues to deliver on these initiatives, this score could change.

Areas for Improvement: Unwavering focus on the initiatives that are still fairly new, increasing board level and senior executive diversity, and making sure that traditionally underrepresented groups feel safe and supported at Nike.

Yes.  Nike has a dual-class structure, with Knight and his son Travis effectively controlling all of the votes. While this is generally a cause for concern, the Knight family seems to be aligned with the wider interests of long-term shareholders.

This is evident in the long-term financial goals set for the company, which include gross margin, earnings per share (EPS), and return on invested capital (ROIC ) -- one of the best indicators of outperformance of a company. It's important to emphasize the rarity of long-term financial guidance: In this area, Nike is leagues ahead of most of its competition.

These are Nike's long-term financial goals through 2023:

Yes. Nike deserves recognition for its pursuit of a transparent, ethical supply chain. (This is another instance where Nike has taken strong steps forward in the wake of a scandal.) This is a capital-intensive business, and Nike is taking steps to use renewable materials and decrease carbon intensity and is one of the companies signed on with RE100 to work toward 100% renewable energy. For example, 32 billion liters of water have been saved while utilizing sustainable cotton, and 6.4 billion plastic bottles have been transformed into footwear and apparel since 2010.

The Flyknit products are made from recycled polyester and use 60% less scrap waste than a typical shoe. Nike Air's soles are composed of at least 50% recycled material (which diverts more than 50 million pounds of waste from landfills). If Nike Air were a stand-alone athletic company, it would be the third largest in the world.

Yes. Nike has a net cash position of $1.2 billion and a sky-high interest coverage ratio of 36.4, which demonstrates its financial health as a company and its ability to service debt.

Yes. Nike has had a five-year compound annual growth rate (CAGR) of 7.1% that corresponds with the top-line growth of 7.47% this past year. It has consistently strong top-line growth even as the company expands, which shows the power of the Nike brand and its products. Nike generated a five-year average (2015-2019) ROIC of 31%, consistent with its long-term goal of achieving low-30% ROIC.

The consistent top-line growth paired with strong ROIC indicates Nike is a member of an exclusive club of high-quality growing businesses. As it continues to endorse athletes with a strong following and advertise the sustainability aspect of its products, Nike will continue to be the brand of choice for socially conscious consumers, as well as avid sports fans. This distinction that Nike has carved out for itself is a tailwind that supports its growth as a business. 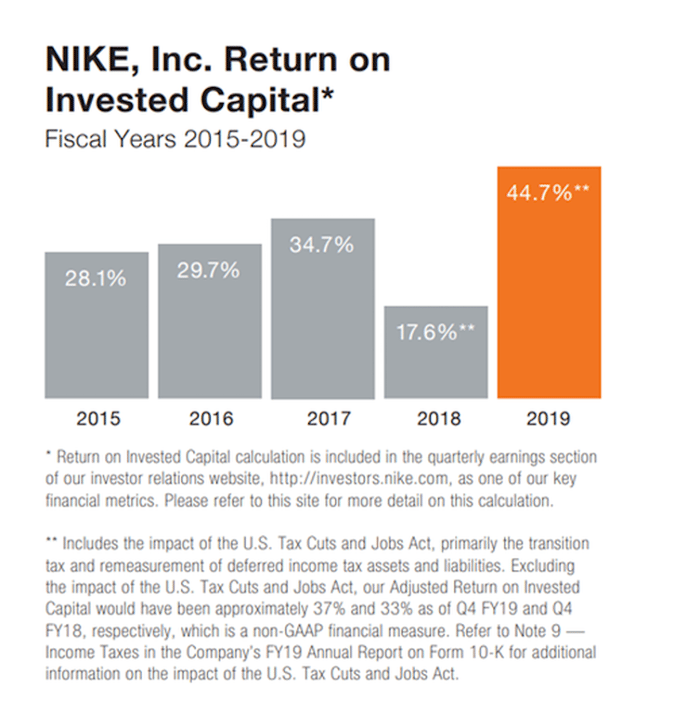 Yes. As mentioned before, Nike has strong and consistent top-line growth paired with a very high ROIC so its free cash flow (FCF) continues to grow nicely. Nike should be able to achieve its goal of maintaining high ROIC in the 30% range as it leverages its pricing power and continues to grow its higher-margin direct-to-consumer and digital businesses.

As you can see in the chart below, Nike generates average FCF margins of roughly 10% and average FCF-to-net-income of roughly 100%, indicating the high quality of its earnings. Nike's FCF grew at a five-year CAGR of almost 18%.

Yes. The management team is poised for long-term growth and their compensation is based on metrics that align with this type of focus. These metrics are revenue growth, gross margin expansion, EPS growth, and ROIC. This type of mindset and metrics show potential investors that Nike is thinking years into the future as it makes strategic decisions.

Areas for improvement: While rare, a metric for sustainability in the main company goals and compensation would be wonderful to see. This would show that Nike is making sustainability goals a top priority moving forward.

10. Does the company have a medium or low risk profile?

Yes. Nike operates in a cyclical and low-barrier-to-entry sector that is wholly dependent on customer preference -- an inherent risk for the company. However, Nike has consistently strong top-line growth with little debt and is not overdependent on any customer or supplier. This puts the company firmly in the medium-risk category.

An 8 of 10 makes Nike an ESG top performer

Nike scores an 8/10 on our ESG checklist. This is a company that has lofty goals and is intentionally striving to meet them, which we admire. We think it's a strong ESG company with some work to do in its treatment of employees, as well as diversity and inclusion, but Nike is headed in the right direction in both of these areas.