Despite the trade war, Chinese consumers are spending.

Investors in Chinese companies have had a tough time lately. The trade war has taken a toll on the country's overall growth, and the Chinese currency has depreciated significantly versus the U.S. dollar. That means even if Chinese companies are doing well, every dollar of their earnings in Chinese yuan is worth less in dollars to U.S. investors.

Yet the current storm clouds could provide long-term investors with an opportunity. The big slowdown in China has been in the country's industrial and manufacturing sectors, which have contracted for the past three months.

But China's economy is more than just its manufacturing sector. The country is being driven more and more by consumer spending, just like the U.S. economy. Looking at recent results from leading e-commerce platforms Alibaba (BABA 14.79%) and JD.com (JD 5.04%), in fact, you wouldn't notice any downturn. Both companies reported healthy growth above analyst expectations. For those looking to profit from the Chinese consumer when others are fearful, which consumer-centric Chinese e-commerce player is the best buy today? 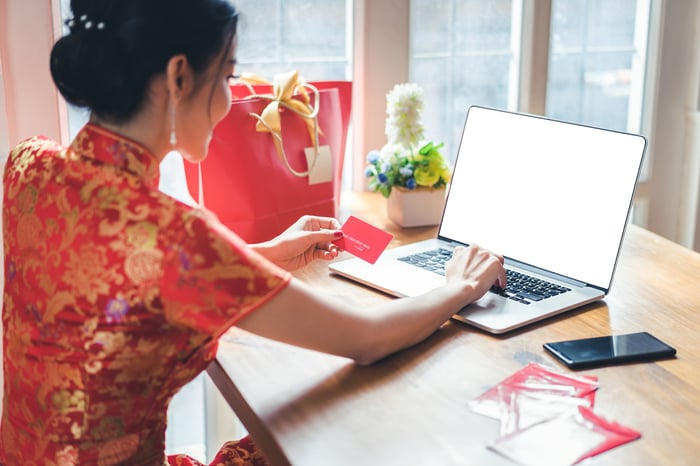 The first thing to know about Alibaba and JD.com is that, while both are e-commerce platforms, they have slightly different business models. Alibaba is more of a pure platform, making money from commission fees and advertising, leaving the capital-intensive parts of e-commerce like inventory management and shipping to its merchants.

JD.com, however, embraced the hard work of selling first party (1P) goods as its initial business model, building out its own massive warehouse footprint across China and taking ownership of physical goods itself. While far less profitable than Alibaba's model, JD is able to better control the quality of the customer experience, and initially concentrated on high-value goods like appliances and electronics for well-off customers.

Both companies are now evolving. Alibaba is taking its massive profits and investing to become more of an integrated online-and-offline retailer. Alibaba has grown its large Hema Supermakets, bought out food delivery platform Ele.me, and taken a controlling stake in logistics and delivery platform Cainiao. Alibaba is also more of a diversified conglomerate: It is the Chinese leader in cloud computing, and also a big player in entertainment through its Alibaba Pictures and streaming service Youku Tudou. However, these newer businesses are much lower-margin than its core platforms, and in many cases even lose money.

JD.com has mostly stayed focused on its e-commerce platform and its logistics business, as it long ago ceded its cloud and entertainment businesses to large minority investor and partner Tencent. Nevertheless, JD has also embraced newer businesses, such as third-party sales from other merchants that use JD's massive warehouse and logistics footprint, as well as increased digital advertising on its platform. In contrast to Alibaba, these newer businesses are more profitable than the core JD Mall.

Which company is winning the battle for the Chinese consumer? Let's take a look at relevant metrics.

As you can see, not only is Alibaba's overall growth superior to JD's, with big contributions from its high-growth cloud computing and first-party sales, but even Alibaba's core "legacy" businesses on its Tmall and Taobao sites are growing faster than JD.

That being said, we can also see that JD is beginning to leverage its investments and expand its margins. From near-breakeven last year, the company's adjusted operating income surged in the most recent quarter. Adjusted gross margin grew to 14.7% and adjusted operating income grew to 2.1%, both all-time highs, as the company not only reaped economies of scale in its core 1P business, but also took advantage of the benefits of its logistics and advertising businesses, which are higher-margin and growing faster.

JD's management has long said that the company could reach net margin in the high-single digits, and this past quarter showed the market that it does in fact have a shot of expanding margins significantly, making that goal seem very achievable.

Although they are growing much faster, Alibaba's newer businesses are much lower-margin than its core platforms, and its adjusted EBITA (earnings before interest, taxes, and amortization) margin fell from 33% to 30%.

Investors will probably take comfort in Alibaba's more diverse growth prospects and potential for higher margins as an asset-light platform, however, its relative valuation reflects a lot of these superior characteristics.  Alibaba's market capitalization is about 10 times JD's, and its price-to-sales ratio is significantly higher as well. 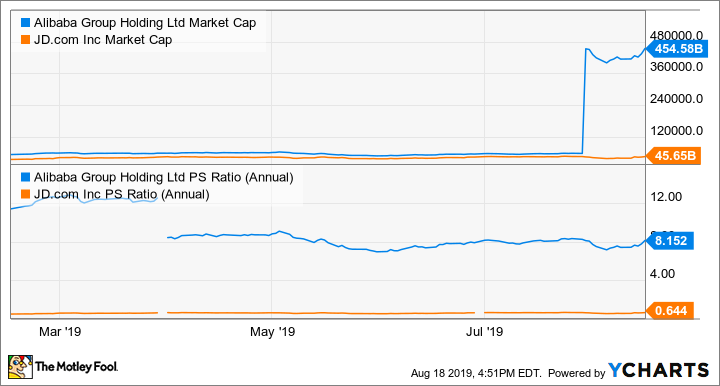 However, the market is also pricing in more margin expansion ahead for JD, with its forward P/E ratio and EV-to-EBITDA ratio actually tracking a bit higher than Alibaba's. 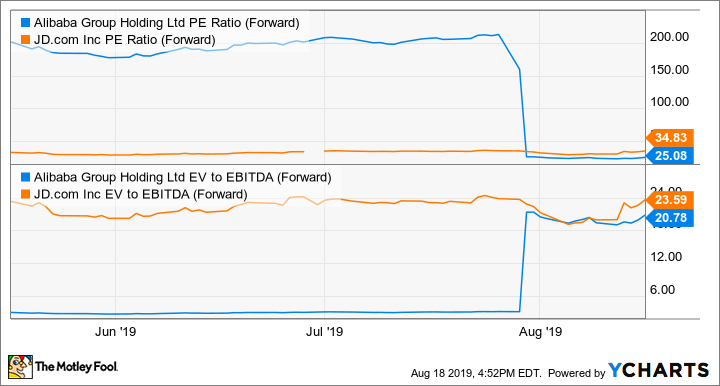 Thus the choice between Alibaba and JD is a difficult one. For those with a more "risk off" mentality, Alibaba is the better choice -- it has higher profit margins and a more diverse business. However, JD.com could potentially have more upside given that it is just scratching the surface of profit growth, and it's also a much smaller company. So for those looking for more upside, JD.com may be the play.

Since the call is relatively close, you would do well to own both companies. Both Alibaba and JD appear entrenched as market leaders that stand to benefit from the massive growth of the Chinese middle class.