Supply chain disruptions and a weak laser market will weigh on the company's results.

Shares of optical and electronic manufacturing services provider Fabrinet (FN 2.54%) checked all the boxes with its fourth-quarter results, beating analyst estimates across the board and registering strong revenue and earnings growth. But the company is facing some headwinds going into the new fiscal year, which pushed its first-quarter guidance well below expectations. Here's what investors need to know.

Despite what Fabrinet CEO Seamus Grady called "unusual business dynamics" experienced during the fiscal fourth quarter, the company managed to grow both revenue and adjusted earnings at double-digit rates.

The blacklisting of Chinese tech company Huawei hurt Fabrinet's revenue by approximately $9 million in the quarter, as the company manufactures products for customers that ship to Huawei. However, this was offset by better-than-expected performance elsewhere.

Fabrinet's bottom line was boosted by the company's cost-cutting efforts -- selling, general, and administrative expenses were down 16.8% from the prior-year period to $13.8 million. The company also recently launched a new initiative to raise efficiency, with a goal of halving the number of people and space required while doubling its output.

"Through this initiative, we have improved operational efficiency and reduced cycle times for a number of processes through increased automation and optimization and the elimination of nonvalue-add activities. This initiative has enabled us to free up close to 120,000 square feet of manufacturing space at our Pinehurst facility in Bangkok," said Grady during the earnings call. 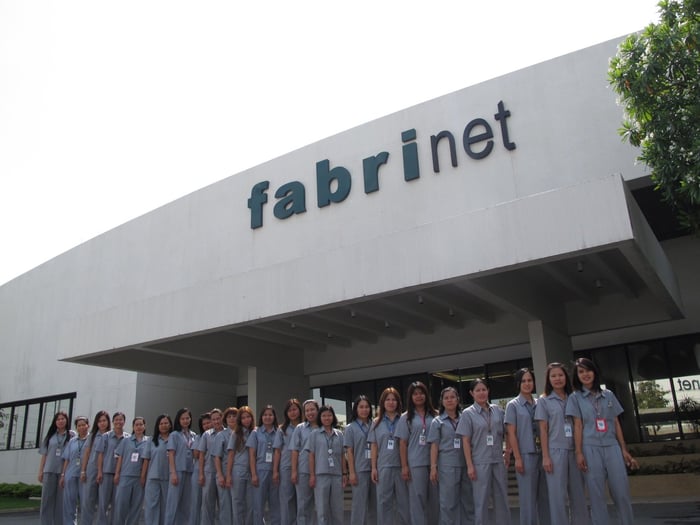 While Fabrinet put up strong fourth-quarter numbers, the company expects to produce less impressive results in the first quarter of fiscal 2020.

First-quarter revenue is expected between $386 million and $394 million. The midpoint of that range represents year-over-year growth of just 3.4%, and it represents a sequential decline of 3.7%. Analysts were expecting revenue guidance of $407.3 million.

Fabrinet's earnings guidance also came up short. The company sees first-quarter non-GAAP EPS between $0.80 and $0.84, down from $0.92 in the prior-year period and well below the $0.96 analysts were expecting.

Fabrinet expects the timing of changes in supply chains, related to customers restarting some shipments to Huawei, to impact the optical communications business in the first quarter. Also having a negative effect is a slowdown in the industrial laser markets, which the company expects to last for a couple more quarters. Fabrinet sees these issues as temporary.

Grady commented on a discrepancy between Fabrinet's guidance and that of some of its customers:

Following Fabrinet's weak first-quarter guidance, analysts cut their price targets on the stock. Piper Jaffray maintained an overweight rating, but it reduced its price target by $5 to $64 per share. Meanwhile, B. Riley shaved $2 off its price target, bringing it down to $54 per share. The stock was trading around $49 per share Tuesday morning.

Why Fabrinet Stock Jumped on Tuesday

Why Shares of Fabrinet Slumped Today