Big Brown generates much more revenue from Amazon, but it faces similar margin pressures as its rival.

The first shoe FedEx (FDX -8.10%) dropped over Amazon.com's (AMZN -7.16%) ambition to become a full-fledged transportation and logistics carrier was not renewing its Express contract with the e-commerce giant for package delivery. Now the next shoe has fallen: FedEx said it will not renew its contract for ground delivery for Amazon. 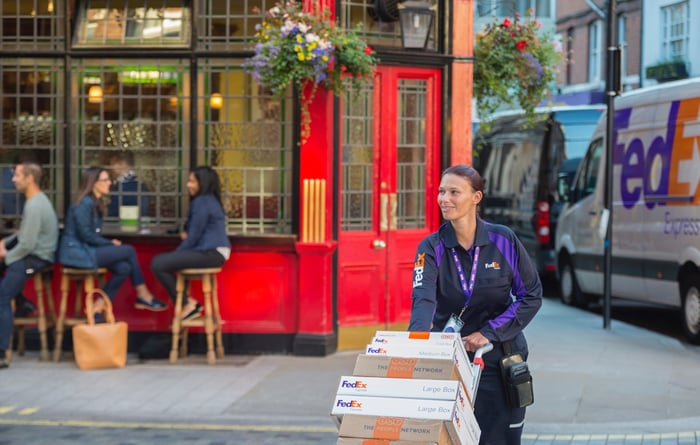 FedEx maintains the changing relationship "is consistent with our strategy to focus on the broader eCommerce market" and recently acknowledged in its annual Securities and Exchange Commission filing that it now considers Amazon to be a competitor. It's clear the last shoe to drop will be FedEx not renewing its contract for international package delivery. At that point, the two will have completely severed their relationship.

The real question is, what took FedEx so long to respond to the threat, and will UPS (UPS -5.96%) eventually follow suit?

Amazon has invested substantial sums of money in building out an air cargo fleet. It plans to open several airport hubs around the country to service its planes; it has launched a cargo van delivery network and is willing to work with individuals, including its employees, who want to start up their own delivery businesses; and it's gotten into first-mile shipping with transocean shipping from China.

It was costly for FedEx to maintain its relationship with Amazon as a result of the discounts the e-commerce giant negotiated because of its high volume of shipments it generated. But Moody's analyst Jonathan Root said Amazon was also one of FedEx's "least profitable customers on a margin basis" and severing ties with Amazon suggested the retailer "would not agree to financial terms that would meet FedEx' needs."

Continuing its relationship with Amazon was effectively providing support for a company that one day may try to supplant it. But FedEx will find it easier to sever ties with Amazon than UPS will.

No losers among the competition

FedEx said Amazon accounted for only 1.3% of its total annual revenue, or about $900 million based on last year's $70 billion total. Of course, it might have been more if Amazon hadn't been continuously developing its own capabilities. However, this is a smaller percentage than Amazon accounts for at UPS, though even then, the figure is undoubtedly less than 10% of UPS's $72 billion total revenues, else it would be required to disclose it.

Analysts estimate FedEx handled only about 4% of Amazon's volume, while UPS accounts for about 17% (the USPS bears the heaviest burden, with about one-third of deliveries handled by the post office).

Yet UPS suffers from the same issue of Amazon being a low-margin customer, though analysts say the retailer is not a no-profit one. And because Amazon still enables UPS to profit from their arrangement, they're not likely to drop it as a customer. At least not yet, though if Amazon builds out its own logistics and transportation network sufficiently, we're more likely to see Amazon leave UPS than the other way around. It's cheaper for Amazon to ship packages through its own network than through UPS or FedEx.

Still, there could be some upside for UPS, which could pick up at least some of the additional volume that FedEx is dropping. Big Brown reportedly saw a 30% uptick in next-day-air volume in the second quarter after FedEx stopped Express air delivery for Amazon.

FedEx decision to drop Amazon ground deliveries is likely more a decision to telegraph it's availability to service the e-commerce leader's rivals, like Walmart. The carrier anticipates e-commerce will only grow in the future (albeit led by Amazon), and it is clearing the decks now to prepare for it. Most of FedEx's business is of the B2B variety; shipping to consumers is much smaller, but it is the fastest-growing portion of delivery.

As Amazon.com heads into the important holiday season, the decision by FedEx to cut off ground shipments could pressure the e-commerce giant, especially since Amazon has stepped up its efforts to offer one-day shipping. And even if international shipments are only a tiny portion of the whole business, they will likely be the next segment to fall.

But UPS won't follow FedEx lead anytime soon as its position with Amazon likely improves near term. FedEx cancelling its contracts and the post office struggling financially puts UPS in a better spot. But whether it's UPS that makes the first move business or Amazon.com becoming a larger, more fully realized logistics and transportation company, those two parties will also one day likely part paths too.