Don’t sweat the slowdown at this brick-and-mortar retailer.

The retail apocalypse has claimed many victims: Specialty stores are dying off; department stores are in a seriously stubborn funk; and big-box stores have had to rethink how they treat their real estate. The ascendance of Amazon and its digital-first peers has been a serious game changer.

But one segment of retail still shines, and that's treasure hunt-style off-price retailers like the ones TJX Companies (TJX) specializes in. The parent of T.J. Maxx, Marshall's, and HomeGoods just reported its 20th straight quarter of rising comparable-store sales (a combination of foot traffic and average ticket size), but the metric took a serious breather. The stock is a bit pricey given the outlook for the rest of the year, but investors have no need to worry. TJX Companies will be just fine. 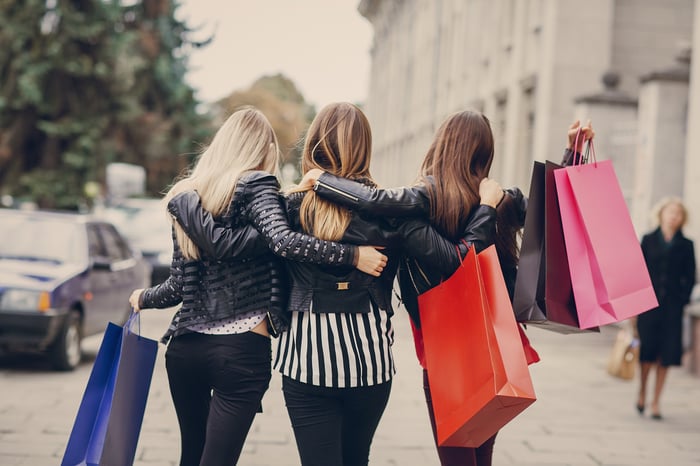 Sometimes it's all in the timing

Investors expressed some disappointment with comparables in the second quarter of the 2020 fiscal year (the three months ended Aug. 3, 2019). Comps across the whole network of existing stores slowed to a 2% year-over-year increase, compared with 5% in the first quarter. Since TJX is a large chain with more than 4,400 locations around the globe, comps are the most important metric that drive both overall revenue growth and bottom line earnings. The 2% bump in comps thus helped TJX deliver a 5% and 7% increase in revenue and earnings, respectively.

Paired with the first quarter, TJX is having a decent enough year so far, though a strengthening U.S. dollar against foreign currencies is taking its toll on the bottom line.

But what about the slowdown? It's worth noting that, because of the big 6% surge in the year-ago period, it was always going to be tough to lap that pace of comps growth in the second quarter. It's not just about driving more foot traffic and bigger customer purchases; a shifting calendar -- including the ever-changing timing of Easter, an important apparel-shopping event -- also has an effect.

Besides, TJX is having a good year, especially relative to its peers. According to the U.S. Census Bureau, spending is down 0.5% at clothing stores and home goods and furniture stores so far in 2019 compared with 2018 results. T.J. Maxx, Marshall's, and HomeGoods are all in positive territory this year, implying that the discount chains are gobbling up market share from the competition.

Plus, guidance for the full fiscal year was maintained, with management calling for 2% to 3% comps growth and a 4% to 7% increase in earnings. Not too shabby given the decline at other brick-and-mortar retailers.

While TJX continues to deliver here in the States, international is where the real growth is at. Management continues to report it is the only physical-store discount chain in Europe and Australia offering its particular brand of apparel treasure hunting, and the concept is a winning one.

Comps in Europe and Australia increased 6% in the second quarter -- up from 4% in 2018 -- and the company opened a handful of new locations on both continents in the last few months. Known as TK Maxx and HomeSense outside the U.S., both chains are small, and by all indications, have a long runway of growth ahead of them.

There is one blight, though, and that's the current valuation. At just under 20 times one-year forward expected earnings, it's a bit high for a company forecasting mid-single-digit earnings growth for the immediate future. Nevertheless, TJX has a decent enough cash return policy to help soften any misgivings some may have for a stock that isn't exactly a bargain. A share repurchase program is in place, and the dividend -- which was hiked 18% earlier this year -- is currently yielding 1.7%.

With digital retailing still reshaping the industry, TJX remains a solid pick among brick-and-mortar stores. Though the numbers have been slightly sluggish most recently, the chain is picking up market share and expanding internationally. A lot of headwinds are keeping the stock in check at the moment, and the higher price tag keeps me from personally making a purchase, but the recent report and near-term outlook seem more like speed bumps than anything else.