Please ensure Javascript is enabled for purposes of website accessibility
Log In Help Join The Motley Fool
Free Article Join Over 1 Million Premium Members And Get More In-Depth Stock Guidance and Research
By Dan Caplinger – Aug 22, 2019 at 8:05AM

Often, even when an industry is going through tough times, the best companies in the sector will find ways to outperform. Yet despite the strong reputation that Nordstrom (JWN 2.21%) has for quality in the department store retail space, the upscale retailer hasn't been able to avoid all the turmoil that its peers have suffered over the past several years.

Coming into Wednesday's second-quarter financial report, investors were hoping that Nordstrom would be able to avoid the worst of the difficulties hitting retail, and they wanted to see it bounce back from a tough period last quarter. Its results weren't exactly pretty, but they were encouraging for those who'd feared far worse. Moreover, even though the company does see the potential for further difficulties ahead, shareholders seemed to have many of their long-term concerns allayed by the report.

Making the best of a tough situation

Looking at Nordstrom's second-quarter results, you wouldn't necessarily have thought the report was all that good. Revenue fell 5% to $3.87 billion, and that decline was worse than the roughly 3% drop that most of those following the stock were looking to see. Net income fell 13% to $141 million, but the resulting earnings of $0.90 per share was a lot better than the $0.75-per-share consensus forecast among investors. 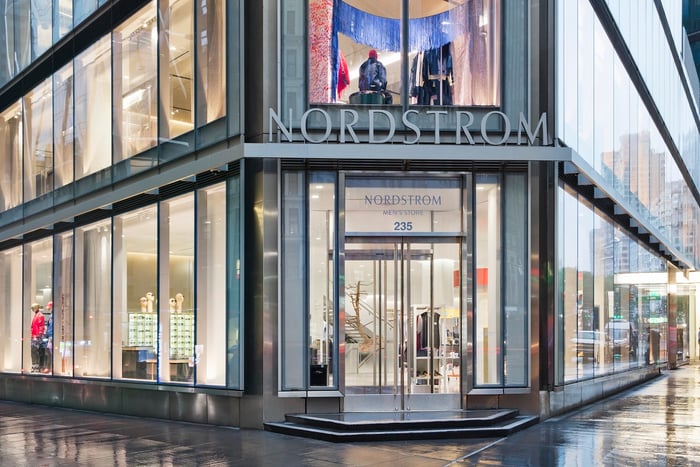 Nordstrom also saw a lot of crosscurrents in its business. On one hand, the retailer managed to improve its internal efficiency to help drive better bottom-line performance. In particular, inventory levels fell 6.5%, and Nordstrom argued that this put the retailer in a strong position to adjust its mix of future merchandise to align more closely with customer demand. However, revenue came in toward the low end of the retailer's projections, and Nordstrom blamed a tough start to the quarter generally as well as subpar results from its annual anniversary sale event and its off-price Nordstrom Rack business.

One area where Nordstrom has tried to prioritize growth is in its e-commerce channel, and there, the results were somewhat encouraging. Even in a tough retail environment, Nordstrom posted 4% gains in total company digital sales. Online purchases now make up about 30% of the retailer's total revenue.

Nordstrom has also made strides toward building up its loyalty program. The Nordy Club now boasts 12 million members, up 12% from a year ago. Loyalty members are important as they make up almost two-thirds of total sales at Nordstrom.

Co-president Erik Nordstrom tried to put the results into the perspective of longer-term ups and downs. "We're focused on driving our top line," Nordstrom said, "and while this can take time, we are confident in our ability to manage through cycles." In particular, the executive pointed to its inventory and expense discipline in keeping the damage to the company's bottom line as small as possible.

Can Nordstrom bounce back?

The department store retailer also has high hopes for the future. In Erik Nordstrom's words, "We remain encouraged by our key initiatives, including our local market strategy, and are making good progress on key areas of focus that we believe will collectively drive increased value creation for our shareholders." The opening of its flagship store in New York City on Oct. 24 as well as two Nordstrom Local neighborhood hubs in the New York area should help bolster the company's presence in that key metropolitan market.

Yet Nordstrom pulled back its guidance for the full fiscal year. The retailer now expects sales to fall about 2% from year-earlier levels, and it lowered the upper end of its earnings guidance range by $0.15 per share. The new earnings outlook is for between $3.25 and $3.50 per share.

Even with that assessment, though, Nordstrom shareholders seemed pleased that the retailer doesn't expect possible additional tariffs on Chinese imports to have much of an impact. The stock climbed 12% in after-hours trading following the announcement. Nordstrom still faces hard conditions in retail, but it seems to be doing what it needs to do to turn the tide and get itself in position to start growing again in the near future.