Delays in spending due to trade concerns threaten growth prospects.

Emerson Electric (EMR -0.38%) CEO David Farr always gives great color on the global industrial backdrop, but investors can be forgiven for wanting to cover their ears during what he had to say on the company's recent third-quarter earnings call. This year certainly hasn't panned out as expected, and the weakness that caused him to cut guidance in the last earnings report extended into the third quarter. Let's look at what was said and what it could mean for other industrial companies.

The table shows the deterioration in the company's end markets through 2019. The signs of weakness were evident in the second-quarter results in May, with management lowering guidance for automation solutions. The reasons were poor weather and a pause in spending in the Permian Basin that hurt upstream oil & gas spending on process automation solutions. The hope was that these issues would be rectified later in the year as the weather improved and new pipelines would be added to the Permian Basin, leading to an increase in capacity and, subsequently, capital spending. 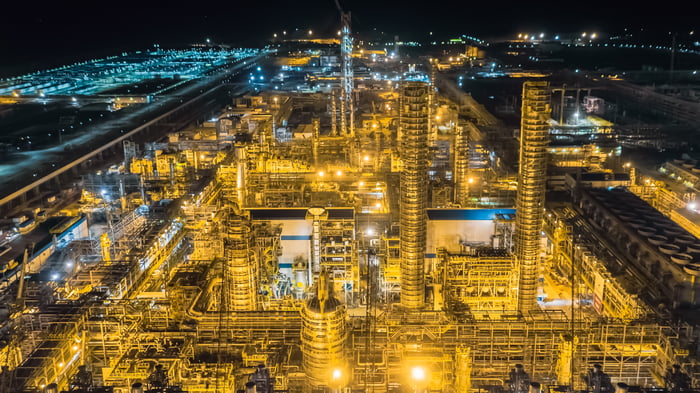 Meanwhile, commercial & residential solutions (largely a collection of heating and air conditioning businesses) saw some inventory destocking in the second quarter combined with weakness in Southeast Asia and the Middle East.

Fast forward to the third-quarter results, and the hoped-for improvement didn't happen. Sales guidance was lowered, and EPS guidance was maintained only because of a more favorable expected tax rate of 21% instead of 23%. What went wrong?

Farr cited unfavorable weather in North America and Europe as being largely responsible for the 1% decline in underlying sales (which excludes foreign exchange movements and acquisitions) in commercial & residential solutions. But he guided toward a "slightly positive" growth rate in the fourth quarter.

Frankly, there's been no consensus on the issue of weather in the quarter, with Lennox International citing it as a reason for weakness. United Technologies' Carrier had a weak quarter, too, but Ingersoll-Rand appeared to buck the trend with high-single-digit growth in bookings in North America and Europe in its most recent quarter.

All told, the segment probably deserves the benefit of the doubt, but investors need to watch for what Emerson's peers are saying.

A deeper concern. Farr said a few areas "missed our expectations" and cited weakness in the upstream oil & gas industry in the Permian Basin, while automotive and semiconductor discrete automation had very tough quarters. Moreover, customers continue to be "cautious" and orders have been delayed.

In fact, Farr said that the number of projects it had "committed not booked" rose to more than a $1 billion from $800 million in February.  During the earnings call Farr explained that projects committed to typically have a "shelf life" of 12 months to 18 months before they book, but obviously the longer they stay as mere commitments the more likely it is that they don't get booked.He also said $350 million of projects had been delayed from 2019 to 2020, and $450 million from 2019 to 2020 & 2021.

Alongside the growing "committed not booked" number issue  it's a fact that protracted slowdowns usually start with a short-cycle weakness and delayed long-cycle orders, such as large-scale process automation projects. Moreover, he gave a gloomy outlook: "I see the slowdown lasting well into 2020, until I see some resolution around what's going to happen with the trade discussions that we all face, and from my perspective that could last easily well past the election in November of 2020."

Farr's commentary is matched by that of Emerson's peer and onetime acquisition target, Rockwell Automation (ROK -0.68%). Rockwell's CEO Blake Moret also slashed guidance as the semiconductor and food & beverage businesses joined its automotive sector by showing weakness during its recent third quarter. Moret cited strength in the oil & gas sector in Rockwell's third quarter, but if Farr's gloomy prognosis is correct, then Rockwell could disappoint investors in the fourth quarter.

Similarly, Caterpillar is expecting a pickup in spending from the Permian Basin in its fourth quarter, and Honeywell International's management also spoke of some process projects being pushed out a bit.

Unfortunately, Emerson's outlook doesn't suggest the company will quickly bounce back from a couple of weak quarters, and this suggests there could be some disappointment in store for Rockwell, Caterpillar, Honeywell, and other companies with exposure to the oil & gas and process automation in general.

On the other hand, the project delays are still largely seen as sentiment-led issues that could turn, given a resolution of concerns over global trade. Ultimately, the key takeaway from Farr's commentary is that the global trade standoff does matter.

As such, many industrial stocks, and the willingness of CEOs to commit to large-scale process automation projects (primarily in oil & gas), are likely to bounce around based on speculation over a resolution to the trade conflict.