Pinduoduo remains unprofitable, but its adjusted net loss narrowed year over year from RMB 673.4 million to RMB 411.3 million ($59.9 million), or $0.04 per share -- which beat expectations by $0.15. Do those numbers indicate that Pinduoduo is catching up to market leaders Alibaba (NYSE:BABA) and JD.com (NASDAQ:JD)?

That approach has helped Pinduoduo gain ground across China's lower-tier cities, and it's making progress in top-tier cities like Beijing, Shanghai, and Hangzhou. It recently stated that orders from those top-tier cities accounted for 48% of its total order value in June, up from 37% in January. Its total GMV (gross merchandise volume), or the value of all goods sold across its platform, surged 171% to RMB 709.1 billion ($100 billion).

Pinduoduo's average monthly active users (MAUs) rose 88% annually to 366 million during the quarter, and its number of active buyers over the past 12 months rose 41% to 483 million. Those numbers indicate that it has more active shoppers than JD, which grew its number of annual active customers just 2% to 321 million last quarter. Alibaba remains in the lead with 755 million mobile MAUs across its Chinese marketplaces.

Those numbers seem to indicate that Pinduoduo is bigger than JD, but it generates only about 5% as much quarterly revenue as JD because its order sizes are much lower. Like Alibaba, Pinduoduo doesn't take on any inventories. JD takes on inventories and handles logistics as a direct retailer (which enables it to generate higher e-commerce revenues than Pinduoduo or Alibaba), but that approach requires much more capital.

However, the average active buyer on Pinduoduo spent RMB 1,467.5 ($206.90) on the platform over the past 12 months -- a 92% jump from a year earlier. This indicates that Pinduoduo's push into higher-tier cities -- Alibaba and JD's core markets -- is paying off. Moreover, the economic slowdown in China could benefit Pinduoduo as shoppers rein in their spending and hunt for deeper discounts. 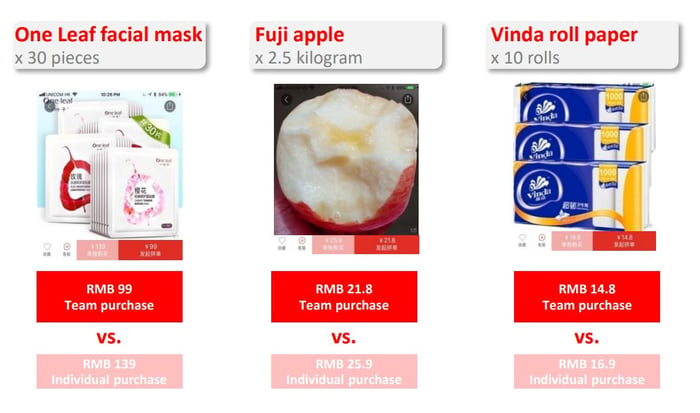 Last November, I told investors to avoid Pinduoduo because its losses were widening at an alarming rate. However, Pinduoduo's second-quarter numbers indicate that it's keeping its costs under control.

Pinduoduo's robust revenue growth and lower marketing expenses offset its higher cost of revenues and narrowed its net loss -- which indicates that its business might be more sustainable than I initially thought. Its cash position is also strong -- it ended the quarter with RMB 40.7 billion ($5.9 billion) in cash and equivalents, up from RMB 30.5 billion at the end of 2018.

But big challenges still loom on the horizon

Pinduoduo's second-quarter numbers were encouraging, but I'm still reluctant to buy this stock for two reasons. First, it will face much tougher competition from Alibaba and JD as it pushes into top-tier cities -- and both rivals are profitable companies with deeper pockets and bigger ecosystems.

Second, it still faces claims that its platform carries counterfeit goods. Pinduoduo and Alibaba's Taobao are still listed on the U.S. Trade Representative's notorious blacklist of counterfeit marketplaces, which claims that many of Pinduoduo's "price-conscious shoppers are reportedly aware of the proliferation of counterfeit products" on the platform, but are "nevertheless attracted to the low-priced goods."

The report also notes that "several brands issued public notices to warn consumers that products listed on Pinduoduo.com under their brand names are counterfeits." That reputation makes it a soft target for U.S. and Chinese regulators as the trade war focuses on IP violations.

Pinduoduo is becoming a major rival for Alibaba and JD, but its shaky reputation and lack of profits prevent me from recommending it as an investment. Until I see narrower losses and a clearer focus on flushing counterfeit products from its marketplace, I'll stick with profitable market leaders like Alibaba and JD instead.