Please ensure Javascript is enabled for purposes of website accessibility
Log In Help Join The Motley Fool
Free Article Join Over 1 Million Premium Members And Get More In-Depth Stock Guidance and Research
By Keith Speights – Aug 24, 2019 at 7:29AM

Rumors that Amgen plans to buy Alexion might not become reality. But a deal would make a lot of sense.

Is a major biotech buyout in the works? Spanish television network Intereconomia recently reported that Amgen (AMGN -0.22%) is in discussions to acquire Alexion Pharmaceuticals (ALXN). Intereconomia cited unnamed sources that said a deal could be announced soon, with Amgen potentially offering around $200 per share for Alexion, which would translate to close to $45 billion.

These are only unconfirmed rumors at this point. But Mizuho analyst Salim Syed thinks that the possibility of a deal happening "doesn't sound too crazy."

I agree. Here are three reasons why Amgen actually could move forward with an acquisition of Alexion. 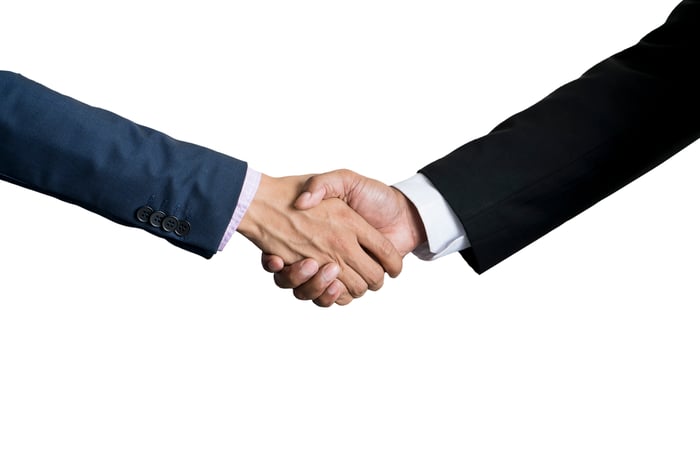 1. The one conflict isn't so problematic

There's one key conflict for Amgen with buying Alexion: Amgen is developing its own biosimilar to Alexion's Soliris. The big biotech has already completed a phase 1 clinical study for the biosimilar.

Amgen CEO Robert Bradway didn't specifically mention the Soliris biosimilar in his comments during the company's latest quarterly conference call. However, he did say, "We believe biosimilars will play an increasingly important role in helping to address issues of access and affordability in the U.S. and around the world, and we are excited to be a leader in this emerging space."

It might not seem to make sense that Amgen would acquire a company that it's hoping to compete against. However, Alexion picked up additional patents for Soliris that extend its protection for the drug through 2027.

It's possible that Amgen thinks that the growth potential of Alexion would be worth scrapping one early stage biosimilar program that's years away from being able to generate revenue. Amgen could be playing a chess game where it's willing to sacrifice a pawn to improve its chances of winning.

Amgen's core therapeutic areas are bone health, cardiovascular, hematology/oncology, inflammation, and neurosciences. Bradway has been consistent in his remarks about potential acquisitions that Amgen is likely to focus on -- what he calls the company's "stated areas of therapeutic interest."

More importantly, Alexion could help reignite growth for Amgen. Alexion's new drug Ultomiris appears to be a worthy successor to Soliris. Market researcher EvaluatePharma ranked Ultomiris as the top new drug launch of this year and projects sales of $3.5 billion by 2024.

3. No problems with the price tag

Bradway said in Amgen's Q2 conference call that "we continue to look at opportunities large and small." There should be no problems with the reported price tag of $45 billion to acquire Alexion.

Amgen reported a cash stockpile of $21.8 billion at the end of the second quarter. The company continues to generate solid cash flow. With interest rates remaining low, Amgen could easily afford to take on additional debt to fund the acquisition of Alexion.

In addition, paying $45 billion or so for Alexion seems like a reasonable deal. Alexion's shares currently trade at less than 11 times expected earnings with a price-to-earnings-to-growth (PEG) ratio of only 0.67. The rumored acquisition price reflects a premium of around 70%, which isn't bad considering Alexion's discounted valuation and strong growth prospects.

While there are some good reasons why Amgen could buy Alexion, don't hold your breath. Intereconomia has reported on potential acquisitions in the past that didn't materialize. Even Mizuho's Syed qualified his positive remarks about the potential buyout, saying that "we can debate the validity of the source."

The reality is that there are a lot more rumors of deals than there are actual deals in the biotech world. Investing in biotech stocks can be very profitable, but making decisions based on rumors isn't a good idea. That being said, Alexion appears to be an attractive pick for long-term investors -- regardless of whether or not Amgen considers it an attractive acquisition target.

2 Top Healthcare Stocks to Buy for the Long Haul
351%