Please ensure Javascript is enabled for purposes of website accessibility
Log In Help Join The Motley Fool
Free Article Join Over 1 Million Premium Members And Get More In-Depth Stock Guidance and Research
By Beth McKenna - Aug 25, 2019 at 9:00AM

A change is coming to the C-suite at the struggling 3D printing company.

The C-suite at the 3D printing company, which is engaged in a turnaround effort, is getting a lot of use out of Philadelphian Theophilus Van Kannel's nifty 1888 invention, the revolving door. Booth will be 3D Systems' third financial leader in just over three years. 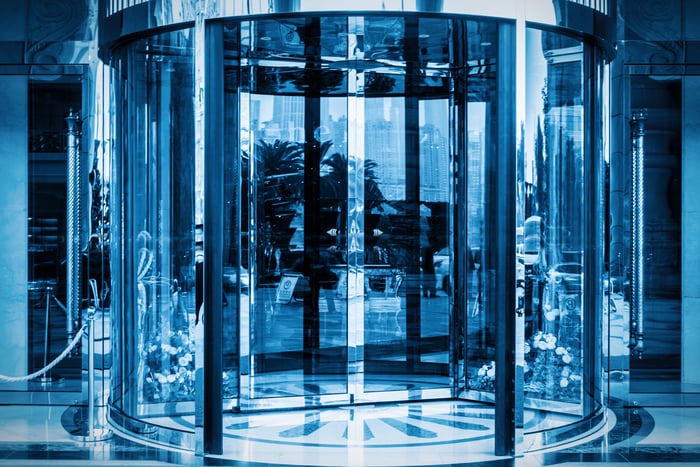 Who is Todd Booth?

Booth reportedly has 25 years of financial leadership experience at large and mid-sized companies across a wide range of industries, from automotive and defense to electronics and marine. "Most recently, he was CFO for Teledyne Marine where he successfully led a complex, global transformation," according to 3D Systems' press release. Florida-based Teledyne Marine, which is comprised of a group of companies that are part of Teledyne Technologies, provides a broad range of subsea technologies.

Does a new financial leader matter?

Only time will tell if and how much a new CFO will matter for the South Carolina-based company, which has been struggling to grow revenue since 2015 after a several-year 3D printing boom period went bust and has been unprofitable from a trailing-12-month basis since early 2014.

This CFO move isn't a surprise. In mid-March, soon after the company reported its fourth-quarter 2018 results, 3D Systems revealed via a regulatory filing that McMullen notified the company that he intended to retire as executive VP and CFO effective as of Dec. 31, 2019, or earlier if a successor was hired before then.

We can't know the impetus for McMullen's departure. He may have simply been ready to retire or he might have been nudged along in his decision by CEO Vyomesh Joshi, who could believe that a new CFO might be able to better help spur the growth that's alluded the company under his and McMullen's tenures. To be fair, the two have stabilized the company to some degree since they both came on board in 2016. In April of that year, Joshi joined 3D Systems, which had been operating without a permanent CEO for about six months following the abrupt departure of its former chief executive, who had held the top spot for 12 years. Soon after, Joshi snatched McMullen from Eastman Kodak, where he had been serving as CFO. The two execs had worked together at what was then Hewlett-Packard Co. and is now HP Inc.

3D Systems' 2016 shake-up at the top extended beyond the CFO role. The company's former COO and former Chief Marketing Officer both left in June of that year. Neither of these positions has been filled, to my knowledge, which we can probably assume is because of the company's streamlining and cost-savings efforts.

Stratasys, which is also in the process of a turnaround, has also had its share of turnover at the top in recent years. It's been operating without a permanent CEO for a year now after the unexpected departure of Ilan Levin, who held the reins for two years.