Avoid the riskier aspects of investing in penny stocks and consider these three companies with high upside instead.

The temptation of getting rich quick drives many investors to consider penny stocks, and that can be a huge mistake. The market for buying and selling penny stocks is illiquid, easily influenced, and highly speculative -- all factors that make successful penny stock investing difficult. If you're looking for high-upside stocks and are willing to take some risk, three Motley Fool contributors have companies you should consider before buying penny stocks: Booking Holdings (BKNG 3.46%), ANGI Homeservices (ANGI), and NIO (NIO 0.81%).

This "expensive" stock is actually cheap

Brian Feroldi (Booking Holdings): I know firsthand just how tempting it can be to buy penny stocks. I focused exclusively on buying them when I started investing because I mistakenly believed it was better to own lots of shares of a $1 stock than just a few shares of a $100 stock.

My instincts were dead wrong. Nearly every single "cheap" stock I bought ended up losing me money. Why? Because they tend to be lousy businesses that aren't profitable and have no competitive advantage. Wall Street punishes these bad businesses by knocking down their share price to under $1.

I later learned that the price of a single share is meaningless. It doesn't matter if you own one share or 1,000. What matters is how much capital you have invested in a company and whether the company is worth owning in the first place.

Consider Booking Holdings, the parent company of popular travel sites including Booking.com, Priceline.com, Kayak.com, Agoda.com, and more. One share of this company costs $1,952 right now, so the old me would have instantly written this company off as "too expensive." However, Booking is expected to earn $101.98 in profit per share in 2019, and that number is expected to jump to $115.76 in 2020. Some quick math shows that shares are trading for less than 17 times next year's earnings. That's cheaper than the average company in the S&P 500. 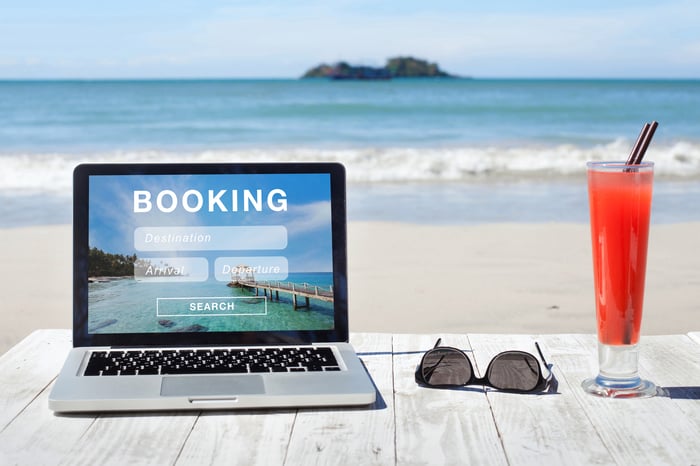 Booking Holdings is still in growth mode, too. Market-watchers expect Booking's profits to grow by more than 12% annually over the next five years. That's a very respectable number for a business currently valued at more than $80 billion.

I know it can be a psychological challenge to buy a share of stock when it looks on the surface to be so "expensive," but every stock investor needs to learn to look past the share price and make decisions based on the company's underlying value. Booking Holdings is a great example of that principle in action.

A bargain stock with a long-term tailwind

However, long-term investors are better off avoiding the kind of pump-and-dump, fly-by-night names often found among penny stocks. Instead, growth-seeking bargain-hunters may want to look at ANGI Homeservices, which has fallen to less than $10 a share and seems to offer considerable upside potential.

Created in 2017 from the merger of IAC's (NASDAQ: IAC) HomeAdvisor and Angie's List, ANGI Homeservices is now the country's biggest marketplace for home services including plumbing, painting, general contracting, and small jobs such as house cleaning. The company has also delivered solid growth through the first half of this year, with revenue up 18%, and appears to have a good foundation from which to build a network of sustainable competitive advantages, as the company provides a valuable service connecting buyers and sellers of home services. The company should also see a long-term tailwind over the next 10 or 20 years as more millennials, who grew up with the internet, become homeowners.

Nonetheless, the market has been skeptical of the stock, and shares fell to a post-merger low recently, after the company slashed its EBITDA guidance in its second-quarter earnings report, because of challenges related to search-based marketing. Those issues, which centered on Google traffic that came from paid rather than free clicks, seem largely fixable and temporary. That means now looks like a great time to scoop up some shares of ANGI Homeservices, with the stock down 57% over the past year, as the long-term value proposition and growth strategy are very much intact.

Daniel Miller (NIO): Some investors flock to penny stocks with the allure of dream-like overnight returns. Many of those investors choose to overlook that penny stocks often don't meet financial requirements or the transparency required to trade on the New York Stock Exchange or Nasdaq, making them much more risky and speculative. If you're willing to accept such risk and volatility from a stock, take a look instead at a stock such as NIO, a Chinese premium electric-vehicle (EV) maker that offers high-risk, high-reward returns but meets more stringent rules and regulations to trade on the NYSE. 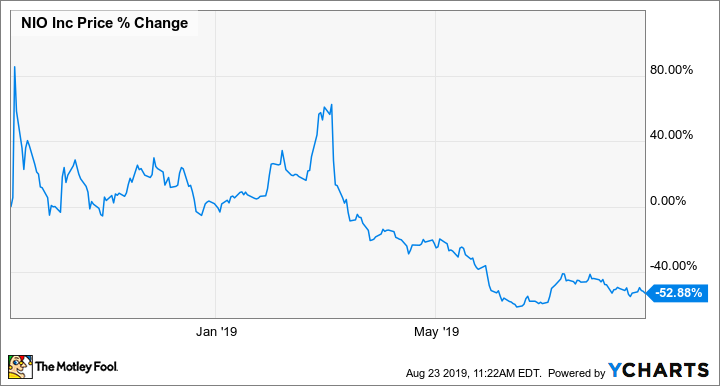 It's been a tough ride for NIO investors since the company's initial public offering. NIO's business has faced headwinds that include a decline in China's passenger vehicle sales on a year-over-year basis for 13 of the past 14 months, although electric vehicles have been slightly more resilient to the slowdown, increasing U.S. and China trade tensions that has made everything more uncertain, and a battery recall that included 4,803 of its ES8 cars.

While trade tensions and China's automotive slowdown are out of NIO's control, it has managed to complete its battery recall in roughly half of its original projected timeline and believes August sales will rebound for a much stronger month. The company is also well positioned as a premium EV maker in China, which in 2018 accounted for more than half of global EV sales, at 1.2 million units. In 2025, it's anticipated that China's EV sales will hit 5 million units and that by 2040 will account for almost 70% of global vehicle sales. That's a serious growth story.

NIO has hit a speed bump over multiple challenges, but there's no denying the premium EV maker has huge upside, as China's EV market is poised to surge in the coming decades.