Please ensure Javascript is enabled for purposes of website accessibility
Log In Help Join The Motley Fool
Free Article Join Over 1 Million Premium Members And Get More In-Depth Stock Guidance and Research
By Keith Speights – Aug 26, 2019 at 7:15AM

These stocks have cannabis connections without being cannabis stocks themselves.

But some investors remain uneasy about putting their money into cannabis stocks. If you fit into this category, there are alternatives you might want to consider. Three great ways that you can profit from the cannabis boom without actually buying pot stocks are to instead buy shares of Constellation Brands (STZ 0.03%), Shopify (SHOP -1.42%), or Square (SQ 1.74%). 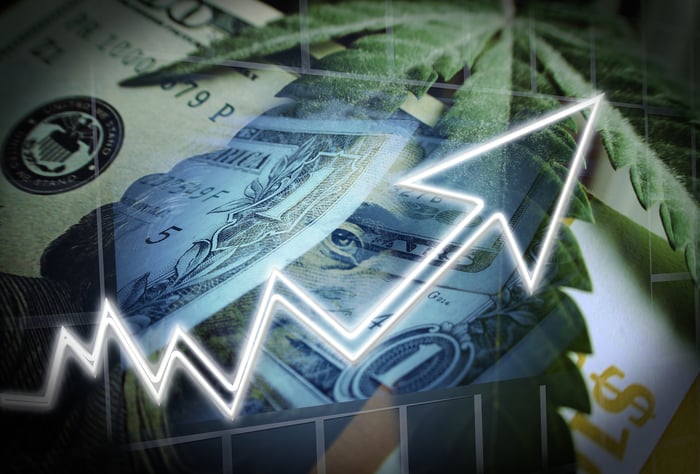 Constellation Brands is best known for its premium beers Corona and Modelo. But the alcoholic beverage company dipped its toes into the water of the cannabis industry in 2017 by buying a 9.9% stake in Canadian cannabis producer Canopy Growth (CGC 4.38%). It then jumped in headfirst last year by investing another $4 billion in Canopy, increasing its ownership to 38%.

In addition to its big stake in Canopy Growth, Constellation also owns warrants that, if exercised, would give the company majority control of the cannabis producer. It already exerts a significant influence on Canopy: Four of its nominees serve on Canopy's board of directors, two of which are executives at Constellation Brands.

The only negative in the company's beverage business has been in wine and spirits. However, Constellation recently sold several of its lower-priced wine brands to E. & J. Gallo. This deal enables the company to focus more on its premium wines.

You might not think of Shopify as a cannabis play. The company provides an e-commerce platform for small businesses. But guess what? Quite a few of those small businesses operate in the cannabis industry.

Shopify scored a major coup last year when Ontario selected its platform for all online retail sales of recreational cannabis in the province, which is the largest in Canada based on population. The company also signed deals to power the e-commerce business for Canopy Growth, HEXO, and The Green Organic Dutchman, three of the top six biggest Canadian cannabis producers ranked by production capacity.

Most of Shopify's revenue, however, doesn't stem from the cannabis industry. In fact, the word "cannabis" or anything related to it wasn't even mentioned in Shopify's latest quarterly conference call. But there was plenty of discussion about a new product that could fuel the company's growth for a long time to come -- its new fulfillment network.

Shopify is basically enabling small businesses to compete with Amazon.com by taking care of all of the logistics involved with fulfilling customers' orders. It even allows small businesses to ship their products to customers within two days. Cannabis is important to Shopify, but its new fulfillment network could be the most critical factor that drives the company's long-term growth.

Shopify isn't the only fintech company that serves the cannabis industry. In the past, payment processing and financial technology leader Square shied away from working with cannabis-related companies. But things have changed.

Square quietly launched a pilot program a few months ago to offer credit card processing to companies that sell cannabidiol (CBD) products. For now, it's still an invitation-only beta program for a limited number of CBD products. However, the U.S. legalization of hemp in late 2018 paved the way for massive growth in the hemp-derived CBD market. This appears to have opened the door for Square to inch into the market itself.

These initial steps by Square into the CBD market aren't significant enough at this point to move the needle for the stock. However, there are plenty of other reasons to consider buying Square. For one thing, the company's current ecosystem, which includes payment processing, business lending, and its Cash App for sending money, has a lot of room to grow.

Even better, Square's current products and services give it a launching pad to expand into plenty of new areas. It's easy to envision the company offering high-yield deposit accounts or investing products in the future.

None of these three stocks are pure-play pot stocks, but each of them could benefit from the expansion of the global cannabis industry. For investors looking for the strongest tie to the cannabis market, Constellation Brands is the best choice. Right now Square has the smallest connection to cannabis, with Shopify falling somewhere in between. But while these three stocks provide varying levels of closeness to the cannabis industry, I think they'll all deliver solid growth over the long run for patient investors.

5 Top Stocks to Buy In November