Someone check the calendar -- is it really November already? While you're preparing for the upcoming holiday season, it's not a bad time to appraise your stock investments for the year, and bone up on potential new purchases.

To this end, we checked in with five of our top contributors to see which stocks are catching their attention as potential buys in the month of November. From a beaten-down contrarian pick, to a beverage company with a taste for mergers and acquisitions, our contributors returned a wide range of actionable ideas. To see their picks and understand their reasoning, read on!

Rick Munarriz (SeaWorld): It's so easy to hate SeaWorld Entertainment (NYSE:SEAS) these days. The theme park operator has been posting sluggish attendance trends since the Blackfish documentary drew unwanted attention to the practice of killer whales in captivity. The bottom line has taken a big hit, and the once-promising entertainment stock that went public at $27 two years ago is now a busted IPO.

You don't like SeaWorld. You might even hate SeaWorld. There's a method to my contrarian madness. For starters, turnstile clicks are starting to stabilize. In fact, attendance at SeaWorld's parks rose 0.7% through the first six months of the year. We'll know how the seasonally potent summer quarter played out when SeaWorld reports financial results on Nov. 5. Other theme park and regional amusement park operators have reported encouraging results, and analysts see year-over-year improvement at both ends of the income statements.

A few days later -- on Nov. 9 -- CEO Joel Manby and his team will make a presentation on the meandering chain's new strategy to get back on track. It may not give activists what they want and free Shamu, but it wouldn't be a surprise if it emphasizes how it sees rides and animal-free experiences as the key to winning back patrons.

Even if the turnaround at SeaWorld takes time, investors have the meaty 4.2% yield to reward them for their patience. Between the possibility of a strong quarter and a stronger strategy presentation in the coming days, they may not have to wait long at all.

Daniel Miller (GM): Despite being in a capital-intensive and cyclical industry, General Motors (NYSE:GM) is a stock to consider in November because the company's business is thriving with low gas prices and easily available credit fueling sales of highly profitable SUVs and full-size trucks. That's a great start, but beyond surging sales of SUVs and trucks, GM's growth story in the near term is less risky for investors.

Consider that crosstown rival Ford's growth story largely revolves around its progress in China. Unfortunately for investors hoping that company can capitalize on China's growing middle class for huge sales gains, the country's economic uncertainty is stalling those plans. General Motors already has a dominant share in China, along with Volkswagen, and its growth story is less risky because it partly revolves around the rapid potential growth of GM Financial.

In GM's third-quarter, GMF hit record quarterly net revenue of $1.7 billion. As you can see in the graph below, GMF's contribution to GMs profits is expected to rapidly increase by 2018.

Much of this growth will come from GMF's increased presence at dealerships in North America; in the third quarter, GMF as a percentage of GM retail sales nearly tripled from 11% to 32%, compared to last year's third quarter.

In addition to GM's more certain growth strategy, its global product continues to be extremely fresh, which will be a tailwind for global sales growth. 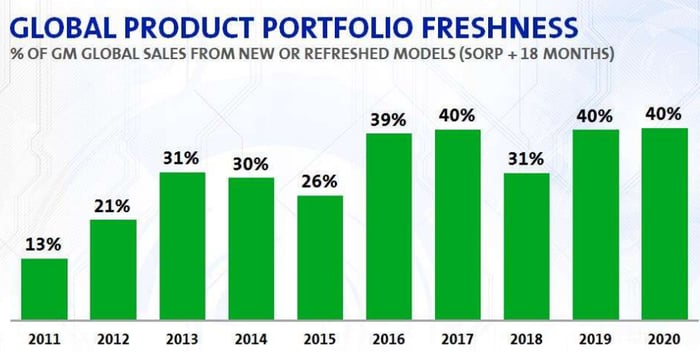 Despite many investors being cautious about investing in such a capital-intensive business, it's clear that GM has strong momentum heading into November and the last quarter of 2015.

The reason is simple. More than a decade of investing has taught me that there's one simple rule to follow when investing in defense stocks, and it is this: Defense stocks historically tend to circle a valuation of one-times annual sales. Priced at a market capitalization greater than their annual revenues, defense stocks tend to sink back to 1-times revenue. Priced below 1-times revenue, on the other hand, they tend to rise.

Right now, the defense stock with the lowest valuation in terms of sales -- priced at 0.76 times sales, to be precise -- is Huntington Ingalls. But if investing in a stock based on just one metric makes you nervous, have no fear. Huntington Ingalls also happens to be the cheapest big defense stock when valued on earnings (P/E) and on free cash flow (P/FCF) as well. This builder of nuclear submarines, aircraft carriers, and other surface warships costs just 12 times trailing earnings, and less than 9 times trailing free cash flow.

To my investing eye, that makes Huntington Ingalls not just the most attractively priced stock in a somewhat overvalued sector -- but an out-and-out bargain in its own right.

George Budwell (Dynavax Technologies): I think small-cap biotech Dynavax Technologies (NASDAQ:DVAX) is a good buy this month because it could be gearing up for a huge upward move within the next three to four months. For those that haven't been following this story, Dynavax's lead product candidate is an experimental-stage hepatitis B vaccine called Heplisav-B.

In 2013, the FDA declined the vaccine's regulatory application due to lingering concerns about potential safety issues. In a nutshell, there are products already on the market for this indication, so any new vaccines need to have a top-flight safety profile to gain approval.

To make a long story short, Heplisav-B has now completed three pre-specified safety reviews during its ongoing late-stage trial that's designed to be the centerpiece of the vaccine's revised regulatory application with the FDA. The top-line data from this study are expected to be announced in early 2016 and an amended regulatory filing should therefore occur in the first quarter of next year, according to management. That means that Heplisav-B could be on the market before the end of 2016.

The key issue right now is that there has been no reason to halt Heplisav-B's current trial following these safety reviews, meaning that the chances for an approval this time around are looking increasingly favorable. If approved, this vaccine is expected to generate somewhere in the neighborhood of $700 million annually in peak sales as a niche-product for hard-to-treat sub-populations such as diabetics, which would obviously be a considerable value driver for a company with a present market cap of only $860 million.

Asit Sharma (Constellation Brands): As 2015 winds to a close, I'm interested in companies that have not only posted great quarterly results so far this year, but show promise of continued earnings growth ahead. After all, if the long bull market takes a breather in 2016, holding stocks with vigorous earnings potential may provide a bit of insulation against overall market direction.

Constellation Brands (NYSE:STZ), which has climbed 37.5% year-to-date, is an example of a company that's performing well at present, but has a solid foundation for continued appreciation. Known primarily as one of the world's foremost premium wine and spirits sellers, the company is now the third-largest beer distributor in the U.S., having undertaken a massive $5.2 billion acquisition of Anheuser-Busch InBev's Mexican beer business in June 2013. The beer portfolio includes well-regarded brands such as Modelo, Corona, Victoria, and Pacifico.

In a little over two years since the purchase, Constellation's revenue and profits have more than doubled. The beer business has become the company's greatest asset, and Constellation is using profits to expand capacity at its Mexican bottling plant to gain further market share. It also continues to strategically acquire premium wine and spirits companies, such as Pinot Noir winery Meiomi, which it purchased this summer.

With a market capitalization of $26.5 billion, Constellation is of reassuring size, but it's still an expansion-oriented company. It trades at a forward P/E ratio of 27, which is in line with its much larger, but slower-growing peers Anheuser-Busch InBev (forward P/E of 22) and SABMiller plc (forwardP/E ratio of 26). Consider adding this aggressive yet stable consumer goods standout to your 2016 investment shortlist.