Please ensure Javascript is enabled for purposes of website accessibility
Log In Help Join The Motley Fool
Free Article Join Over 1 Million Premium Members And Get More In-Depth Stock Guidance and Research
By Chuck Saletta, Sean Williams, and Brian Feroldi - Aug 26, 2019 at 9:03AM

To help navigate that uncertainty, we asked each of three Motley Fool contributors to select a small-cap company that looks worthy of a potential investment now. They picked Inspire Medical Systems (INSP -0.32%), Planet 13 Holdings (PLNH.F -0.41%), and Fly Leasing (FLY). Read on to find out why they may be decent places to consider investing money today. 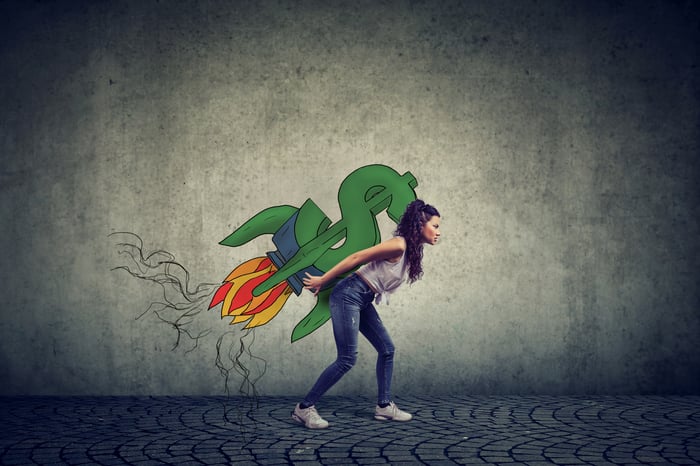 Brian Feroldi (Inspire Medical Systems): Almost a billion people around the world suffer from obstructive sleep apnea (OSA). The gold-standard treatment has been to use a continuous positive airway pressure machine, or CPAP, at night. While CPAP machines work well when used properly, the sad truth is that at least 35% of patients who try the therapy abandon it due to mask discomfort, nasal congestion, or other issues.

Inspire Medical Systems is on a mission to give these patients another chance. Inspire created an implantable neurostimulator that is inserted directly into the body with a minimally invasive surgical procedure. Once implanted, the device monitors the patients' breathing and delivers mild stimulation to the nerve that controls the tongue and airway muscles when a blockage is detected. This allows the airway to remain open all night long without the patient's having to do anything.

Sales of Inspire's device have taken off ever since it won FDA approval a few years ago. For 2019, analysts expect the company's sales to grow about 48% to $75 million, which is impressive given that this technology is brand new.

For investors, the good news is that Inspire is barely scratching the surface of what's possible. Management estimates that half a million patients in the U.S. could qualify for its device each year. At current prices, that represents a $10 billion opportunity. The numbers only get larger from there when you factor in the potential for label expansion claims and international expansion.

Inspire is still losing money, and it is trading for more than 24 times trailing sales, so its stock isn't for the faint of heart. However, if you're looking for a small-cap stock that holds enormous growth potential, then Inspire could be right up your alley.

This high-growth small-cap stock should have investors seeing green

Sean Williams (Planet 13 Holdings): Even though cannabis stocks have been nothing short of a train wreck since April, I continue to be impressed by small-cap dispensary operator Planet 13 Holdings.

The Planet 13 SuperStore just west of the Las Vegas Strip in Nevada is unique, which is why this stock stands out in a relatively overcrowded space. The company's SuperStore will be the largest in the world when complete, spanning 112,000 square feet. For context, that's about 7,000 square feet larger than the average-size Walmart (WMT -0.37%). But it's not just the size of Planet 13's store that has my attention. It's the experience, early-stage transparency, and margin-driving additions that really have me excited.

During the second half of 2019, Planet 13 will be opening a pizzeria, coffee shop, events center, and consumer-facing processing center at its SuperStore. Essentially, Planet 13 has become to cannabis enthusiasts what Disneyland is for families on vacation -- i.e., a must-see. No other dispensary offers the experience that Planet 13 brings to the table.

Since it opened its doors in November 2018, average visitor count per day has nearly doubled from 1,848 to 3,575, with the average ticket rising by close to $12. According to the company, which releases its average paying and visiting customer count as well as average ticket data each month, the company's flagship store is responsible for about 10% of Nevada's total legal weed sales.

As someone who's been to the Planet 13 SuperStore, I can tell you the layout is flawless, with high-margin derivative products near the entrance and checkout registers and lower-margin dried cannabis toward the back of the store. Further, the company has incorporated self-pay kiosks in select areas of its stores. While consumers will still have to wait for a personal budtender to grab and package the product they're buying, it creates a quicker buying experience than waiting in line.

Finally, as the icing on the cake, Planet 13 aims to open a 40,000-square-foot store in Santa Ana, Calif., just 10 minutes from Disneyland. If the company can replicate the success it's had in Las Vegas, Wall Street will have no choice but to begin taking it seriously. Currently trading at a little bit more than two times 2020 consensus sales, and fully expected to become profitable sometime in 2020, Planet 13 looks too attractive to ignore.

Who knew leasing planes could be so lucrative?

Chuck Saletta (Fly Leasing): Irish aircraft leasing company Fly Leasing saw its shares spike late last week on news that its income increased substantially and that it was able to accelerate its debt pay-down. Trading around a $650 million market capitalization  even after that spike, Fly Leasing certainly qualifies as a small-cap company. Still, despite that recent rapid increase, Fly Leasing still looks as if it may be worth considering as an investment.

The reason: valuation. Even after the recent run in its stock, Fly Leasing trades at around 0.8 times its book value and around six times its anticipated earnings. At prices like that, the company doesn't need much in the way of operational growth to have a good shot at delivering decent returns for its investors. It largely needs only to be able to keep operating and generating any sort of positive return on its substantial investments in aircraft.

Of course, those low valuation numbers do reflect the fact that the business of leasing aircraft is both economically sensitive and somewhat commoditized. Aircraft, after all, can move virtually anywhere in the world. That means that a competitor can swoop in fairly easily and undercut Fly Leasing's rates if the company starts to overcharge for its service. As a result, upside is likely limited to seeing the company reach closer to its book value. Still, that's around a 20% upside potential from here, which isn't bad.