On Sunday, Disney (NYSE:DIS) announced that it had embarked on a "creative retail collaboration" with Target (NYSE:TGT). The deal will include opening new "shop-in-shop" Disney stores at 25 select Target locations in the U.S. beginning Oct. 4. An additional 40 shop-in-shop locations will launch by October 2020.

The plans also include the opening of a new Target store at the Flamingo Crossings Town Center at the western entrance of the Walt Disney World Resort in Orlando, Florida, in 2021.

That's just the beginning of a wide-reaching pact that will likely be a win-win for both companies -- and their investors. 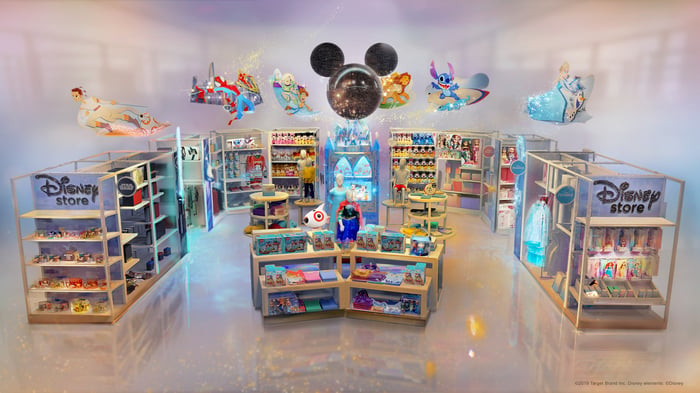 In a press release to announce the alliance, the pair said the partnership would "encompass experiential retail and merchandising," where Target shoppers would find an all-new, Disney-focused digital experience on the Target website beginning immediately.

The companies believe that they share a significant amount of consumer overlap due to their focus on families. Target and Disney worked together closely to "design an experience that will bring the magic of Disney store to Target guests in new and unique ways," Target said in a blog post. The locations will feature music, interactive displays, photo ops, and a seating area where families can watch clips from Disney movies.

The store-in-store locations will average 750 square feet and will be strategically located near the kids' clothing and toy departments in the Target locations. The concept will also be fully expanded in the digital realm by Oct. 4 at Target.com/Disneystore, also accessible through the Target app, which can be downloaded for both Android and iOS devices.

This wide-ranging deal will bring more than 450 Disney items to Target stores, including more than 100 products that were previously exclusive to Disney retail locations. The products will cover a wide range of Disney offerings, including Disney Princess, Star Wars, Marvel, Disney Junior characters, classic Disney plush, apparel, home, and holiday-specific products. It will also have collectible merchandise, including the Disney Animators' Collection with dolls, clothing, and accessories. The items will range in price from $2 to $200, though the companies said many products will be available for less than $20.

"We believe the combination of Disney's unmatched entertainment and storytelling with our omnichannel retail platform will create inspiring and unique experiences for our guests," said Brian Cornell, chairman and chief executive officer of Target. "This collaboration reflects the strength of our platforms and assets to create value for guests and growth for both companies beyond the traditional retail model," he added.

"Disney and Target share a common vision to provide our guests and consumers with innovative and unique experiences, and high-quality product," said Bob Chapek, chairman, Disney Parks, Experiences and Products.

Consumers and investors will both win

Disney recently reorganized its business segments in anticipation of the acquisition of certain assets from Fox, so it no longer breaks out the results of its consumer products business -- but a look back at last year can help put this into context. For fiscal 2018, Disney's consumer products and interactive media segment generated $4.65 billion, nearly 8% of the company's revenue (prior to the merger). This helps to illustrate not only the breadth but also the importance of this segment to Disney's overall results.

Meanwhile, Target investors are celebrating, as the retailer recently surged to an all-time high after reporting second-quarter results were far better than many expected. This move will no doubt help the retailer expand on its current efforts to generate in-store experiences for shoppers. Another recent effort by Target was teaming up with HGTV celebrities Chip and Joanna Gaines on their Magnolia line of home decor products.

Disney has more than 200 retail locations worldwide, but the additional 65 store-within-a-store locations represent a significant expansion of its footprint, making it a win for Disney. The locations will also no doubt draw additional foot traffic to Target, especially since the stores will have more than 100 products that won't be available anywhere else except at the Disney Store.

That's the definition of a win-win for investors of the two companies.