At the beginning of the year, the Canadian oil and gas producer Encana Corporation (NYSE:OVV) acquired Newfield Exploration in a $5.5 billion all-stock transaction.

Encana's goal was to diversify its production away from the challenging Canadian oil and gas environment. And, despite the extra $2.2 billion debt that came with the deal, management increased the dividend and extended the share buyback program.

A few weeks ago, Encana reported its first earnings with the full contribution of its Newfield assets. Given the importance of the transaction, the results provided an opportunity for a closer look at the performance of the company and discuss the capital allocation decisions. 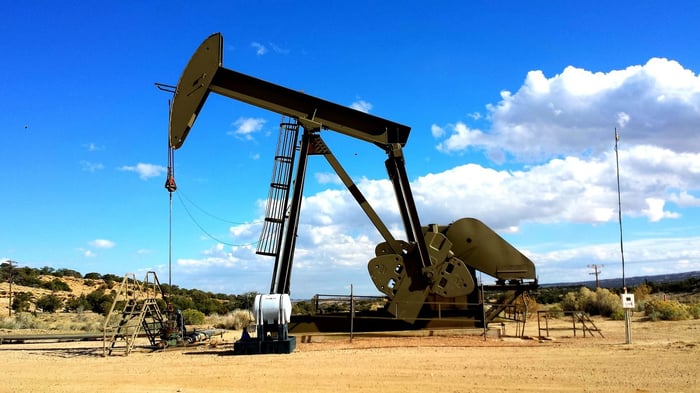 Thanks to an average West Texas Intermediate price (benchmark for crude oil) close to $60 per barrel during the last quarter, Encana reported strong results. With the Newfield assets, production grew 75.1% year-over-year and reached 591,800 barrels of oil equivalent per day (boe/d). And the company reported non-GAAP cash flow of $877 million.

Due to the Newfield acquisition, net debt increased by $2.2 billion and amounted to approximately $6.89 billion at the end of the quarter. But thanks to the strong cash flow, management highlighted that leverage -- calculated as annualized EBITDA divided by net debt -- was 1.7x.

But with a front-end loaded capital program in 2019, Q2 production was higher than the forecasted full-year production. The midpoint of the 2019 production guidance corresponds to about 558,000 boe/d.

Besides, commodity prices are volatile. And due to the tensions between the U.S. and China, WTI prices recently dropped below $55 per barrel. Lower oil prices will further reduce the expected cash flow and increase the leverage.

Considering the exposure to the volatile oil prices and the important leverage, I would have preferred management to focus on reducing net debt instead of increasing the dividend by 25%.

Also, the share repurchase program represented an important cash outflow of about $1.04 billion during the first half of the year. Buying back shares provided value to shareholders, though. Since the beginning of the year, Encana bought shares at an average price of $5.46. As a comparison, the company issued 543.4 million shares for the $5.5 billion Newfield acquisition, which values the issued shares at about $10.12.

And the new share buyback program management recently updated with a target price in the range of $4.15 to $4.75 is even more attractive compared to the value of the issued shares.

Besides, buying back shares is accretive to shareholders due to the low valuation of the company. Management indicated a capital program in the "low $2 billion range" would hold production flat. Based on the commodity prices during Q2, cash flow would exceed $3 billion. Thus, with free cash flow of at least $1 billion and a stock price at $4.14, the market capitalization represents less than 6 times the potential free cash flow.

Despite the strong Q2 results, the leverage is still high and the company is exposed to volatile commodity prices.Thus, instead of increasing the dividend, I would have preferred management to focus on decreasing net debt to reduce risks.

The share buyback program represents another important cash outflow that increases leverage. But considering the low valuation of the company, buying back shares at a stock price below $4.75 provides good value to shareholders.

The net debt and the leverage will be important aspects to watch during the next earnings.