These are all positive signs that faster networks are indeed coming soon, but the Boingo announcement was by far the most important of the three tandem press releases -- at least from my viewpoint as an armchair wireless network student.

The next evolution of wireless communications networks holds a lot of promise. 5G will enable more than just faster download times -- it can accurately and reliably connect more devices, and the latency (the time it takes data to travel between two points) is also much lower. These improved abilities could be the key to opening and enabling new use cases for smart cities, connected business operations, and ultra-high-definition video and gaming, not to mention yet-to-be-invented ideas.

Deploying 5G has been easier said than done, though. As of right now, there's a trade-off between speed and network coverage. At its fastest, 5G makes use of the high-frequency part of the spectrum known as "millimeter wave." The problem is that this high frequency is easily interrupted by walls, doors, and windows, and generally has a very short range -- no more than a couple thousand feet from the small cell tower and signal is lost, versus many miles of range for 4G. Lower frequencies that approach those the current 4G network use can also carry 5G, but at slower speeds. Though those lower frequencies sacrifice speed, they can travel much further and do a better job at getting through anything that's not air.

Thus, 5G at its speediest could end up being a technology for densely populated urban areas, with other more sparsely populated suburban and rural areas getting a slower version. But there is still the problem of walls and other solid substrates, of which cities have many, blocking the signal. It's a problem that both businesses and consumers want solved, as 5G isn't exactly revolutionary if it's only for city streets.

That explains why Verizon has teamed up with Boingo. Boingo builds WiFi networks at large-scale venues (think airports, stadiums, office buildings, and multi-family communities) using antenna systems and small cells. Verizon said it is working with the indoor network provider to get its 5G off the streets and behind the doors and walls where the people are. Details on what that entails are scant so far, but the partnership could be key to helping Verizon make its vision for a connected future a reality. 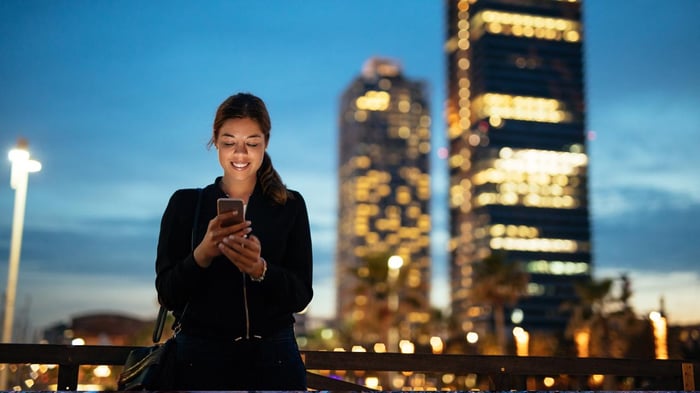 Why Verizon needs to solve the problem

T-Mobile (NASDAQ:TMUS), which is merging with Sprint (NYSE:S) to improve its own ability to build out a 5G network, is taking a different approach to its next-gen network rollout. Much of T-Mobile's spectrum is lower frequency, and therefore the company believes it can make 5G available across the whole country rather than just in urban centers. AT&T (NYSE:T) is also quickly deploying 5G in cities across the U.S., and upgrading its 4G technology everywhere else to optimize its speed (AT&T is calling that 5Ge, while the rest of the mobile industry, along with consumers, know it as 4G LTE).

Of course, 5G is in its infancy, so the technology will continue to improve and real-world results could yield findings that change the game. However, there is a difference between what Verizon owns in the way of spectrum and the route T-Mobile is taking. Verizon has a shorter but faster spectrum aimed at cities, while T-Mobile is going for slower but broader coverage. It won't be the peak speeds or latency that 5G can offer, but it's still a step up from 4G LTE.

Verizon's work with Boingo could be a big step in the right direction, though. Most Americans live in cities, and densely populated areas and facilities could ultimately benefit the most from 5G -- think connected factories, hospitals, and entertainment venues. If Verizon and Boingo can broker a peace between 5G and walls, it should be able to maintain its lead as the largest wireless provider in the U.S. as the new technology reshapes the industry.