What should investors think about ExxonMobil’s debt dilemma?

ExxonMobil (XOM 2.97%) used to be one of the most profitable companies in the world. At one point, it was an investor's best friend, producing consistent positive growth. In years past, it has been anything but. Over the past five years, the stock is down approximately 32% and down 15% over the past year. Its stock currently trades around $67.50.

Too often, investors look at a company's balance sheet, see that its long-term debt is just a fraction of its total assets, and infer that it's financially sound. Chances are, they're correct, but it can't hurt for investors to better understand the structure of its debt to be sure.

How much debt does ExxonMobil have?

ExxonMobil issued $7 billion of both floating and fixed-rate notes on August 14. The company plans to use the net proceeds of $6.975 billion to refinance some of its existing commercial paper, which has an average interest rate of 2.37%. ExxonMobil will also use some of these funds for other general corporate purposes, including working capital, acquisitions, capital expenditures, and other various business opportunities. It's not a bad position to be in and many companies would love to borrow $1.5 billion at 3.095%, repayable in 30 years. But investors shouldn't be as excited about owning ExxonMobil's 2049 notes, however, which yield slightly more than 3% for three decades. It's an excellent deal for ExxonMobil, though. 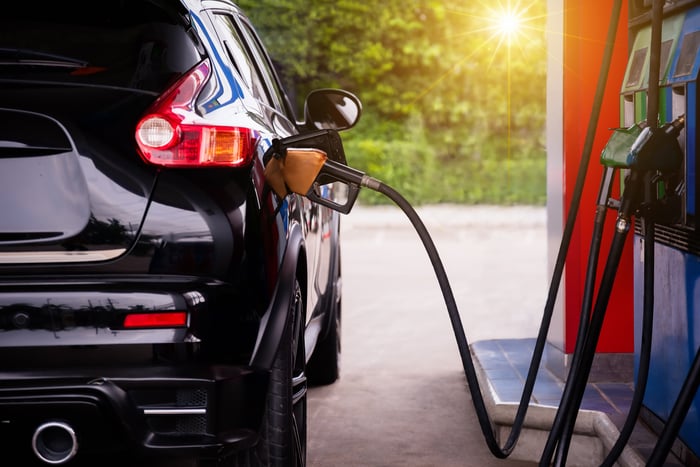 ExxonMobil's negative free cash flow and rising debt levels in the first half of this year are pressuring its credit profile, particularly with oil prices averaging mid-cycle levels during the period. While this notes offering is refinancing some of the company's debt on a longer-term basis, the company retains ample flexibility to reduce debt through asset sales and strengthen its credit metrics.

In its prospectus for the notes, the company mentions that its long-term debt, currently $19 billion at the end of June, is 8.7% of ExxonMobil's total market capitalization. Throw in the $7 billion in notes and it increases to 11.6% of its total market capitalization. That's still a minimal amount for ExxonMobil. By all accounts, ExxonMobil's debt is perfectly manageable and could be shrugged off by investors in the future.

However, what happens if the company decides to make a multi-billion dollar acquisition? As Moody's suggested, the company's free cash flow was negative in the first six months of 2019. A significant acquisition would certainly add to that shortfall. ExxonMobil's free cash flow for the first six months appears to be positive to the tune of $2.9 billion (net cash provided by operating activities of $14.3 billion minus capital expenditures of $11.1 billion). However, Moody's likely factors in some oil-related adjustments to come to a negative number.

According to S&P Global Market Intelligence, its competitor Chevron (CVX 1.82%) has free cash flow over the past year of $18.5 billion, 25% higher than its GAAP profit for the same period. Meanwhile, ExxonMobil generated $11.3 billion, 36% lower than its GAAP profit. Furthermore, Barclays said ExxonMobil's free cash flow situation is about to get even worse as it cranks up its capital investment just as oil prices appear to be dropping yet again. In April, the price of oil was around $66 at its peak, today it hovers around $53. So while ExxonMobil has managed to release debt on a fixed-rate basis between 1.9% and 3.1%, if its free cash flow shrinks, it will have less available cash to pay down its debt down the road.

Over the past decade, owning ExxonMobil stock has been like owning a used jet ski, it's only going to get worse. It's unlikely to get much better anytime soon as more and more industries and companies shift away from dependence on oil, while ExxonMobil doubles down. Its 4.74% dividend yield is nice, but it's not enough to rock the boat barring the circumstances. All this being said, ExxonMobil's debt should not be taken lightly.

For ExxonMobil investors, this suggests it's smart to stay put for the moment. The company is strong enough and has a durable enough track record to be able to rebound from its current issues. That being said, ExxonMobil is not a buy right now for new money. Investors should keep it on their watch lists but currently, it's not worth picking up. Until oil prices start to recover again, ExxonMobil will most likely continue to fall for the time being.

An energy company that might be worth looking into instead is Vestas Wind Systems (VWDRY -3.94%). The Danish-based wind turbine company is one of the biggest wind turbine manufacturers and service providers in the world. With more and more of an emphasis being placed on renewable sources of energy, Vestas Wind Systems is an industry leader trending in the right direction.