The interesting thing about security company Allegion (NYSE:ALLE) is its long-term secular growth prospects from the increasing use of the Internet of Things (IoT) at work and in the home. This argument applies despite a superficially weak-looking set of second-quarter earnings and guidance. Here's why Allegion's long-term prospects are still very much intact.

A stock with prospects

There are three main reasons Allegion is attractive for long-term investors:

In a nutshell, the self-styled "pure-play global provider of security products and solutions" is an early adopter of a technology that is going to fundamentally change its industry in the coming years. Not only is it increasingly important for households and businesses to control and monitor the movement of people for safety and security reasons, but there's also a benefit to corporate productivity in monitoring staff.

All of these things are enhanced by the increasing convergence of electronics and mechanics in the lock and door-security market and the growth of IoT connectivity. 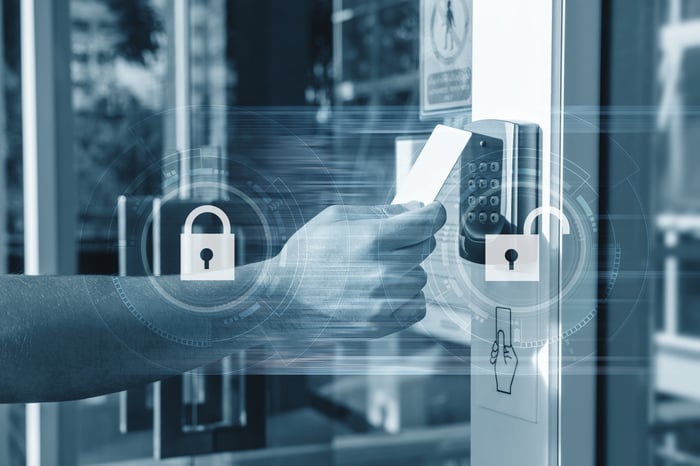 The stock has been in decline since the second-quarter earnings report, released at the end of July, and that's understandable given the confusing nature of the report.

Furthermore, during the earnings call, CEO David Petratis remarked that "our electronic growth for the quarter was negatively impacted by a slower-than-expected ramp-up in the new residential construction market and focused channel actions that we started in Q1 to drive more consistency and better alignment with our existing partners."

In plain English, this means the company's residential sales (which represent 30% of Allegion's total sales) weren't as strong as expected due to the new housing market being weaker than many had projected. By channel actions, he's referring to the sales channels (distributors, partners etc) that Allegion works with to ultimately sell into its end markets.Moreover, management lowered expectations for reported full-year growth in the Europe, Middle East, India and Africa (EMEIA) region to a range of a 2% to 3% decline, from a previous range of flat to 2% growth.

From this perspective, the report was negative, but there are three key reasons to look at it differently. I'll explain.

First, Petratis noted that the "channel actions" are now complete and "residential markets should start to improve versus what we have seen in the first half of the year." In addition, electronics growth in the Americas was 9% in the second quarter. That's certainly lower than the mid-teens percentage growth in 2018, but the expected recovery in Americas residential markets and ongoing strength in nonresidential sales growth (70% of Americas sales) mean that management actually raised its guidance for organic sales growth for this key region.

For reference, Allegion generated 73% of its sales and a whopping 91% of its operating income from the Americas in 2018.

Second, the main reason that the reported EMEIA sales growth (see above) was lowered was due to a combination of currency movements and the closure of its Turkey operations. The nonrecurring issue in Turkey led to a lowering of reported EPS guidance, but on an adjusted basis, Allegion actually raised its full-year EPS guidance.

To be clear about this, reported sales growth guidance in EMEIA was cut largely due to the impact of unfavorable currency movements, while organic sales growth was "reduced primarily
for closure of Turkey operations" according to the earnings presentation.

The key point here is that if you strip out the non-recurring items, and focus on the adjusted figure, Allegion actually raised its full-year EPS guidance.

Third, it's usually good to dig into what a company's peers and rivals say in order to get an idea of how valid your company's management commentary is. And here, there's reason for optimism.

For example, Douglas Martin, CFO at a competitor in the U.S. residential market, Spectrum Brands (NYSE:SPB), said in August that he "sees continued growth in its electronic deadbolt and smart-lock product lines, especially given relatively low and fast-growing U.S. residential adoption rates."

In addition, Allegion's direct competitor, Sweden's Assa Abloy (OTC:ASAZY), reported organic growth of 6% in its sales to the Americas region in the second quarter. Assa Abloy CEO Nico Delvaux said that he doesn't see any slowdown in the "strong dynamics on the commercial side" in North America, even though he noted a "slowdown on the residential side for new builds."

Is Allegion a buy?

Putting it all together, it's clear that Allegion's key nonresidential Americas market is in strong shape for 2019. The impact of the closure of its Turkey operation won't be repeated. Excluding that impact, the midpoint of Allegion's guidance puts it on a forward P/E of less than 20 times earnings and similar price-to-free-cash-flow multiple. That's a decent value for a company with such good long-term prospects.