Augmented reality (AR) often gets overshadowed by headlines about a similar technology, virtual reality, but AR may actually have more practical applications. Technology companies are already beginning to integrate AR into their services, like Google's AR Streetview for pedestrians, and retail companies are seeing the value of combining images of their products overlaid on top of real-world settings like living rooms.

It might be easy for investors to overlook the growing AR opportunity because the technology seems to be slowly trickling down to consumer applications right now. But make no mistake, AR is growing -- it will be worth an estimated $85 billion by 2025 -- and there are plenty of great companies betting on it.

That's why investors should take a look at what Autodesk (NASDAQ:ADSK), Lumentum Holdings (NASDAQ:LITE), and Apple (NASDAQ:AAPL) are doing in the AR space right now. 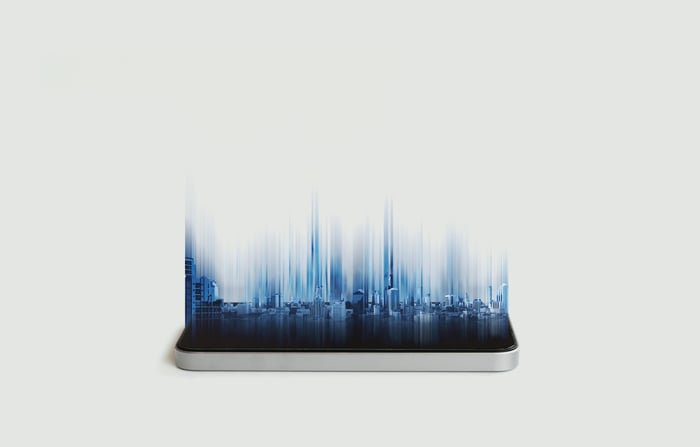 Investing in virtual nuts and bolts

Anders Bylund (Autodesk): Your augmented reality tools won't do much unless you can feed them some virtual objects. The 3D models of proposed gadget designs had to be created by somebody. I can't think of a single company with a deeper foothold in the creative side of virtual modeling than Autodesk.

Autodesk caters directly to the augmented reality industry by providing support, training, and plugins for it in many of its most popular software suites. This includes 3D modeling powerhouse 3DS Max, immersive game development platform Maya, virtual architecture tool Revit, and more. The company takes this niche seriously and is poised to profit from this opportunity for years to come.

The stock isn't particularly cheap right now, but investing oracle Warren Buffett always preferred buying fantastic companies at a fair price rather than hunting for deep-discount bargains at every turn. Autodesk recently reshaped its business model from perpetual software licenses to a modern subscription-based service structure. With that painful change fading in the rearview mirror, Autodesk's management expects to deliver $1.35 billion of free cash flow in the 2020 fiscal year, up from breakeven in 2018.

Augmented reality will play a significant role in Autodesk's drastic turnaround, not to mention the long-term opportunity it represents beyond this tipping point.

Honing in on growth with laser-like precision

Rich Duprey (Lumentum Holdings): It's been a rough ride for Lumentum Holdings as its prime customer, Huawei Technologies, was banned from doing business with U.S. companies. Since the Chinese tech giant accounted for 15% of Lumentum's revenue, it was a big hit to performance.

The early signs of a trade thaw between the U.S. and China have allowed Huawei to largely resume business with U.S. companies, although it's clear there is still risk, here, as any worsening of trade tensions could exacerbate an already tenuous situation.

CEO Alan Lowe contends Lumentum is "well positioned for fiscal 2020 and beyond" thanks to its market-leading standing in telecom and 3D sensing markets, growing cloud and 5G wireless network deployments, and an improved commercial laser business. Of course, there's recent acquisition Oclaro's expertise, too.

Finisar is obviously one source for the vertical-cavity surface-emitting lasers, or VSCELs, needed, but it may still need more from other suppliers, and it could lean more heavily on Lumentum. In short, there's still lots of opportunity for Lumentum Holdings to experience sharp growth going forward.

A slow but steady AR bet

Chris Neiger (Apple): When Tim Cook, the CEO of Apple, says things like, "I'm a huge, huge believer in AR," and "We put a lot of energy on AR," investors should pay attention.

Apple has been slowly, but consistently, rolling out new augmented reality features to its iPhones and iPads over the past several years, and it has also increasingly provided more tools to developers, including its ARKit, to build new AR apps.

With ARKit, developers have created apps that display furniture inside a user's living room right on an iPhone screen, and it's allowed General Electric employees to view industrial equipment with AR and make training easier than ever before.

The beauty of Apple's AR opportunity is that the company already has hundreds of millions of devices around the world that are AR-capable, which gives Apple one of the largest AR platforms around.

In addition to that opportunity, Apple has been rumored to be working on its own AR glasses, possibly as one of its next major devices. While those plans may be on hold for now (no one knows for sure) investors should remember that Apple is especially adept at blending devices and software -- which is central to AR technology.

All of this means that as AR grows, Apple is likely to benefit. The company is already emerging as a leader in this space, and its plethora of AR-capable devices as well as its commitment to AR app development should keep it ahead of the competition.