Heading into September signals a change in seasons and perhaps a change in the fortunes of some stocks, not least because trade tensions continue to rise. Yet some stocks should still do well regardless and investors would be wise to watch them next month.

We asked three Motley Fool contributors which stocks they thought would do well in September and beyond, and they chose Novavax (NASDAQ:NVAX), Workday (NASDAQ:WDAY), and Dollar General (NYSE:DG). Read on to find out why these companies are the ones to ring in the autumn investing season. 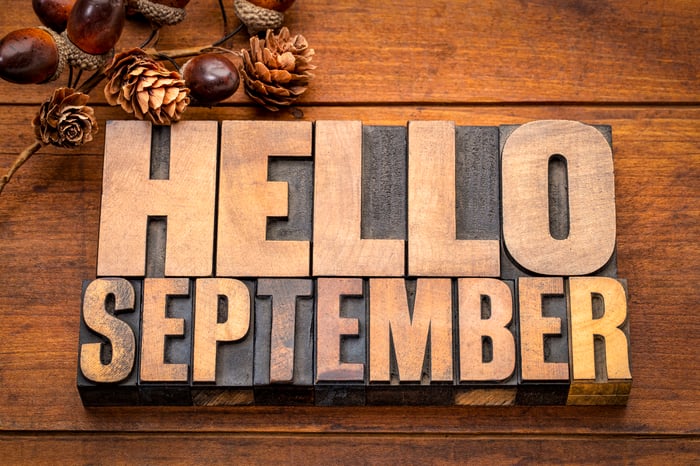 A prescription for volatility

George Budwell (Novavax): Novavax, a pre-revenue vaccine company, has been one seriously hot stock this month. Since Aug. 1, the biotech's shares have gained 44% at the time of writing, and this upward trend could very well continue for the remainder of the year.

What's behind Novavax shares' strong showing this month? Three key issues. Last June, the company cut a deal with Catalent Biologics to assume the leases for two of its product development and manufacturing facilities. This transaction should help to significantly lower the company's cash burn rate from here on out.

Secondly, Novavax recently announced that the Food and Drug Administration has signed off on the design of the company's late-stage trial for the experimental flu vaccine NanoFlu. If all goes according to plan, the biotech said it expects to have top-line data from this trial by the first quarter of 2020.

Lastly, the biotech unveiled a promising new data analysis for the experimental respiratory syncytial virus vaccine ResVax earlier this month. These more mature outcome data may be able to open the door for a surprise regulatory approval in one or more international territories. That's certainly not a guarantee, as the vaccine did miss the primary endpoint of its maternal immunization study earlier this year. But these longer-term data do at least provide a solid rationale for another late-stage trial.

Unfortunately, Novavax ended the most recent quarter with less than $80 million in cash and cash equivalents. The biotech therefore appears ripe for a substantial capital raise, especially with NanoFlu's late-stage trial set to get underway soon. Investors, in kind, should expect the biotech's shares to remain on the volatile side during the month of September and beyond.

Keep an eye on this enterprise SaaS company

Keith Noonan (Workday): With cloud-based solutions that are relatively versatile compared to on-premise alternatives, Workday has scaled its position in employee and project management software and now counts roughly 40% of Fortune 500 companies among its customer base. The enterprise software-as-a-service (SaaS) company currently has a market capitalization of roughly $42.5 billion and is scheduled to report its second-quarter results on Aug. 29.

The company managed to grow revenue roughly 33% year over year in the first quarter, and raised its full-year guidance thanks to the better-than-expected performance in the quarter and other positive indicators. Workday expects to post second-quarter subscription revenue of $747 million, which would represent roughly 32% growth year over year. It also expects $124 million in services revenue (a projected increase of 17% year over over), bringing its projected midpoint sales tally for the quarter to a $971 million figure that would represent 30% growth year over year.

Workday stock hasn't been gaining ground rapidly in 2019, with shares up roughly 18% year to date compared to gains of 17% for the S&P 500 index, so it probably faces less pressure to deliver big sales and earnings beats in the second quarter compared to other growth-dependent cloud stocks. However, the stock has managed to climb roughly 130% over the last three years thanks to impressive sales and client growth, and investors will be looking for more information on new customer additions and a more in-depth view of what to expect in the second half of the year.

Rich Duprey (Dollar General): The leading deep-discount retailer Dollar General is ready to report earnings this Thursday, and investors should be prepared for another strong result. Although the on-again, off-again nature of trade talks between the U.S. and China adds a level of uncertainty and volatility to this stock, which imports a large quantity of goods from China -- meaning the tariff blasts the two leveled at each other last week could roil future results -- both sides have said they're ready to come back to the negotiation table.

That's good news for Dollar General, which is rolling out 1,000 new stores this year and driving both sales and profits with the addition of more fresh goods and produce. The value proposition of dollar stores will actually only improve going forward, even if a trade war knocks the country back into a recession, because the breadth of selection at these stores, and at Dollar General in particular, means consumers will continue trying to stretch their wallets.

The chain also just partnered with FedEx to make Dollar General stores a drop-off and pickup point for packages, which could introduce a new type of customer to the company's stores, further expanding its opportunity.

While ill winds of a trade war are blowing, dampening some enthusiasm and muting expectations a bit, Dollar General remains a stock to watch this coming month and beyond.