Major benchmarks bounced between gains and losses on Wednesday following a weaker-than-expected retail sales report for September. The Dow Jones Industrial Average (DJINDICES:^DJI) and the S&P 500 (SNPINDEX:^GSPC) closed down modestly. Consumer discretionary was the strongest sector and energy stocks were the laggards.

As for individual stocks, Workday (NASDAQ:WDAY) plunged in the wake of some target price cuts by analysts, and Bank of America (NYSE:BAC) rose after reporting earnings. 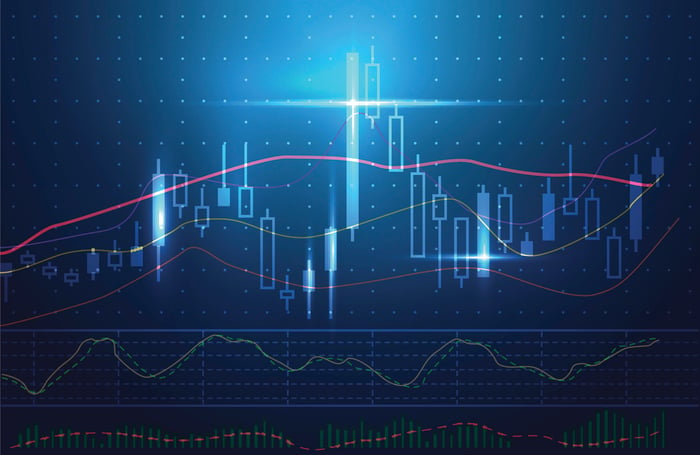 Shares of growth stock Workday took a beating today, falling 11.3% to $160.46 after some analysts lowered their price targets following the company's presentations at its investor day yesterday. According to TheFly.com, Stifel lowered its price target to $180 from $210, Deutsche Bank cut its target to $185 from $200, and RBC Capital set its price target at $212, down from $225.

Workday spoke at length yesterday about long-term opportunities for the software-as-a-service company to expand its offerings into new markets, but what apparently had analysts concerned was the outlook for its core business in human capital management (HCM). Co-President and Chief Financial Officer Robynne Sisco said that HCM, which today constitutes about 81% of the company's subscription revenue, can be expected to have a declining influence on its growth rate. The other 19%, consisting of financial products along with new offerings in areas such as procurement, are increasing subscription revenue at 50%, compared with 20% growth in core HCM software.

The expected drivers of Workday's future growth shouldn't have come as much of a surprise to investors, but analysts may be getting concerned that even 20% growth in HCM may get tough to maintain in the near term, despite recent strong results.

Bank of America is seeing a strong economy

Meanwhile, Bank of America reported third-quarter profits above what Wall Street was expecting and shares rose 1.5%. Earnings per share of $0.56 beat the analyst consensus of $0.51, and without a $2.1 billion one-time impairment charge resulting from a 2009 joint venture, they would have been up 14% from the period a year ago. Revenue, net of interest expense, was $22.8 billion, about as expected.

Most of the bank's net income growth came from consumer banking, where average deposits grew 3% and average loans increased 7%. For the company as a whole, net interest income rose 1% to $12.3 billion despite a drop in net interest yield to 2.41% from 2.45% in Q3 last year, thanks to growing loans and deposits. Bank of America's efficiency ratio held steady at 57%.

Executives on the conference call had encouraging words about the U.S. economy, saying it's in "solid shape," with consumer payments in the quarter slightly increasing from earlier in the year and commercial loan growth remaining strong.