Baidu (NASDAQ:BIDU) is the 800-pound gorilla of China's search market, with a 76% share of the overall market, according to StatCounter. Its closest rival, Sogou (NYSE:SOGO), ranks a distant second with an 11% share. Baidu dominates PC and mobile searches, but Sogou actually leads the growing market for voice searches. Let's see how Sogou took over that niche market and whether Baidu can fend off this disruptive challenger.

How did Sogou take over the voice search market?

Sogou launched Sogou Pinyin, a multiplatform replacement keyboard for typing Chinese characters, more than a decade ago. Its first-mover advantage made it China's dominant input method, and it eventually added voice typing and searches to the app. 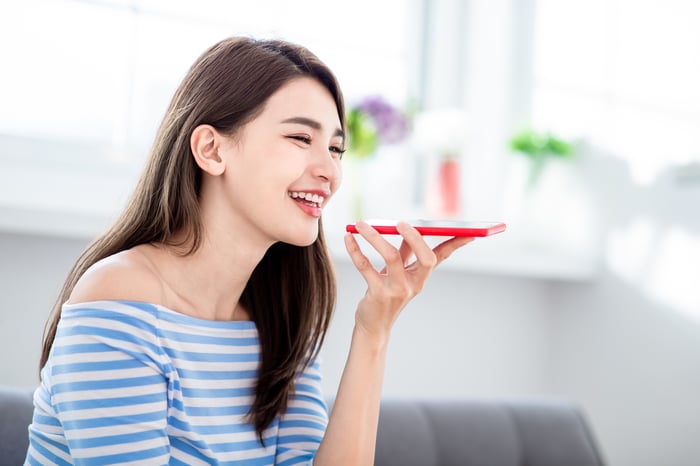 A recent survey by QuestMobile rated Sogou's Mobile Keyboard search app (also known as Sogou Input) as the ninth most popular mobile app in China with 454.5 million monthly active users (MAUs) in June. Baidu's app ranked 10th on that list with 453.3 million MAUs, which indicates that it might be losing mobile users to Sogou. Tencent (OTC: TCEHY), Sogou's biggest stakeholder, also integrates Sogou's search engine into WeChat, the most popular messaging platform in China and the top app on QuestMobile's list.

Sogou continues to integrate new features into the app, including translation tools and voice conversion features that let users speak in celebrity and cartoon voices. It's also expanding that ecosystem into the hardware market with smart devices like voice-activated smartwatches and translators. Like Baidu, Sogou leverages the data it gathers to improve its search features and develop new AI features for commercial use.

How is Baidu fighting back? 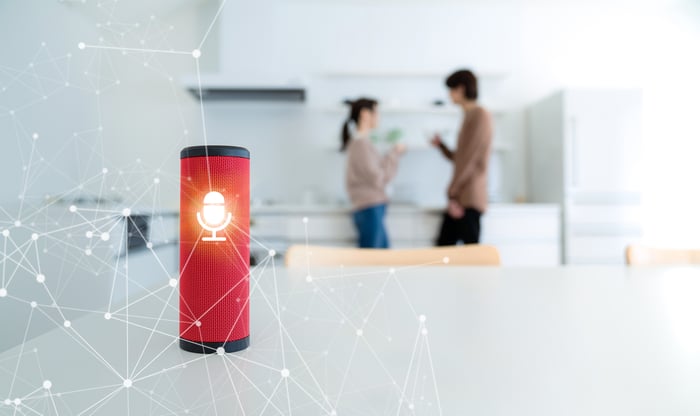 Last quarter, Baidu announced DuerOS had an installed base of more than 400 million devices, representing a 4.5-fold jump from the previous year. It also stated that DuerOS had more than 2,400 "skills," which include ordering things, checking weather and road conditions, and controlling smart home devices,)  and that the DuerOS developer community had grown to over 33,000 members. Baidu also noted that monthly queries on DuerOS rose 7.5-fold annually to 3.6 billion in June -- but that figure isn't directly comparable to Sogou's figure of 680 million daily voice queries.

Baidu also overtook Alibaba and Xiaomi as China's top smart speaker maker earlier this year, thanks to robust demand for its lower-end Xiaodu speakers and screens. Sogou doesn't have a meaningful presence in the smart speaker market.

Baidu also added voice search features to Baidu Maps. It claims that more than 240 million people had used those voice features as of June, marking a 2.5-fold increase from a year earlier. These robust growth figures indicate that Baidu is successfully leveraging its lead in the online search market to counter Sogou in voice searches.

The rapid adoption of DuerOS indicates that Baidu could eventually overtake Sogou as the leader in voice searches, but Sogou's keyboard app still gives it a strong foothold in the smartphone market.

On their own, voice searches are tough to monetize. However, they help search platforms like Baidu and Sogou evolve, reach more users, and predict behaviors -- enabling them to craft better-targeted ads across their ecosystems. Voice search platforms also widen moats by tethering users more tightly to the ecosystems.

Juniper Research estimates that the number of voice assistant devices worldwide will surge from 1.5 billion today to nearly 8 billion by 2023, with "significant growth" coming from China. That explosive growth bodes well for Baidu and Sogou.

Should Baidu worry about Sogou?

Baidu arrived late to the party with DuerOS, but the platform's robust growth rates indicate that it won't lose the market to Sogou. Baidu's lower TAC rates indicate that it can win the long game against Sogou, while its expansion of DuerOS into other markets -- including driverless cars via Project Apollo -- will help it remain a top search engine across multiple platforms.