Shares of Papa John's International (NASDAQ:PZZA) climbed 9.54% on Tuesday, after the company named a new CEO, a big step toward the company's goal of moving on after distancing itself from its controversial founder. Papa John's also reiterated its full-year fiscal 2019 guidance.

Before the markets opened Tuesday, Papa John's announced that Rob Lynch, formerly president of Arby's, has been named CEO. Papa John's earlier this year initiated a strategic plan that includes investments in marketing and improvements to its franchising systems. 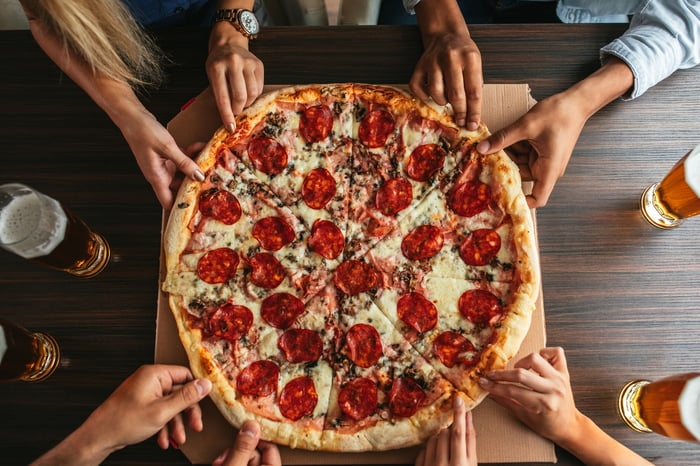 The pizza chain has been trying to rebound after a contentious split with founder and former CEO John Schnatter. He grew the chain to more than 5,300 restaurants but ran into trouble in late 2017, after he attributed Papa John's declining sales to National Football League players' kneeling during the national anthem and the NFL's handling of that situation. He then made comments deemed racially insensitive during a conference call with a marketing agency.

Schnatter in March agreed to resign from the company's board and dropped a lawsuit against the company but retains a large stake in the business.

Papa John's Chairman Jeff Smith, in a statement announcing the hiring of Lynch, said the new CEO is the right person to lead the company through its new chapter.

"His proven record transforming organizations and realizing the growth potential of differentiated brands is ideally suited for Papa John's as the company sets forth on its next chapter," Smith said.

Investors are hoping that Lynch's arrival at Papa John's will have a similar impact to what Brian Niccol has had since joining Chipotle Mexican Grill from Yum! Brands. Like Niccol's strategy at Chipotle, Lynch is expected to push menu innovation at Papa John's and speed restructuring at the chain.

Shares of Chipotle are up nearly 200% since Niccol came on board, while shares of Papa John's are down about 20% during that time period. If Lynch can get it right, Papa John's could be the stock to own in the restaurant sector for the next few years.